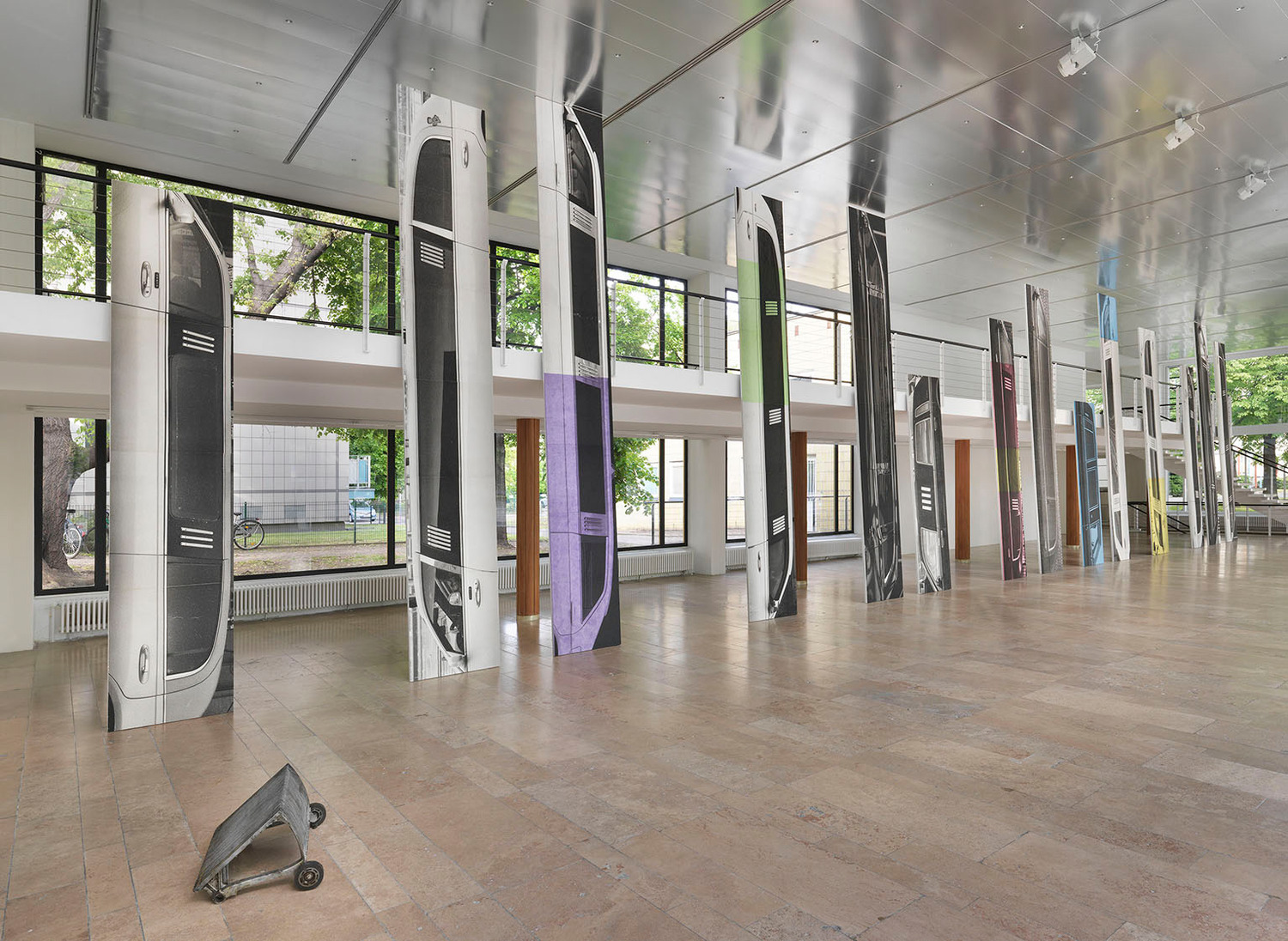 “Factory Tint”, the title of Adam McEwen’s first solo exhibition at Capitain Petzel, is a term taken from the car industry that refers to the percentage of window glass tinting or darkening. In the gallery’s main space fifteen life-size images of stretched limousines, inkjet prints on cellulose sponge, lean against the mezzanine.

In the context of a limousine, the term Factory Tint brings to mind the cars’ blacked out windows, darkened two-way mirrors which by preventing the person on the street from seeing who is inside, set up a power relationship between the interior and the exterior of the car. Part of the attraction of a stretched limousine, and the reason people rent them, is the promise of temporarily inverted power relations. The cars offer the illusion of escape – from work, from normality, from powerlessness. They exploit a certain kind of aspiration, while appearing to enable a temporary sense of movement: from normal life to a ‘special night’. The word factory also highlights the work aspect. Each limousine piece is titled after the driver of the car: “Esteban”, “Big Mike”, “Adelson”, “Camillo”, “Fernando”, all 2014. These drivers are working by the clock. The body of the car promises pleasure, but at the cost of someone’s labor.

As former prestige objects, now seen as kitsch and debased, limousines function today only as a projection screen for fantasy. They look the way they look purely in order to trigger emotions in the viewer: desire, curiosity, intrigue, fear, wonder, disgust, mockery. These vehicles are absurd and ridiculous: phallic, unwieldy, attention-seeking, pathetic. Adam McEwen is intrigued by the sculptural presence of the limousines as they move through New York City: exaggerated, unreal and irrational objects, loaded with conflicting ideas – sculptures on wheels.

As one enters the lower ground floor of the gallery, one is surrounded and enclosed by pulsing images of movement through tunnels, a multiscreen installation titled “Escape from New York”, 2014. The work is named after the 1981 movie by John Carpenter, in which Manhattan has been turned into a high-security prison. Filmed on a smart phone, the projections take the viewer out of Manhattan through the four tunnels that connect the island with the mainland: the Lincoln Tunnel, the Holland Tunnel, the Battery Tunnel and the Midtown Tunnel. In each case, as the camera is about to exit the tunnel the film loops back to the beginning, so one never actually escapes.

Adam McEwen forms icons out of the everyday hardware of popular culture. By selecting and focusing on apparently mundane objects – a cash dispenser, an air conditioner, a luxury vehicle – and rendering them in familiar but unlikely materials such as graphite or sponge, he foregrounds the melancholy and fictional promises that underlie capitalism.