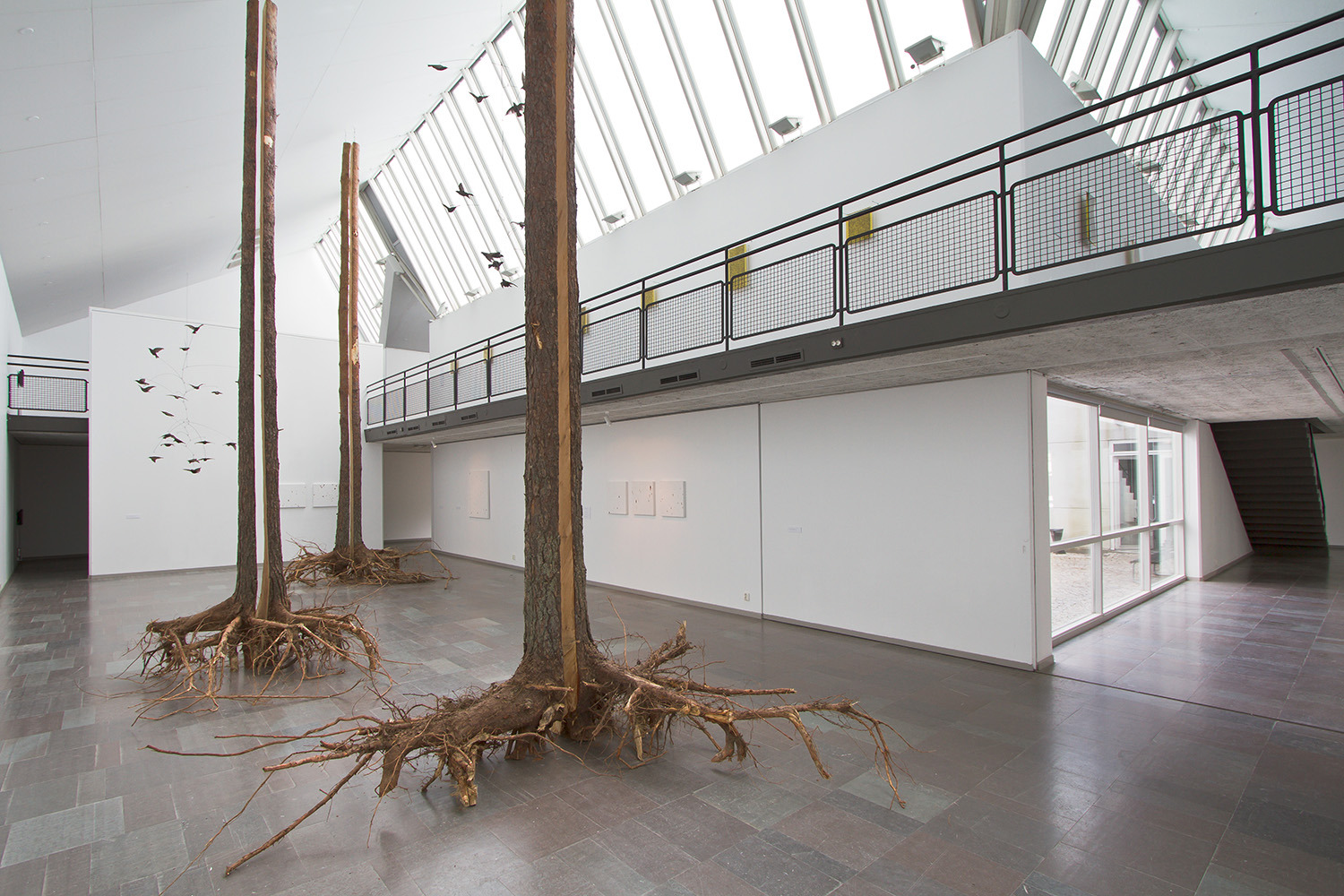 Henrik Håkansson is one of most internationally successful and renowned Swedish artists of his generation, but this is his first comprehensive solo exhibition in his own country in several years. Looking back at his production of the last twenty years we notice how consistently he works with the relation between nature and culture, but also how he varies his expression by using film, photography, sound and – not least – plants and live animals.

Håkansson’s current work is grounded in his thinking about wastelands. He refers to T. S. Eliot’s poem from 1922, The Waste Land, and to our negligence and mental confusion about nature, the gap between our knowledge and our actions in matters concerning ecology. Visitors to Lunds konsthall are confronted with a staged forest. Tall spruces have been uprooted and cut in half. This large installation fills the front and rear halls and have given the whole exhibition its title: A Forest Divided. The spruces come from the heath at Veberöd outside Lund, a forested area that is being cut down to restore an original and more open landscape. The trees are divided, spliced, with open wounds.

Around the divided forest there swarms of dark brown birds are hovering. These stuffed starlings once lived near an airport in northern Italy, where they were shot to prevent accidents and disruptions of traffic. They are mounted as hanging mobiles, a reference to one of the big names of 20th century Modernism, Alexander Calder. Such allusions to the history of art, music, cinema and literature is an important aspect of Håkansson’s practice, which unites the art-specific and the scientific.

This is a concentrated exhibition, but also varied and collage-like. It showcases Håkansson’s newest productions, but also wants to give viewers a general understanding of his art and how he thinks in images. Therefore it consists of a selection of inter-related works, mostly from recent years. Henrik Håkansson: A Forest Divided is to some degree a retrospective, but it does not aspire to provide a complete overview of his practice and career.

Lunds konsthall thanks the County Administrative Board of Skåne for their support to the realisation of the exhibition and all lenders, including the galleries Franco Noero in Turin, The Modern Institute in Glasgow and Meyer Rigger Berlin, as well as the Sten A Olson Foundation for Research and Culture in Gothenburg.

Henrik Håkansson was born in 1968 in Helsingborg, Sweden. He lives and works in Sweden and Germany. Håkansson graduated in 1991 from the Academy of Photography and in 1993 from the Dept. of Sculpture, both at the University College of Art, Crafts and Design in Stockholm. He has participated in many international group exhibitions, for instance the Venice Biennale (1997, 2003), the Berlin Biennial (2001), the São Paulo Biennial (2004) and the Yokohama Triennial (2011). He has had solo exhibitions at, for instance, Kunsthalle Basel (1999), Wiener Secession (2002), De Appel, Amsterdam (2003), c/o Moderna Museet at the House of the Nobility in Stockholm (2003), Dunkers kulturhus in Helsingborg (2004), Palais de Tokyo in Paris (2006) and Museo Tamayo in Mexico City (2008).