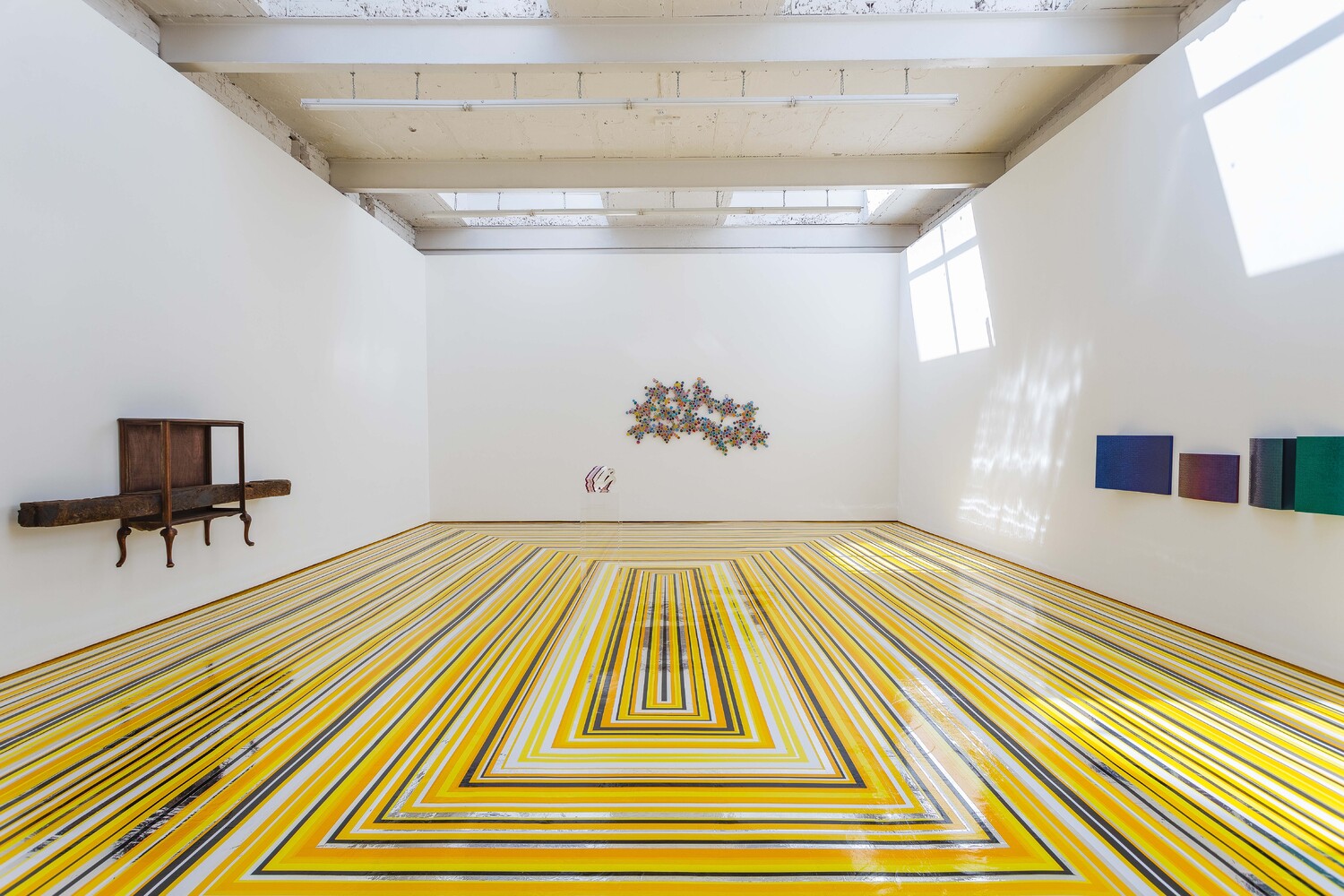 The Modern Institute is pleased to host Jim Lambie’s latest solo exhibition in the Airds Lane and Bricks Space galleries. Lambie’s flair in realising the potential of the everyday through upending our expectations of familiar objects and universal experiences distinguishes his prominent artistic output.

The exhibition’s title ‘Buttercup’ provides a pertinent introduction to the dualism that underpins his work, the source of which was graffiti that Lambie had seen, carrying with it an inherent hardness yet contradicted by the softness of the word. With this in mind, the latest reincarnation of his signature Zobop work (which returns to the city twenty-two years after its debut) establishes a meadow shimmering in varying yellows, chrome, black and white vinyl tape. Zobop’s concentric lines fill but don’t occupy space, instead accentuating the architecture to dazzling, rhythmic effect.

Often an expression of transition, the door is animated from stagnancy: its form bent, embodying a posture akin to a figure leaning against the wall. Pink Moon, its association with 1970s folk-rock cult figure Nick Drake’s song and album shares an uncanny coincidence with the show’s opening date, as April 26th is the first of only two Supermoons this year. Florescent yellow glows from the underside and reflects off the wall, apt given the moon is only visible owing to the sun’s reflection, the dynamic of which has been reversed in this nominal moon. Similarly, the sprawling constellation of Solarize, made from polychromatic sunglasses lenses fused together by lead – conjuring an element of Medieval stained glass – are activated by light: sending kaleidoscope rays bouncing off its surroundings, in essence representing the solar counterpart.

The liminal space is further encapsulated by Horizon (Goldfinch), at first appearing as polished undulating waves. Its chameleon paint surface forces the viewer to slow, as though following the drift of a soft breeze, in order to see the gradual change in colour; and in this contemplative moment, upon closer inspection it is revealed to be made from whole jigsaws bent to varying degrees. Rooted in a context that considers both physical and negative space, while complete, its images are erased and without reference cannot be reconstructed: these dichotomies are examples of the conditions that intrigue and stimulate Lambie.

Wood Beez is a heavy wooden display cabinet stripped to its core, its feet hovering above ground with a railway sleeper suspended in its centre – a performance of double levitation. This drifting between realms is further emphasised by the single sculpture that sits within this meditative environment, Butterfly (Belladonna Lily), balanced on top of a transparent acrylic plinth, effectively enabling it to float. Its form hints at an unpredictable motion, amplified by the layers of varying tones that are sandwiched between mirrored sides, as if to contain it from expanding out of control. In its realisation through industrialised manufacture, it anchors these dreamy elements in the real world, whilst preserving the properties of the artist’s hand.

Lining the main wall of the Bricks Space are seven adjoining monitors, each with a different hue to seemingly form a digital colour chart. This is interrupted as Lambie appears at various intervals to spray the camera lens with paint, obscuring his presence until the screen becomes a flat colour. Activated at different times, the colours change with each emergence of the artist, leading to a unique sequence each time. The contradiction of existence in multiple spaces but not really existing at all in Self Portrait (in Seven Parts) again echoes the polarities and a fascination with the notion of endlessness that is woven throughout his making.

Jim Lambie’s solo exhibition, ‘Buttercup’, will be open to public at Airds Lane from Monday-Friday 11am-5pm and Saturday 12-5pm.