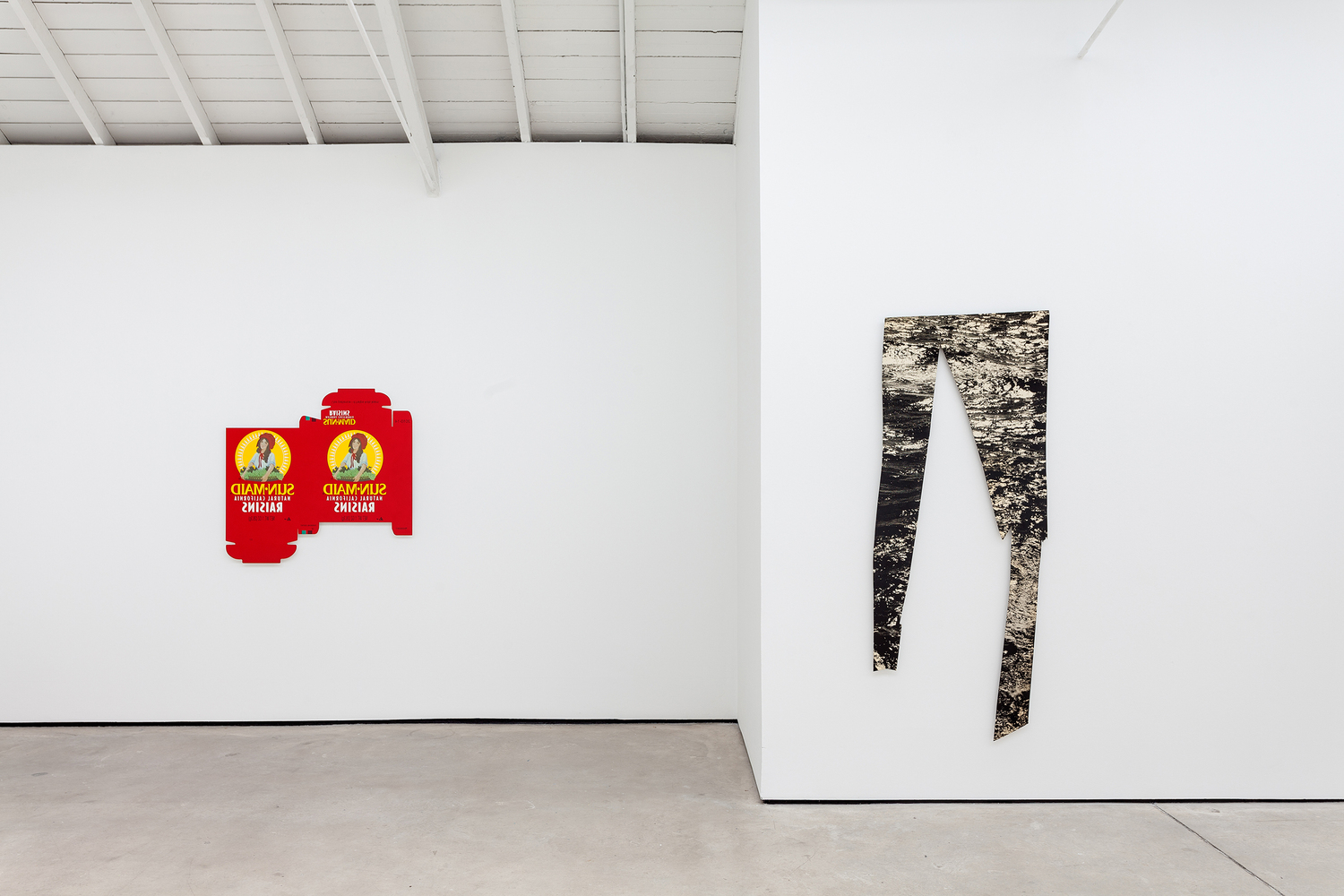 Kim Fisher’s third exhibition at The Modern Institute presents a new body of work composed of large-scale collaged pieces. These meticulously created screen-prints on cut aluminium sheets assume the form of oversized ripped and cut paper assemblages. Collage has always formed an integral part of Fisher’s practice, both in the preliminary conception of her works as well as the approach she takes while installing and arranging her works within an exhibition. The pieces escape the fragility of paper, yet retain the details and marks collected throughout the making process. Their sharp lines or paper-like edges highlight the negative space around, within and between them, giving them a sculptural quality.

Marking a departure from Fisher’s earlier paintings, this new body of work begins from a collection of photographs taken by Fisher on her walks throughout Los Angeles, where she lives and works – visual snippets of information surrounding her in daily life. This use of photographic imagery is the first time in which Fisher has used the camera to directly source her visual material as well as accumulating paper clippings from newspapers and magazine pages to incorporate into her works.

Within the exhibition we experience these images or signs as momentary clips of LA, as if entering a psychological space arranged by Fisher. We are drawn to focus on the social and cultural explorations inherent in these works – the ubiquitous high hedgerows and their privacy-seeking owners, the run-down ‘Jim’s Market’ remaining unchanged for decades, as if captured in time. We think about these works in terms of the changing face of LA and allow this to filter into our own thoughts and how we in turn experience and notice moments within our own surroundings.

The recurrent notion of the edge or the reverse is prevalent throughout these works: the hedgerow border, the inside of the wrapper, the reverse of the page – this suggests a remove or an obscuring from the original material. Further intensified by the process used to produce these works, the dislocation from their primary source becomes poetic and at times even melancholic, drawing us to the more oppressive concerns of the region.

Fisher exhibits extensively within America as well as internationally, selected solo exhibitions include: ‘If…we’, Shane Campbell Gallery, Chicago (2017); ‘A Little Bit of But’, LAXART, LA (2016); ‘Dirty Kitchen’, The Modern Institute, Aird’s Lane, Glasgow (2014); ‘Angus’, International Art Objects, Los Angeles (2013); John Connelly Presents, New York (2010); China Art Objects, Los Angeles (2007); and Midway Contemporary Art, Minneapolis (2003). In 2018, Fisher exhibited within ‘This Brush for Hire: Norm Laich & Many Other Artists’ at the Institute of Contemporary Art, Los Angeles, co-curated by Meg Cranston & John Baldessari); and in 2014, the artist participated in Hammer Museum’s ‘Made in LA’ group show, curated by Michael Ned Holte and Connie Butler. Fisher also presented work in the California Biennale and Whitney Biennale (both 2004) and exhibited as part of ‘Painting in Place’, Farmers & Merchants Bank, Los Angeles (2013); ‘Chasm of the Supernova’, Eagle Rock Center for the Arts, Los Angeles (2012); and ‘California Abstract Painting 1962-2012’, Woodbury University, Burbank (2012). LAXART recently published a book to coincide with Fisher’s 2016 exhibition, A Little Bit of But’. Her 2011 publication produced by The Modern Institute includes extracts by Joan Didion from ‘Slouching Towards Bethlehem’, which were first published in 1968.