Marc Hundley ‘In Another Country’ 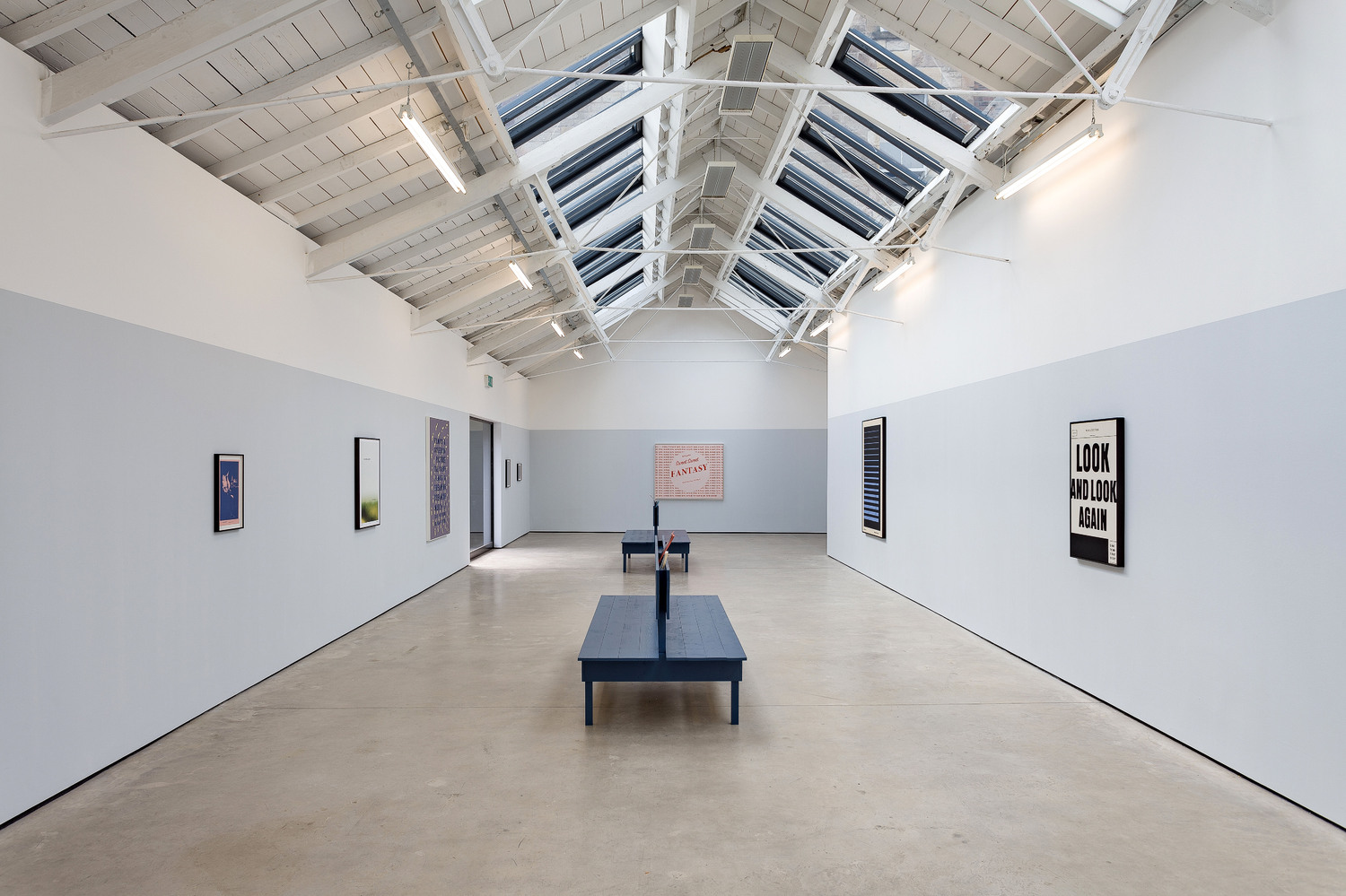 New York-based Marc Hundley’s practice is known for his unique way of encapsulating moments that can be considered intimate and solitary. Lyrics lifted from songs, text found in books and poetry, along with found imagery all lend themselves to Hundley’s hand-painted ‘posters’ and printed Xerox works, inscribed with the date and address of when and where the source was encountered.

The new works comprising ‘In Another Country’ – Hundley’s second solo exhibition at The Modern Institute – notably cite one address repeatedly, alluding to the passage of days confined to one location during the recent period of isolation, as a result of the pandemic.

Hundley weaves his account of the past few months over ten works hung in a conscious order through the gallery space. A foggy grey hue is painted 7 feet up the gallery walls, as two Breton blue benches sit in the center of the room, resembling seating in municipal waiting rooms or perhaps a library. As is often with Hundley’s exhibitions, he creates an inviting atmosphere to pause: seating he provides to allow more time to stop and consider, but also as settings for communal exchanges. The benches now represent another outlet of Hundley’s reminiscence and longing for interaction and company.

Beginning with Hundley observing New York emptying from the usual sound of traffic and people on the street, the start of the pandemic reverberates with sirens and bird song. The canvas work ‘Wishing you were far away’ (2020), details the early days of the shutdown, marked with fragments of The Jam’s 1981 song ‘That’s Entertainment’. The subsequent works present a non-linear collage of personal reflections, observations and emotions during a prolonged period of imposed isolation. Whilst much of Hundley’s earlier practice does touch on solitary moments of loneliness, loss and melancholia, the new pieces provide a personal narrative to an unprecedented collective experience. A framed Xerox print uses the imagery of George de la Tour’s ‘Magdalene with the Smoking Flame’, mirroring Hundley’s state of reflection on the present, and how it affects his feelings on the past and future as well. Referencing Brian Eno’s ‘Mother Whale Eyeless ‘, ‘Maybe They’re the Same’ (2020) questions if a change of location would provide a resolution – if In Another Country, the situation was different – or perhaps, just the same.

The refrain from Mariah Carey’s 1995 ‘Fantasy’ provides a sense of escapism in ‘When I Close My Eyes’ (2020) – dreaming of being elsewhere, or of fantasizing a person – immersing oneself in fiction rather than the reality of the present. This longing for a certain person, or social interaction and normality, leads Hundley to recall memories of elation after seeing someone.

Towards the end of the exhibition, the last few works steer towards a surrender to the merging of days – how the parameters of time have changed- falling asleep after an uneventful day only to wake up to another. The imagery in ‘Your Life Will Surely Change’ (2020) depicts blinds, an addition to Hundley’s windows as the lock down continued, a possible physical manifestation of his yearning for a diversion from the bleak present.

‘In Another Country’ concludes with the final canvas bearing the lyrics of Led Zeppelin’s 1970 song ‘That’s The Way’. Carrying the now historic date of May 26th, in which news reported Christian Cooper, a Black New Yorker, falsely accused in Central Park of threatening a White woman and her dog whilst peacefully bird-watching; and the announcement of George Floyd’s murder by the police. Hundley’s new works are bookended by two definitive events in the collective conscience: beginning with seclusion and silence, and the gradual longing and anger culminate at the event that would become the advent to a new global chapter.