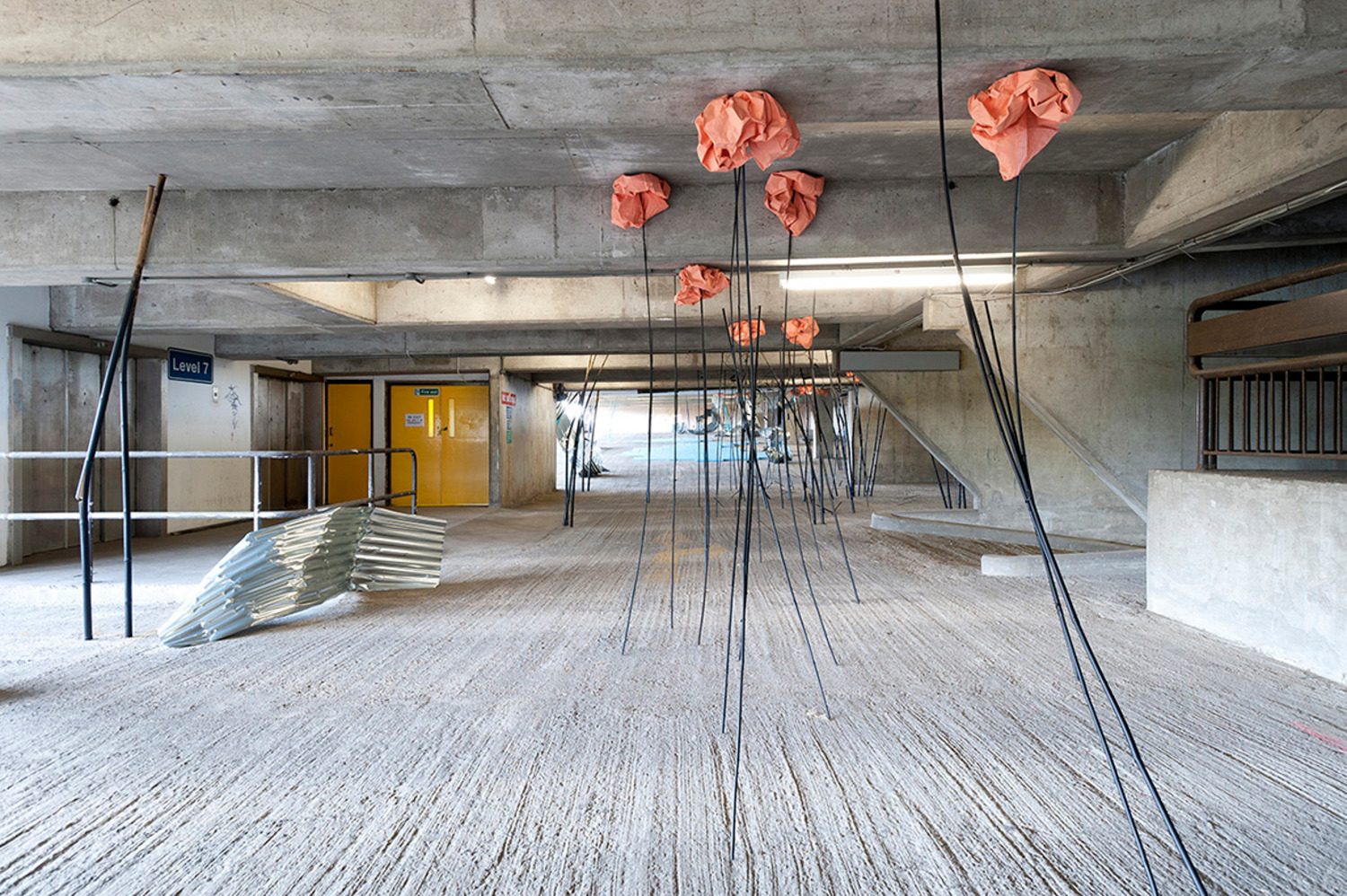 Bold Tendencies, the celebrated sculpture show dedicated to showcasing new work by international artists, held on the top floor of a disused multi-storey car park in Peckham, opens on 30 June and runs until 30 September 2012.
Bold Tendencies has commissioned six major large-scale new works for 2012 by:

Mary Redmond combines organic and industrial materials in the creation of sculptures and environments pervaded by a sense of ritual, even ceremony. Her work instils the sites of its installation with a sense of perfectly balanced suchness, giving the counter-intuitive impression (as one walks through a bamboo thicket on the seventh floor of a multi-storey car park) that reality as it is presented and performed here is experienced in a manner more direct, less cluttered, than elsewhere in our daily existence. This atmosphere of inscrutable poise, clarity and equilibrium is heightened by the simultaneous delicacy and strength of its constituent materials. In this instance, narrow sticks of bamboo prop up the concrete canopy, while crinkled sheets of stainless steel give the impression of having breezed like duff into the space. Small, smooth shoots suspend from the bamboo sticks and perch on the concrete floor, expressing an almost rapturous harmony between elements integral to the built environment. The disciplined arrangements of forms recalls the ancient art of ikebana and, as in that practice, the overall effect of the work is both transcendent and fleeting, momentary, mortal.

Mary Redmond (born in Glasgow in 1973) lives and works in the city of her birth. Among her solo exhibitions are Low Block Seasonal at The Modern Institute, Glasgow (2012); The Floating World at Dundee Contemporary Arts (2010). Recent and forthcoming group exhibitions include Studio 58: Women Artists in Glasgow Since WWII at the Glasgow School of Art’s Mackintosh Museum (2012); Undone: Making and Unmaking in Contemporary Sculpture at the Henry Moore Institute, Leeds (2010); I Must Say That At First it Was Difficult Work, Kunsthall Oslo (2010). She was the recipient of a Paul Hamlyn Award in 2009.

The accompanying Architecture Programme commissioned by Bold Tendencies, designed by Practice Architecture and built by Practice Construction consists of the Auditorium, built of straw and sited between the concrete slabs of level 7 & 8, a timber Foyer at the entrance to the project on Level 7 and Frank’s Cafe and Campari Bar on Level 10.
The 2012 Live Programme of music, dance, theatre, film and literary events is entirely free. We are collaborating with local organisations Southwark TV, The Elephant & Nun Festival, PAMI (Peckham Artist Moving Image Festival) and Copeland Book Market; curators Paul Purgas, Lucy Reynolds, Nina Cristante and Elise Lammer have been invited to devise projects specifically with the site in mind and new partnerships have been developed in dance with Sadler’s Wells, film with Skawinski & Marshall, with Musarc – part of the Faculty of Architecture and spatial design at London Metropolitan University – and in classical music with a specially commissioned new performance by the Bold Tendencies Orchestra.
Founded in 2007 and now in its 6th year, Bold Tendencies welcomed over 60,000 visitors in 2011. Committed to supporting the vision of artists and actively engaging audiences, admission is free with audiences ranging widely from local residents to international tourists.
Bold Tendencies is situated in the heart of Peckham on Rye Lane, amongst galleries and arts organizations Son Gallery, The Sunday Painter, Arcadia Missa, PAMI, Auto Italia South East, Peckham Space, The Last Refuge, South London Gallery, Peckhamplex Cinema, Royal Court Theatre Local, Peckham, Space Studios and Camberwell College of Arts. The South London Art Map brings everything together on one useful map.