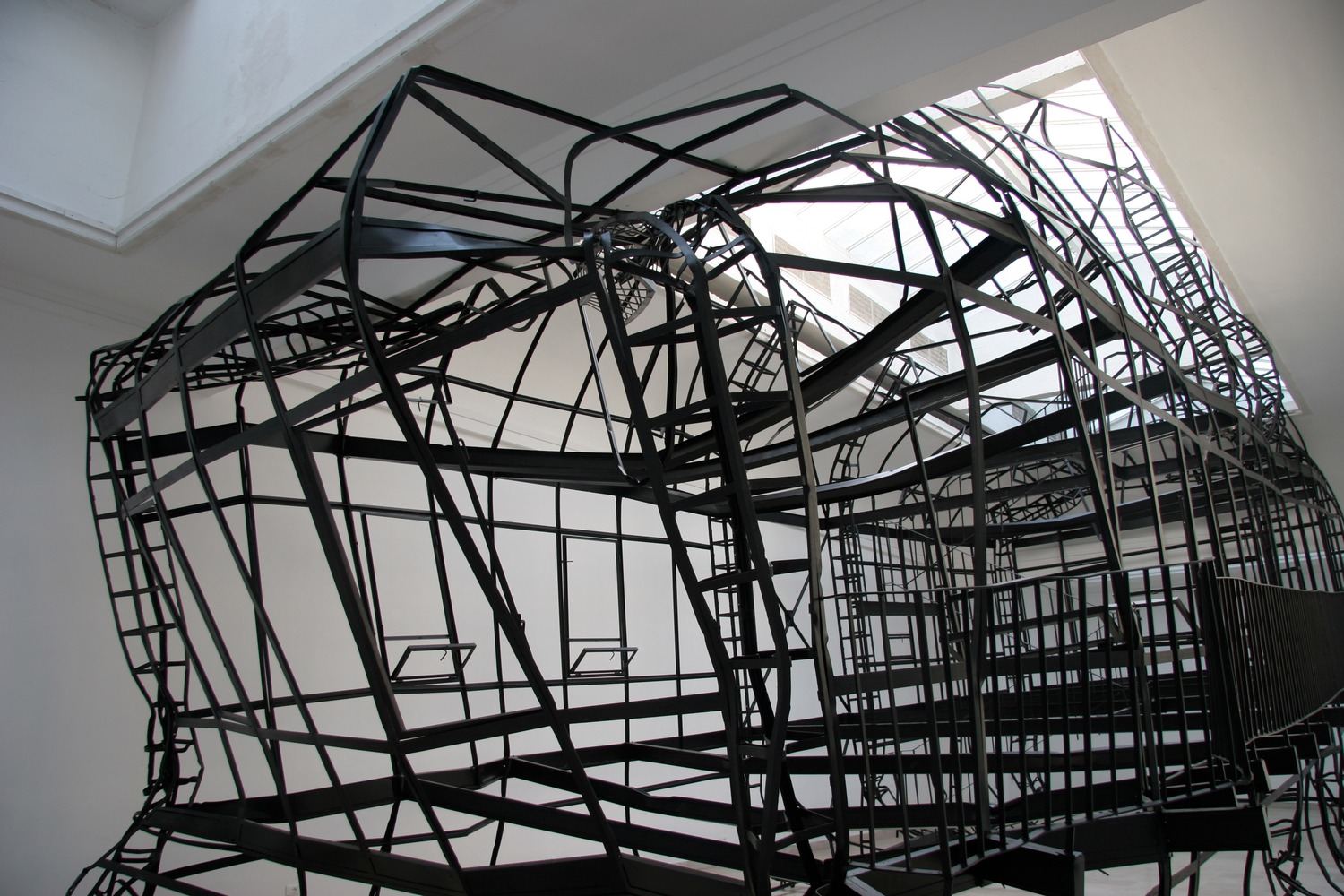 Sosnowska is interested in places encumbered with error, knocked out of functionality, in absurd ideas and absurd implementations. Her works are often peculiar mementos of architectural utopias brought out from the past, inspired by architecture‚s psychedelic properties. The main reference point for Sosnowska are the experiences of post-war modernisation, the all-too-familiar to the inhabitants of Eastern Europe landscape of housing blocks, service pavilions, train stations and shopping centres.

The artist‚s latest project, called 1:1, is the consequence of a reflection on the post-war architectural concepts analysed from the angle of the local, Eastern European, surprisingly vital mutation of the International Movement. During the People‚s Poland era, progress was often restricted to impulsive, rash (and often absurdity-producing) modernisation. The requirement of modernity‚ in post-war Poland was a top-down imposed decision, controlled through a series of orders.

In a number of recent works Monika Sosnowska transgressed the, more or less artificial, border between contemporary art and architecture. In her own words: It seems to me that what I do is somehow in opposition to what architecture stands for. I also think that my art is a completely different discipline, even though I focus on the same problems as architecture does: the forming of space. Utilitarianism is architecture‚s fundamental attribute. My works introduce chaos and uncertainty instead.

Uncertainty is also an irremovable part of the latest project. The additional structure emerging in the Polish Pavilion is almost organic, it parasitises‚ the almost 70 years older exhibition venue. The installation 1:1, like Sosnowska’s other works from the last couple of years, can be viewed as a reference to the practices of the artists of the 1970s (G. Matta-Clark, R. Smithson and others) and a continuation of the reflection on decay and destruction, but also as a criticism of the art institution via a radical intervention in its architectural tissue. After all, the project serves to exhibit‚ the Polish Pavilion itself a building representative of the 1930s, which, as one of the work‚s elements, wrestles‚ with another construction growing out from inside it. Sosnowska’s project fits both the local context and the global discourse on the search for functionality, on moving away from modernism‚s stylisation and pro-community tasks.

Monika Sosnowska was born in 1972 in Ryki, Poland. She studied at the Academy of Fine Arts in Poznan and the Rijksakademie in Amsterdam, and currently she lives and works in Warsaw. Her recent exhibitions include shows at MoMA, New York, Galerie Gisela Capitain, The Kunstmuseum Liechtenstein Vaduz, Freud Museum Vienna, Serpentine Gallery London, De Appel in Amsterdam. Sosnowska participated in Manifesta 4 (Frankfurt), 8th Istanbul Biennale, Venice Biennale 2003.

Polish participation in the 52nd International Art Exhibition is realised with the financial support of the Ministry of Culture of the Republic of Poland. The exhibition in the Polish Pavilon is organised by Zacheta National Gallery of Art.