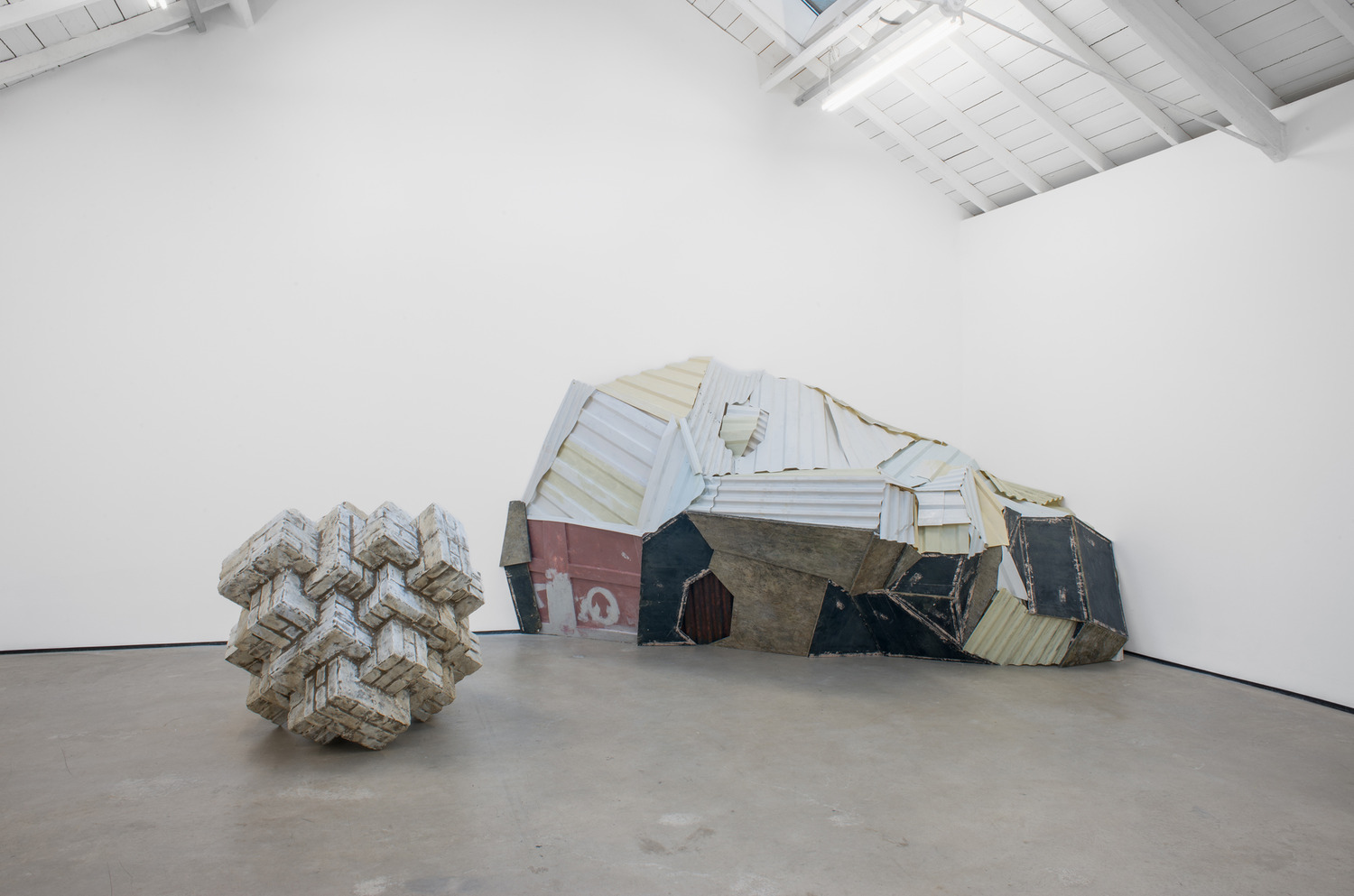 A key element within the practice of Richard Hughes is the notion of time – of time passing – of wasting time – of the effect that time has on a place or an object, how it deteriorates and changes, how it can be transposed elsewhere. His exhibitions posses an ability to create a sense of time-lapse, creating environments that cannot be placed and which become re-structured narratives. Hughes’ work draws from a multitude of references – cultural, social and historical, as well as personal – each reference being filtered through his own immediate experience, as if pulled from the catalogue of things that are around us: TV, music, beliefs, stories, the places we visit on purpose and by accident, aspects of our upbringing, reactions to our circumstances. Appearing as familiar, sometimes everyday objects or structures, these meticulously constructed sculptures are painted casts from polyester resin, they are created replicas of discarded, useless items, which have long passed their best days. Hughes gives them a second life, suspending them at a point of deterioration. Imbued with a morbid humour, his practice also makes reference to Victorian graveyards, memento moris, his own upbringing within urban and suburban locations, such as his hometown of Birmingham, the 1980s and 1990s and their various subcultures. Hughes’ works might be seen as literary – autobiographical assemblages that evoke notions of abandonment and memorial – but which can also create a sense of the enchanted and the sublime.

‘Field Trip’ makes a gradual shift from some of Hughes’ earlier pieces. In response to a larger studio in the countryside of Herefordshire, Hughes’ working methods have become more drawn out, where he progressively assembles and manipulates his sculptures, re-using off cuts and broken sculptures that have been lying about in his studio. The rural surrounding has also had an effect on the immediacy of his source material – feeling more like an observer than a direct participant – Hughes has found himself sub-consciously piling up his ideas and inspirations from trips into the city.

The exhibition itself suggests a dwelling space or a place of shelter – an uninhibited ghostly environment, which makes reference to the rural hippie commune, Drop City in Colorado, USA (1965-73). The counterculture artist community of Drop City had the intention to create a live-in Drop Art, where residents constructed domes and zonohedra using geometric panels from car roofs amongst other salvaged materials.

Within Hughes’ ‘Field Trip’ a variety of pieces coexist. Monumental column sculptures punctuate the space – a wheel stack made from cast skateboard wheels (‘Weekend Widow’); a cast of a broken sculpture creates a plinth on which to display an old Patrick Cox 1990s shoe (‘Man of Mistory’), transposed back in time to somewhere in the Edwardian era. A ghost door (“How We Used To Live”) leans against the wall, covered in the shadow imagery of a teenager’s sticker collection, this links to an earlier piece which Hughes made 11 years ago called “Let’s not and say we did”(2003), a wall painting of the remnants of poster corners and staples, as an impression of what would be left over after a wall of posters had been pulled down. Notions of scale and space are also at play, as giant slabs of cast concrete find themselves lodged into the walls as if flung into the space from above. These cast concrete slabs, entitled ‘Super Yob’ recall a roadside underpass from where Hughes grew up, where passersby’s had wedged objects into the ceiling: bits of glass, bottles and other rubbish hanging precariously above peoples heads. There are works here that suggest anonymous acts of bravado and humour: a tumble dryer is jammed into a basketball ring (‘Hung up on a dream’); a cast hood floats headless, facing the wall (‘Hoods Up’); and two cast bin lid replicas from a cemetery near Hughes’ home read out “NO FLOWERS”/“NO GRASS” – a message for the “hippies (to) go home”.

In the corner of the space a giant polygon face is partially submerged into the gallery’s end wall. Pieced together by a mixture of cast wood panels and cast corrugated steel, the face derives from that of a statue of Gulliver, the centrepiece of the failed ‘Gulliver’s Kingdom’ theme park at the bottom of Mount Fiji, Japan (1997-2001). Hughes’ Gulliver lies horizontally, resembling a fallen monument – his previous life recalling the concept of “the bridge to nowhere” schemes championed in 1990s Japan, and where the old theme park now lies derelict, left to deteriorate. This sense of abandonment transported to the gallery space accentuates the notion that we are occupying a place in the past, an afterlife – a place that could be nowhere or anywhere.

Hughes recently presented work in PALACE PROJECTS, a mobile art project space in Herefordshire. He was selected for the 55th Carnegie International, Carnegie Museum, Pittsburgh (2008); the fourth Liverpool Biennial (2006); and the British Art Show 6 (2005). He was nominated for the Beck’s Futures Award in 2006 and was the recipient of the EAST International Award in 2003.

In 2015, Hughes will be presenting works at Eastside Projects, Birmingham and will be working on an outdoor project at Harewood House, Leeds.