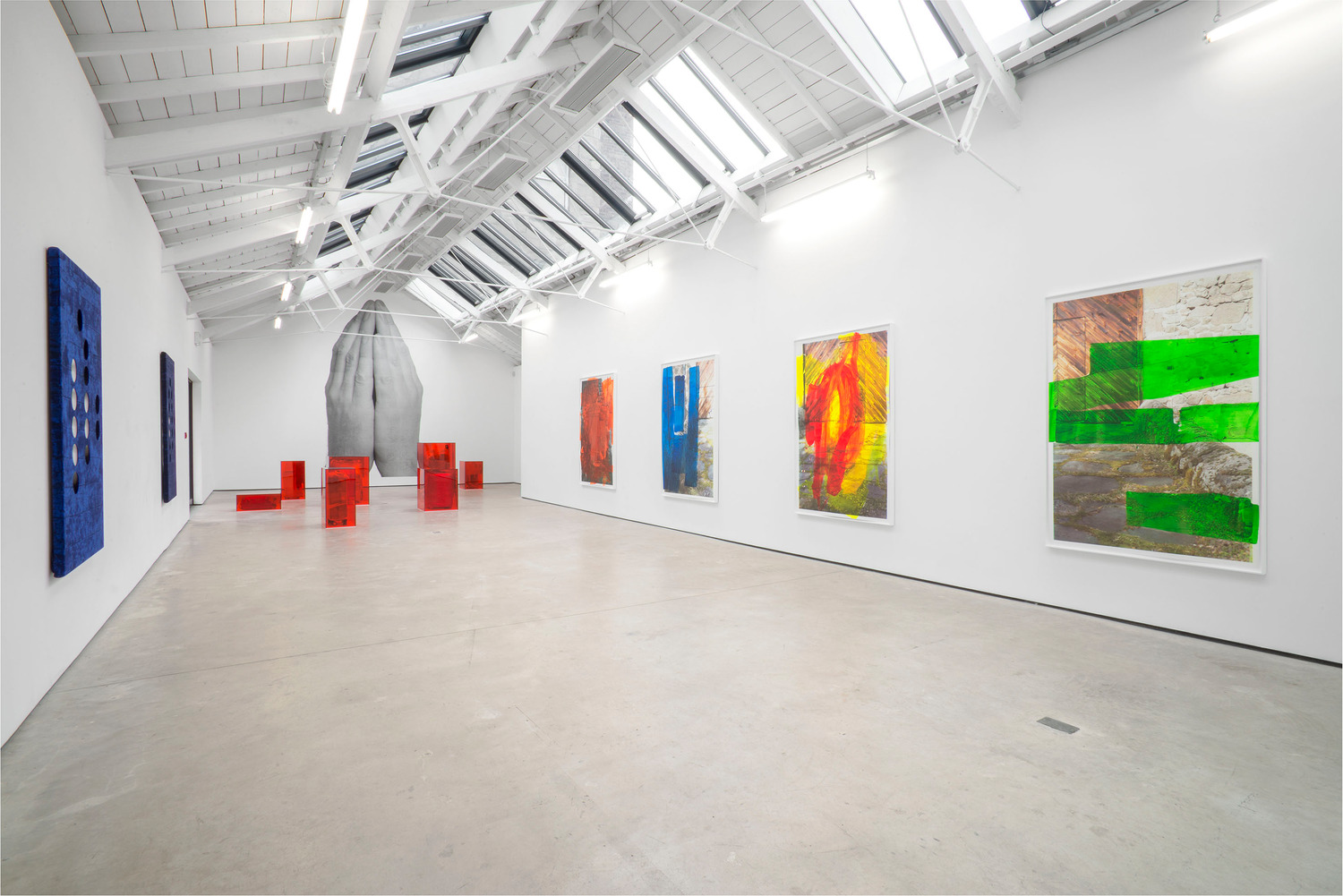 The word ‘mummies’ evokes not only those to whom every human being owes their life, but also, inevitably, the bodies famously preserved in Ancient Egyptian burial chambers. Named after ‘mummia’ – the tar-like substance used in the embalming process, and later prized both as a pigment and as a medicinal ingredient – these latter have often been resurrected in the cultural imaginary as the living dead. As such, they bear an uncanny resemblance to commodities, insofar as both embody the inanimate wrapped up and mysteriously imbued with life. The new works Myles presents in Mummies extend his interest in just such transitions or slippages between raw materials, social and economic uses of objects, and the complex psychologies that attend human relationships (including group and family relationships).

In addressing the processes of exchange and codification that take place in artistic gestures and in everyday transactions alike, Mummies frequently turns to the surfaces of things, to coverings, skins and exteriors. If the nineteenth century invented protective covers or containers for every conceivable thing (including the bourgeois subject, nestled within his shell-like home), the twentieth and twenty-first have favoured plastic, transparent, and skin-like encasements. It is these that feature prominently here, and are exposed and worried at.

This is most apparent in a group of new sculptures, 10 suitcases tightly bound in plastic film by an airport luggage wrapping service and boxed in amber Perspex, which share the exhibition’s title. Their airline tags reveal that they have travelled from Paris to Glasgow. They are certainly objects for transit, but possibly transitional objects too, loaded with subjective investments. Arrested here between arrival and departure – life and death – the Mummies resist easy interpretation or unpacking. Wrapping something (or someone) up might be understood as a quintessentially maternal gesture of care, but wrapping up might also be bringing something to an end, or a setting down of what is sometimes metaphorically termed ‘baggage.’ Wrapping is also a guarantee of freshness, a way of keeping things untainted by the world. Wrappings whisper the promises commodities will supposedly make good on. Myles’s Mummies allow multiple layers of meaning to accumulate around them.

A constellation of other new works accompanies the suitcases. A half-tone print made directly on the gallery wall enlarges the artist’s hands to an architectural scale so that they preside over the tableau of wrapped and encased cases beneath them. His hands make a gesture that could suggest the covering of the face (as if recoiling in shock, or just catching a sneeze), or possibly the joining of hands in prayer, perhaps even a certain reticence on the artist’s part to fully show his hand.

The historical shift from the hand-made to mechanized production is alluded to in three Jacquard wall hangings – another form of covering. The 18th-century invention of ‘programmable’ looms, based on punch cards, was an early step towards computer coding and, not coincidentally, a focal point for acts of refusal of the capitalist mechanization of work. The pattern of these weaves is derived from frottages Myles made of the tiled walls of the building where he has his studio. The completed weaves allude both to a knit program used by the textiles studio in the Scottish Borders to manufacture them, and to the Jacquard punch cards.

The implicit linking of the studio to both domestic space and to the arenas of industry and commerce – the sites through which artist and artwork alike circulate – is seen also in an electroformed copper cast of a veiled sign for the now-defunct Glasgow branch of the retailer Habitat. Its association with aspirational domesticity shades into an intimation of recessionary economics.

In a sequence of prints, abstract gestural painting coexists with the more concrete reality presented in the artist’s photographs of French Situationist Guy Debord’s former home in Champot. These images derive from another of Myles’ current projects, a commission initiated by Foundation Lafayette in Paris, for which he will substitute the wrapping paper used at Galeries Lafayette Maison with 12 images of Debord’s house, printed on Bible paper. Showing the building shuttered and seemingly closed off to the world outside, the photographs turn the place where Debord dwelled, and in which he died, into a kind of involuntary memorial. Myles will put these images into circulation through a gesture of gifting which overlays quotidian purchases made in the store. Here wrapping and shrouding as physical gestures again intimate different senses of life and death. One of consumer capitalism’s most radical critics is subtly made present at the very moment acts of consumption take place, and the artwork – given away as mere wrapping – temporarily defies commodity status.

In this context, Myles’ addition of abstract mark-making resonates both with his own previous varied uses of the technique, and with the splashed and dribbled ink that drifts across the pages of Debord and Asger Jorn’s 1959 book Mémoires. Bound in sandpaper, Memoires defied the proverbial wisdom that a book is not to be judged by its cover. The abrasive gesture made by its covering is certainly to be taken at face value: its intent was plainly to leave a mark on whichever neighbours it might find itself amongst on a library shelf, to scratch any bourgeois coffee table it found itself placed upon. Approaching the way his work rubs up against the world in a mode of negotiation rather than intransigence, Myles finds new ways to make surfaces subversive. Here they signify not so much a refusal of worldly transactions, but rather a sense of how wrapped up in them we are.

Debord chose as the epigraph for Mémoires an excerpt from a letter written by Karl Marx in 1843: “Let the dead bury the dead, and mourn them…. our fate will be to become the first living people to enter the new life.” Myles recovers and gives new life precisely to images and objects that often connote transition, death or loss, and the living dead are not kept under wraps here. Indeed, the spectres of economic crisis, of psychological baggage, of recuperation and recovery, pervade the works that make up Mummies.