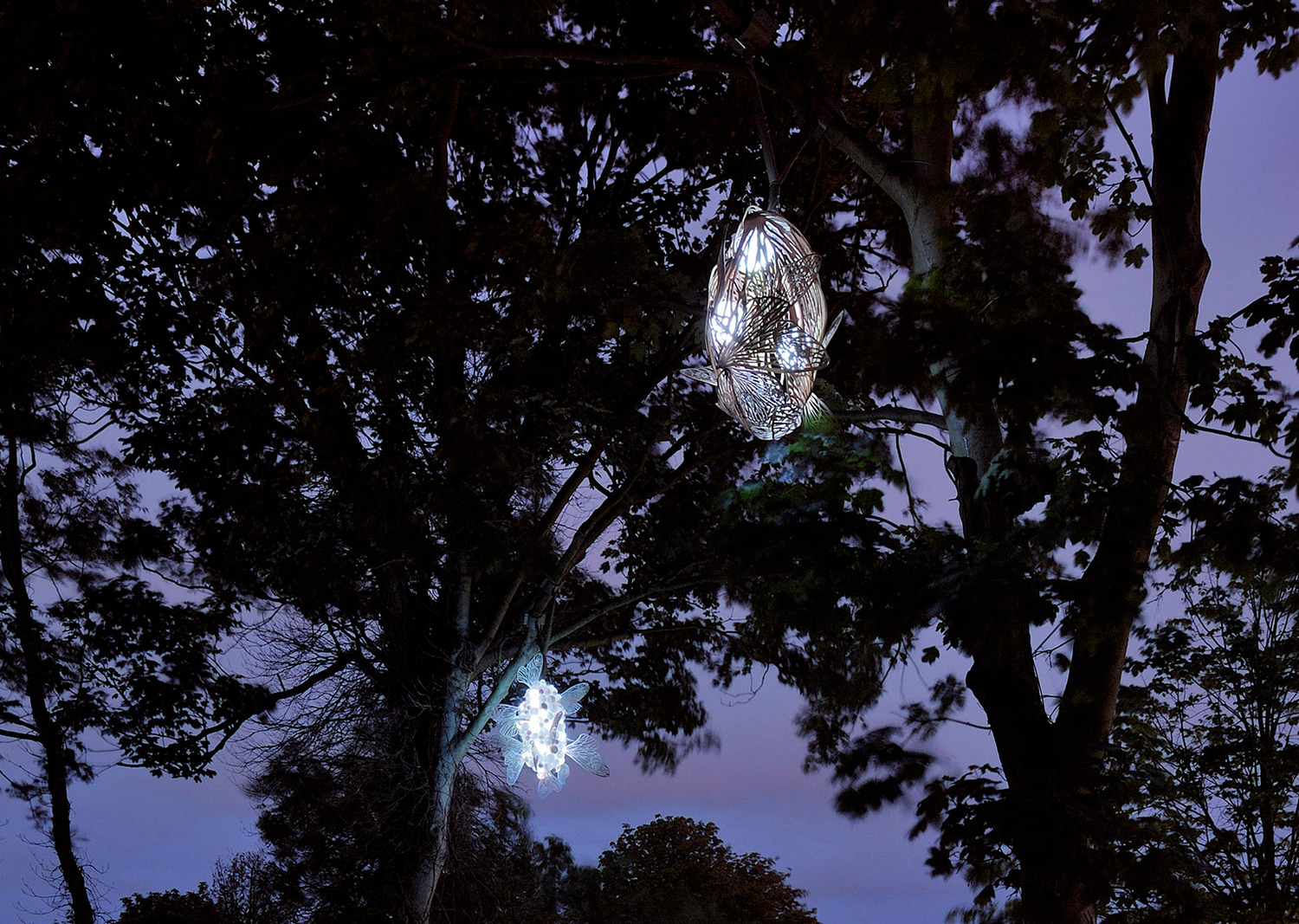 A public commission by artist Simon Periton called Bombyx Mori will be launched at firstsite on Friday 29 June, to co-inside with the late-night opening for the current exhibition News from Nowhere. Bombyx Mori is a four part installation, located outside firstsite’s new building, in the arc of trees surrounding the D-shaped garden and punctuated by the lamppost which has been in-situ since the building opened.

During the gestation of firstsite’s building project, Periton was commissioned to work with light to develop a new installation for the D-shaped garden. These solar powered artworks glow in the dark and create distinct atmospheres during the day and night time hours. Periton researched the garden’s eighteenth-century design in collaboration with the landscape architects, to create planting for the new building. Periton said: “The work is inspired partly by the site; there is a long-established mulberry tree in the gardens of East Hill House opposite firstsite”. The worms of the silk moths that appear in his artworks reference domestic silk production in nineteenth-century Colchester. The artwork is a constellation made up of three lanterns and a lamppost. Cell, Larvae and Cocoon are the names Periton has given to the lanterns, and Polaris is the title of the lamppost. The late-night opening will also feature the launch of a book about the commission, as well as art activities and music at firstsite and the Minories, plus a chance to see the News from Nowhere and Colchester Fine Art Open exhibitions after hours. At firstsite, music will be provided by DJ Rory Crichton starting at 9.15pm accompanied by art activities including the opportunity to have a 5 minute slot alone in the gallery spaces between 10 – 11pm, a quirky opportunity to listen to the film audio from War of the Worlds in the dark of the auditorium and retro space invader games to play. Next door neighbours, the Minories, have also programmed an evening of live art, performance and music starting at 7pm so visitors can enjoy activities at both sites. Live artist John Boursnell starts proceedings at 7.30pm followed by a performance by Clare Iles and Mandy Roberts (who both work at firstsite and the Minories) at 8pm, marking the boundaries and relationships between the Minories and firstsite. Norwich-based synth-folk drone-ballad band Transept will provide live music from 8.30pm.
Our website uses Google Analytics to track visitors anonymously, which helps us improve your experience. You can opt out of tracking at any time via our Privacy page. Otherwise, we’ll assume you’re OK to continue.
I'm fine with this Learn more