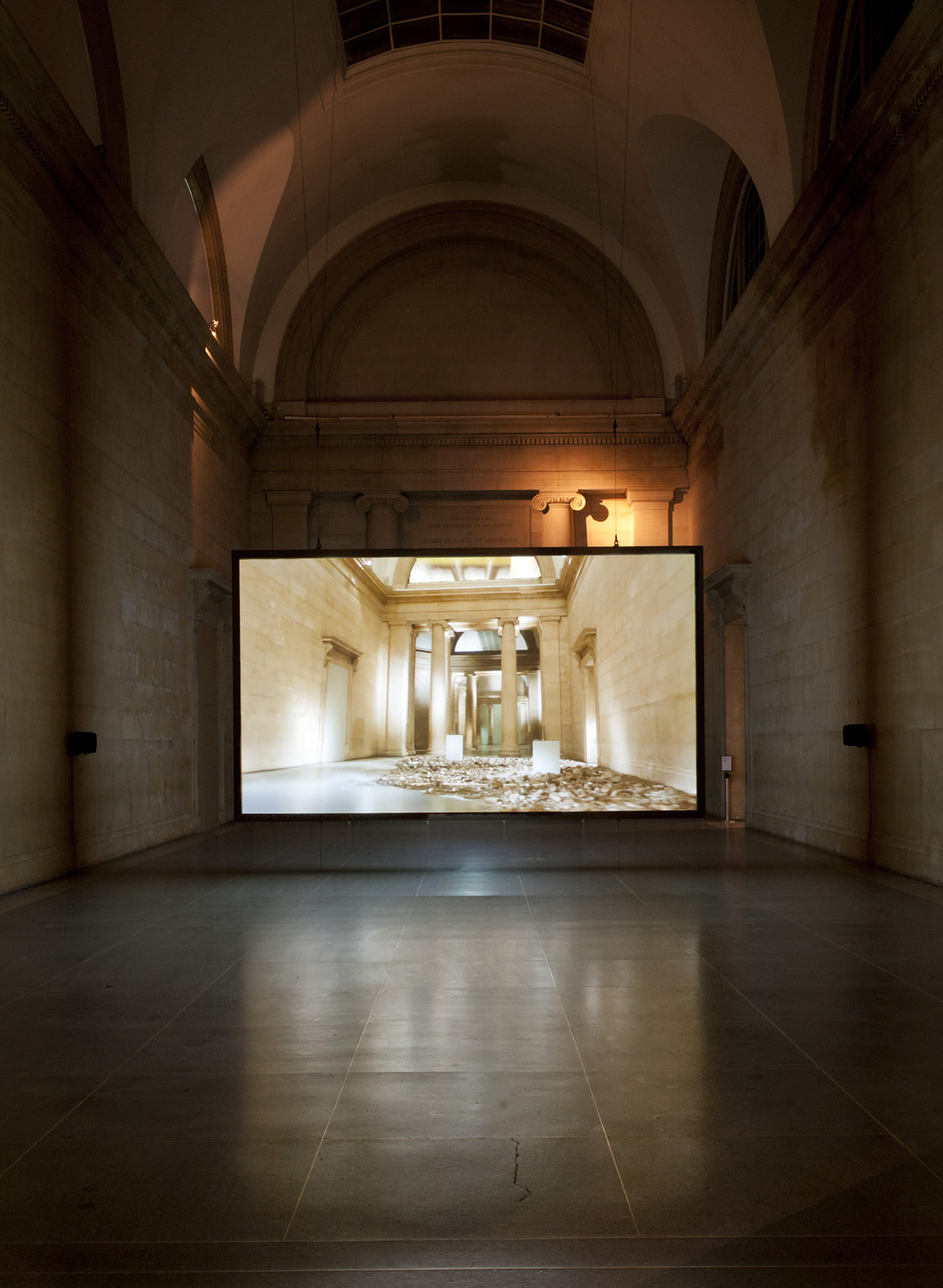 Museums and libraries have become heterotopias in which time never stops building up and topping its own summit, whereas in the seventeenth century, even at the end of the century, museums and libraries were the expression of an individual choice. By contrast, the idea of accumulating everything, of establishing a sort of general archive, the will to enclose in one place all times, all epochs, all forms, all tastes, the idea of constituting a place of all times that is itself outside of time and inaccessible to its ravages, the project of organizing in this way a sort of perpetual and indefinite accumulation of time in an immobile place, this whole idea belongs to our modernity. (Michel Foucault ‘Of Other Spaces’ 1967)

To experience the Duveen Galleries is to experience a series of dislocations. We find ourselves in a street of sorts, an arcade perhaps? The street that we took to get here is now very much elsewhere. Now, within the galleries’ bombastic stone walls, time and space as we understand them are temporarily suspended. For all its stylistic nods to the exterior world, this is an architectural echo chamber, both acoustically and temporally. It’s a space that seems to hold ideas, sounds and memories in perpetual play. Where this outside-in, enveloped facade is punctured – by doorways that lead into light filled galleries – we find no respite. We are thrown around, like the sound of our footsteps, from doorway to doorway, between then and now, between the past and the present: contemporary art to the Pre-Raphaelites, mid-century modernism to neoclassicism, from chiselled stone to moving image. We are bounced from moment to moment along the considerable length of this corridor cum heterotopic highway (to return to Foucault).

We discover a large projection screen on which we find the space redoubled. We are invited on a Phantom Ride courtesy of a disembodied eye, its looping trajectory pulling us up and back, and from side to side, circumscribing the empty space through the repetition of the same movement – there and back, again and again like some perpetually turning hour-glass – and in so doing, cut backwards and forwards through time.

The phantom ride was a genre of film popular in the very early days of cinema. A camera was fixed to a moving vehicle to simulate a journey for an immobile cinema audience. They sat pinned to their seats, white-knuckled for fear they might de-rail on the next precipitous bend. The train tracks or the road anticipated the trajectory of the ‘phantom’ vehicle. Here though, the way has vanished. The highly precise and repeatable movements of the huge robotic arm on the similarly track-bound ‘motion control camera’ used to make this film facilitate a rollercoaster ride on invisible rails. The film’s soundtrack is the only remaining evidence of the camera’s weeklong presence in the Duveens – the audible contractions and expansions, the ascents, descents and contortions, of a very real machine.

Phantom Ride was triggered by the discovery of a momentary rupture to this hermetic place. In 1940 the gallery roof was brought down by a bomb that hit the building and its grounds. We now float weightlessly over the rubble, tracking the shadows of past exhibitions and the ghosts of works seen here before. The motion control camera’s ability to precisely repeat programmed moves time and again, and from place to place, allow this vast and cumbersome machine to function as a miraculous compositing devise – capable of collapsing time and space into a single cinematic sequence – into something approximating ‘real time’. More images of violence and trauma follow: a contorted group of corpses piled up under a table; a Jaguar jet fighter lying belly-up, its mirrored surfaces dematerializing its mechanical menace. The technology of war is pitched against the technology of the digital age – the ancestry of both seemingly interwoven. Four simple mirror cubes fracture the space around them – a quiet refusal – as if aping the three protective wooden boxes for sculptures packed and ready to be shipped to a safe haven in 1939. The sound of urgent footsteps momentarily fills the galleries and then is gone. A machine-gun totting mouse creature guards the entrance to the galleries, monumental in polished bronze, we pass a bricked-up door, then, as if dragging us with it, a tiny paper and balsawood plane flits past, swooping down to land. A prophetic reptilian droid cranes its neck towards our robotic eye – an image of the future, back from the past. Open your mouth, close your eyes.

Turning away, past a now empty South Duveens, the rubble again an afterimage, we find a painting, floating, ghost-like, freed from the provisional shell of flimsy walls and suspended ceilings that for decades obscured the architectural bombast below. Its staccato repetitions like an echoing gunshot from its three iconic cowboys. Are they shooting or dancing? We spin around a dandyish and heavily foreshortened St. George and his vanquished dragon – the medieval sculptor’s perspectival slight of hand that made him plausible in his lofty position, seeming to foreground the digital technology that now facilitates his return.

These few moments from the past recreated here seem to drag others with them. We populate the space with our own experiences and memories. It is suddenly just yesterday as we float past a group of bronzes – a drum, a gun – the instruments of war – the last objects to occupy this space. Then, an image from the day before yesterday, as the absurd calligraphic arabesques of a desert-bound racetrack give way to an aerial dog-fight playing out endlessly above the Hills of Kurdistan. A bomb is caught falling into water, we hit the floor and then rise again into the roof just as the runner returns, powering towards us down the space, then the floor again, the mechanistic mouse, the blocked doorway, the loop…..