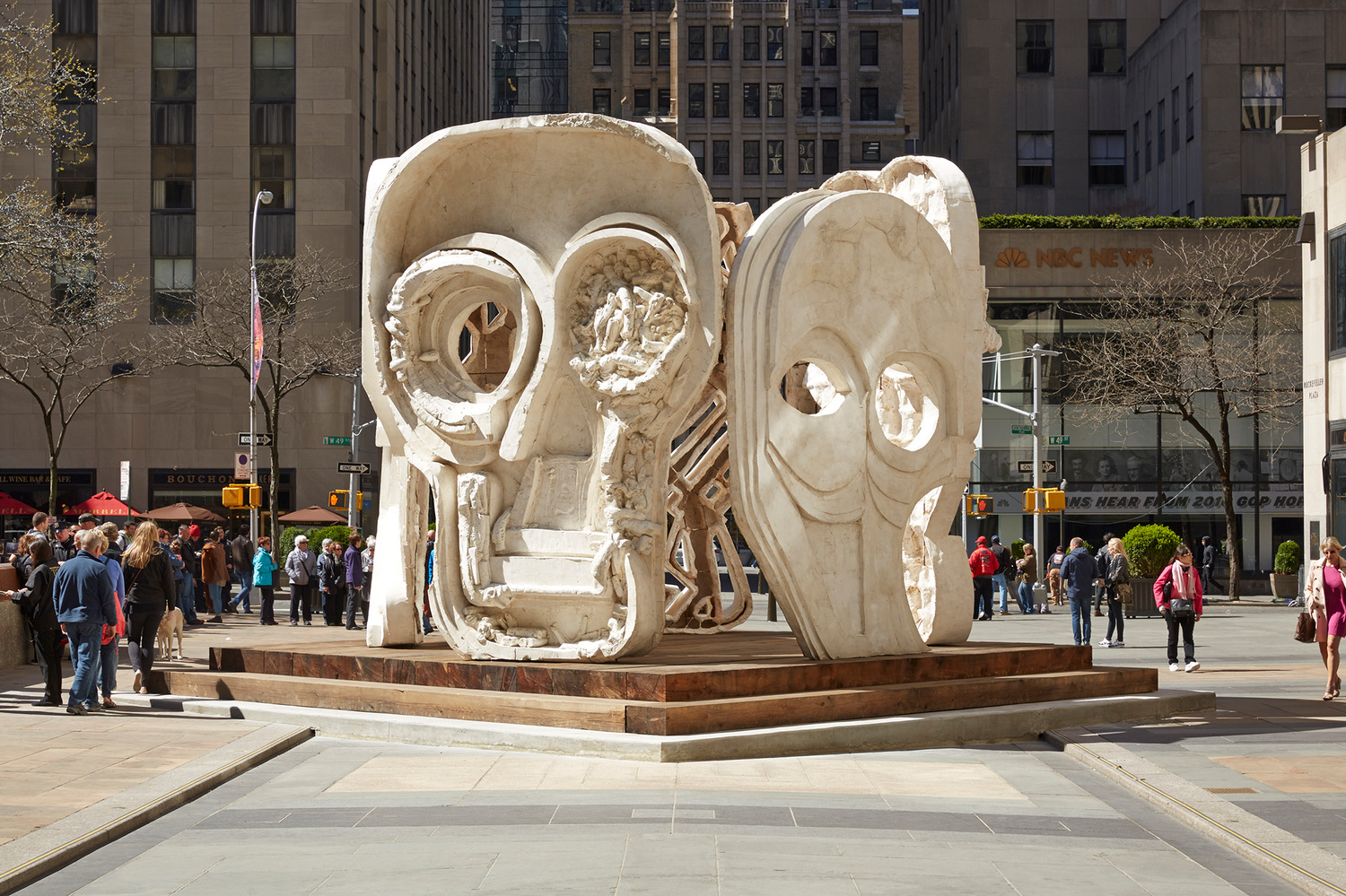 For six weeks this spring, Thomas Houseago’s new commission Masks (Pentagon), featuring five large sculptural masks forming a pentagonal space that visitors may enter, will be on view in Rockefeller Plaza. From within, the mask’s eyes will create windows that frame views of the landscape and skyscrapers of Midtown Manhattan. Thomas Houseago: Masks (Pentagon) will be free to the public and on view April 28 through June 12, 2015 at Rockefeller Center between 49th and 50th Streets. The exhibition is organized by Public Art Fund and Tishman Speyer.

Designed specifically for this plaza, Masks (Pentagon) consists of five masks ranging in height from about 14 ½ to 16 ½ feet, each of which reflects a different approach to the stylized representation of the human face, from clearly recognizable to highly abstracted. Standing vertically with their edges connected at key points, the monumental elements bring Houseago’s striking sculptural language into a dialogue with public space and architectural scale. As each colossal face looks out toward the surrounding cityscape, the spaces between them become “doorways” that give access to an interior “room.”

The five masks, which were cast from clay in industrial-strength synthetic plaster, stand on a stepped base made from massive beams of unfinished redwood. The back of each element of the sculpture reveals the artist’s method of construction – a grid-like armature of rebar inlaid with hemp and plaster. The resulting five-sided form evokes an archaic temple, the ritual function of which has been lost in time.

Houseago creates monumental, often figurative sculptures that combine classical and modernist references and techniques. With a handmade sensibility, he utilizes materials from carved wood, clay, plaster, and bronze to steel rods, concrete, and burlap to create works that intentionally reveal traces of their making. In Masks (Pentagon), planar surfaces like the cheeks or forehead of a face adjoin articulated features like eyebrows or a nose, creating an interplay between flat and three-dimensional elements. The artist’s hand—as well as the footprints of his young daughter—is visible in many of the cast surfaces, while the roughhewn reverse of each face bears metal elements that form connections between the masks. Evoking a visceral response, these abstracted yet iconic faces convey both an elemental sense of power and an open vulnerability.