Thomas Houseago ‘What Went Down’ 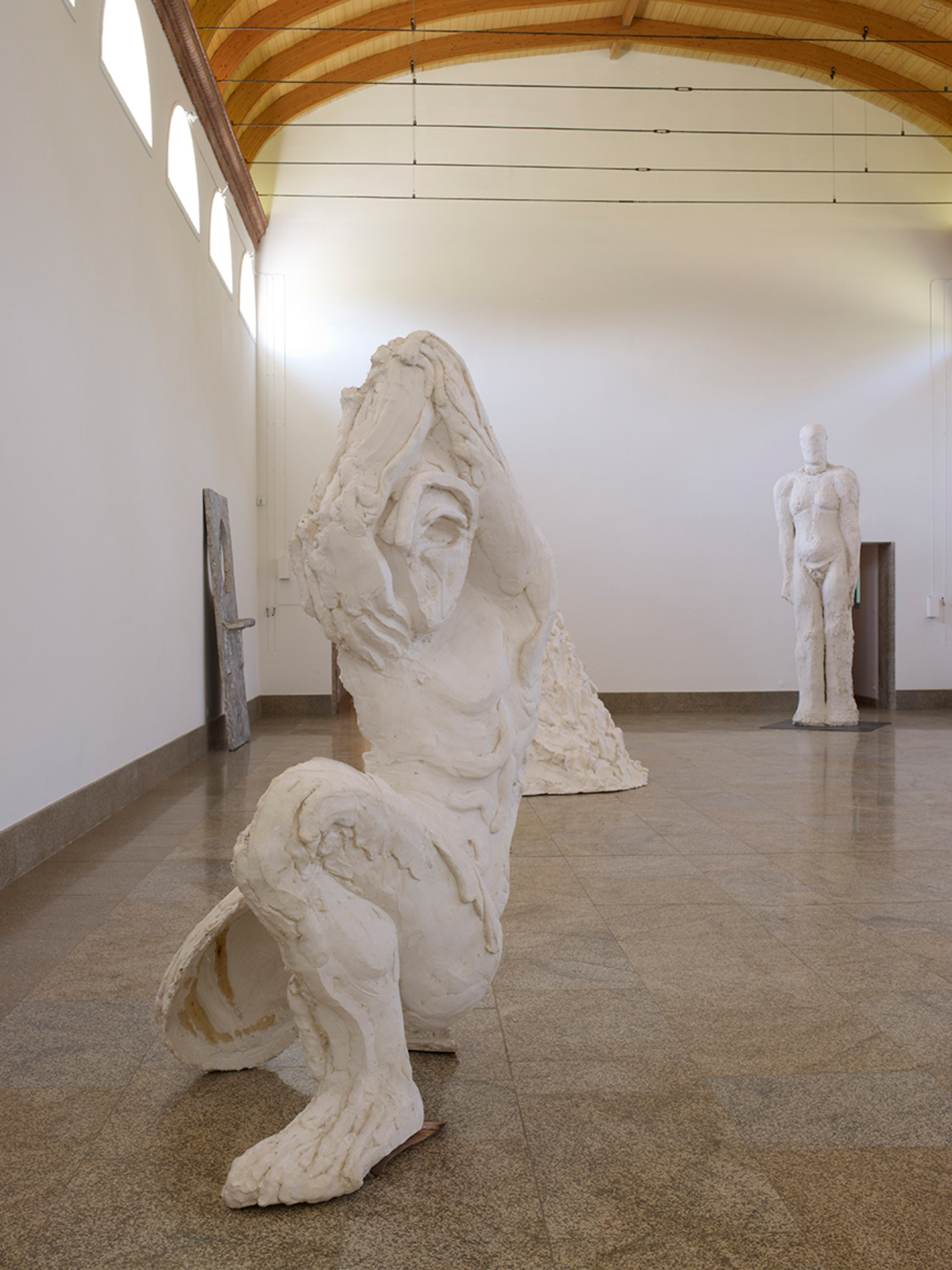 The Centre international d’art et du paysage de l’île de Vassivière is pleased to announce the first solo exhibition in France of the British-born, LA-based artist Thomas Houseago: What Went Down. Under the curatorship of Chiara Parisi, the exhibition will be opened until 23 October 2011.
Thomas Houseago’s monumental and anthropomorphic sculptures have invaded Aldo Rossi’s building and the sculpture’s wood on Vassivière Island. Struck by the landscape, the artist expanded the exhibition space of the Centre d’art towards the usually inaccessible Snake Island. Large Lamp I (2011) rises 4 meters above the ground of the island, and can be admired directly by the lake’s users. According to a local 1950s legend, the island was filled with reptiles which fled the flooding of the Vassivière towns when the artificial lake was formed. This illuminated work converses with the lighthouse on the main island of the Centre d’art where the artist has placed another lighted Large Lamp II (2011), creating a link between the two locations.

On the meadow around the Centre d’art, the body of Lying figure (Mother Father) (2011) recalls a number of Gaugin’s works. It gently rests on its stomach, contemplative despite its missing head. The figure lies on the earth—but also resembles the earth with the rich coal-like materiality of the bronze.

In the sculpture’s wood, Rattlesnake figure (2011) was originally a redwood tree that was carved by the artist and then cast in aluminium. The Rattlesnake Totem is returning to its place of origin in the forest and reflects the nature of the space surrounding it—standing upright and expressing its own fragility, it evokes the title of the exhibition, What Went Down. The artist breathes new life into traditional monumental sculpture by bringing it back to earth and to origin.

Wandering through the works outside the Art Center, the visitor will begin to understand the multiple ideas that Houseago gathers and renders in his sculptures. The works create a new dialogue between contemporary art and its historical basis. He takes visual references from historical sources and translates them to a 21st century perspective, creating a fusion between rock ‘n’ roll, science fiction, and animation. This profusion of references underlines the strong link between post-modern architecture and the artificial landscape of Vassivière. Drawing inspiration from rock music, Japanese animation, and cinema. Houseago deconstructs modern art and fuses it with pop culture, assuring a new elegance in the field of contemporary art.

In the nave of the building, Plaster Gate I (2011), Head (Black Hill I) (2010) and Wood Head (2011) are at once monstrous and vulnerable; aggressive but also protective. Cyclops N°1 (2009) and Pile II (2010), reveal the physical marks of the process that created them: there are visible iron bars, raw edges around the heads, and limbs of plaster. The shapes are both sensuous and roughly constructed as if their maker had been in conflict with them. On the walls, a series of aluminium panels like Door Panel (Holder) (2010) or Tujunga Series (Moon & Pine) (2010) are like a contemporary perspective on Streamline Moderne decors or—why not—the carbonite slabs used in the Star Wars universe to transport “frozen” convicts or motifs from a modern maison cubiste.

Sculpture dramatizes space for Houseago. He stimulates both our sight and memory, transforming his own history and physical experience into an artefact. Sister (1996) is more than three meters high and stands majestically in the nave; its vertical monumentality echoes the sculpture lying outside on the meadow. Sister is one of Houseago’s earliest large-scale works that survived from his work in Belgium in 1996.

The visitor continues the tour of the Centre d’art through the study room, the little theater and the studio–”dream room” that hold the artist’s creative desires. Some of those desires take or will take shape, others will remain as studies/on-going ideas. These rooms allow the visitors to observe the artist’s technique in both sculpture and drawing, but also to identify recurring themes in his work, for instance the human body and especially the hands: Hand/Arm study II (2010)—his main “tool” as a sculptor or the owl: Large Owl (for B) (2011), another totem figure, a variation on the image of the mask and the head. The visitor will also recognize shapes such as the egg or the circle that can be seen in many of his works: Egg I (2011), Sunrise/Sunset (coins) (2010), Coins (stacked) (2010), Museum 2011 (2011), Golden Spoon I (2011).

Aldo Rossi’s architecture at the Art Center made a great impression on Houseago. He conceived What Went Down as a complex portrayal of the past and the future, with visible cracks in the evolution.