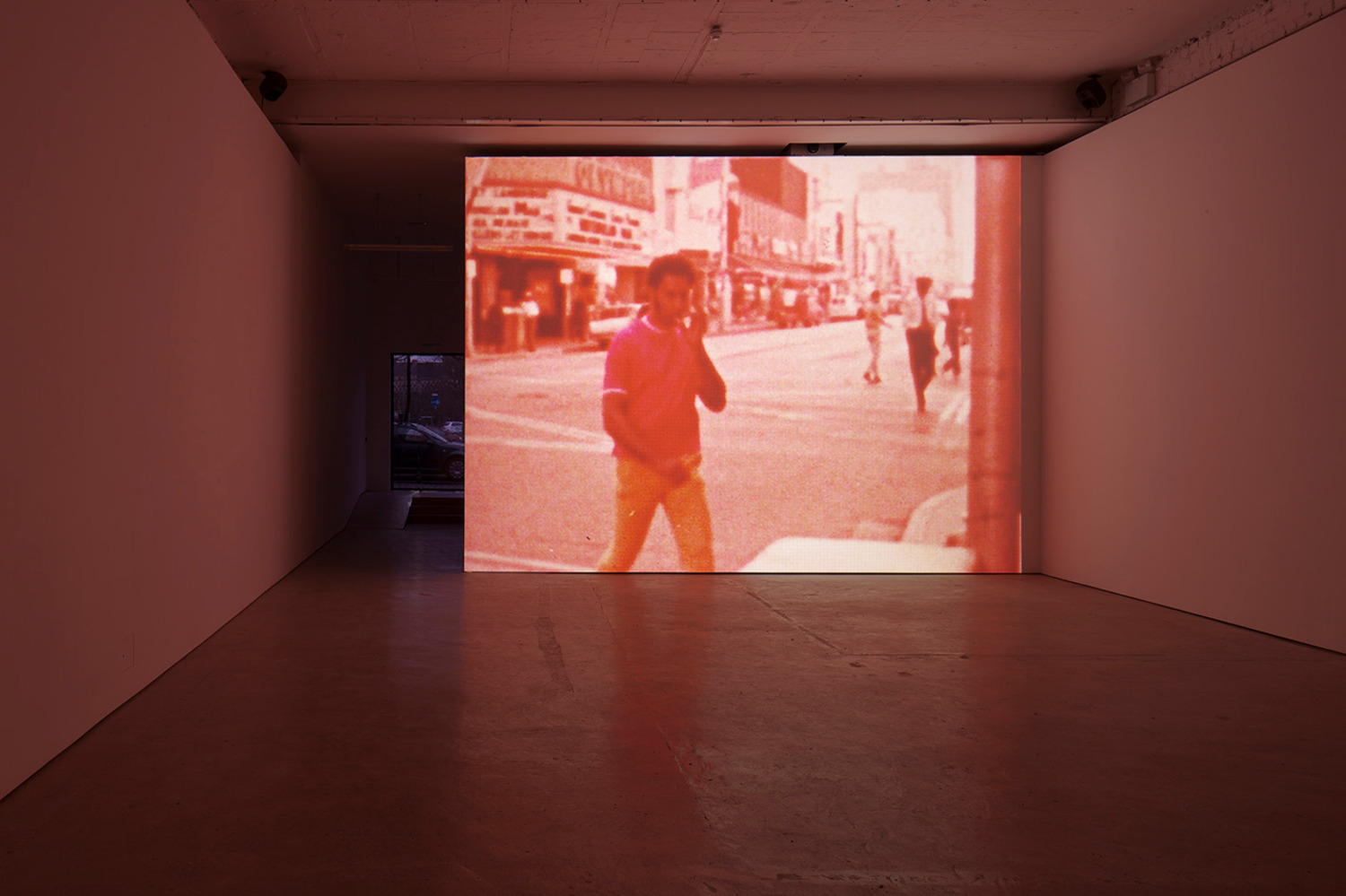 The Modern Institute are delighted to present the first major solo exhibition in the UK of Los Angeles based William E. Jones. The exhibition will open on 23 March and run until 25 May. The preview evening will be held on Friday 22 March from 7pm – 9pm. Jones will be in conversation with Steven Cairns (Associate Curator of Artists Film & Moving Image at ICA, London) on Saturday 23 March, 2pm. Jones is an artist, filmmaker, photographer and writer, whose work centres around the appropriation of documentary and historical research, disseminated through still and moving imagery, sound and text. Working across these mediums Jones’ ambition is to “unsettle or subvert unthinking and habitual ways of seeing”. Having held a strong reputation as a filmmaker, Jones has made a creative shift from producing feature length films, screened in cinemas, towards producing shorter and visually concentrated gallery-based works.

For his exhibition in The Modern Institute’s Aird’s Lane gallery space, Jones will present a film installation incorporating three films screened in succession across three consecutive walls. These works, referred to by Jones as sequences of digital files rather then films, are obliquely autobiographical and call upon moments of political and cultural upheaval in America during Jones’ childhood, and highlight the role of the momentary spectator.

A short text by Steven Cairns has been commissioned on the occasion of Jones’ exhibition:

Power Struggles – viewer, subject, and auteur in the work of William E. Jones

Los Angeles-based artist William E. Jones’ films are woven with autobiographical footnotes and appendages. Reframing archived or found material, he recontextualises and re-aestheticises his subject matter – often unravelling our multi-layered understanding of its social and political genesis, while partnering it with personal and current significances.

Jones’ early work The Fall of Communism as Seen in Gay Pornography (1998) sees footage of young Eastern European men cut from adult videos, shot shortly after the end of the Cold War, and edited into a montage of head-and-shoulders clips that expose their vulnerabilities to the new political system they find themselves in, and more overtly the western cameraman/director and the viewer’s gaze. This power dynamic, between the camera, subject and viewer, is subtly constant in many of Jones’ works and is explored from multiple social and political angles when considering how we reinterpret his chosen material.

For several years Jones compiled DVD compilations of vintage gay pornographic titles and this is where The Fall of Communism as Seen in Gay Pornography and many of his early works are rooted. Taking clips from obscure titles, he reedited them into new sequences, notably Film Montages (For Peter Roehr) (2006) which consists of short video and audio loops – a trance inducing work comparable to, and influenced by German artist Peter Roehr (b.1944, d.1968). Some of these works would later feature in Mid-Century (2012) a compilation marking his 50th birthday.

While these early works deal in both visual and audio edits and juxtapositions, Tearoom (1962/2007) is direct in its social and political commentary, and is an instance of Jones’ hands-off editing. Here, police footage shot on a hidden camera captures men cruising in a public restroom – the footage was later used to prosecute the men. Jones presents the material virtually unedited from its 1962 cut, and this is perhaps the best example of his regard toward the archived material he uses. In this instance the material clearly delivers a political message, and remains relatively untouched by his hand, instead he becomes the custodian of the work’s content – a position often assumed throughout his practice.

“You are the camera” asserts the narrator in Jones’ recent work Shoot Don’t Shoot (2012), in which he takes outdated police training footage used to educate police officers on when to ‘shoot’ and rearranges its order, interspersing frames of flickering reds and pinks. “You know him to be 6 feet tall … 200lbs … a black man wearing a pinkish shirt and yellow pants … he is known to be armed and dangerous” calls the male voice, as he addresses the viewer. The footages reddish hues are the result of the film stock’s degradation and in this state Jones suggests the transfer of power from the police officer, to the viewer, for whom the original footage was never intended – an opportunity to evaluate the officer’s official role, as well as the viewer’s own. Here, two scenarios are played out, but edited together by Jones to feature the armed and unarmed assailant simultaneously; furthering the double meaning alluded to in the works cinematic title.

Bay of Pigs (2012) sees black and white footage from the failed US invasion of Cuba in 1961, taken from the Cuban documentary Girón (1974) mirrored along a horizontal line that divides the works frame equally into two halves, one section then mirrored left to right to create a kaleidoscopic effect. Although Jones was born one year after the attack (b.1962, Ohio) the political implications of the event would be felt throughout the early part of his adult life. The films disorientating soundtrack is taken from a numbers radio station, which broadcast coded messages in numerical strings – adding to the confusion, these stations are yet to be officially acknowledged politically. Taking cuts from the Cuban film (which mixes documentary with reconstructions, and has an inherently Cuban perspective) Jones puts emphasis on the disorientating nature of war, for those involved in combat and those deciphering its meaning at home.

With similar political references, Actual T. V. Picture (2013) combines footage of US aerial bombings during the Vietnam War with clips of transistors, originally designed for military use and quickly adopted as a component in the domestic television set. The Mobius links that bind the aerial attack, the television set with news broadcasts capturing the war are woven together in Jones’ edits, which is at times is stroboscopic, enabling the viewer to see images of both subjects near simultaneously. For Jones the Vietnam War (1959-1975) was ever present on his television set, and the impact of the resulting social and political conflicts it brought about are still relevant today, impacting on his practice and making the subtleties of the work all the more poignant.

While Bay of Pigs and Actual T. V. Picture offer veiled biographical references to Jones’ childhood, they acutely articulate the complex relationship he has to his material and chosen subject matter, extending his visually seductive imagery in a lineage that plots new biographical markers. Twined with the immersive nature of film and video, Jones invites the viewer to share his often internal dialogues.

His work has been featured in international solo presentations and exhibitions including those at: Institute of Contemporary Arts and Tate Modern, London; Austrian Film Museum, Vienna; Museum of Modern Art and Anthology Film Archives, New York; Wexner Center for the Arts, Ohio; and Walker Art Center, Minneapolis. He has participated in international film festivals in Vienna, Istanbul, Oberhausen, Barcelona and Sydney, and numerous group exhibitions including those at: Palais de Tokyo, Paris; CCA Wattis Institute for Contemporary Arts, San Francisco; MOCA, Los Angeles; and Carnegie Museum, Pittsburgh. Jones has exhibited in the 12th Istanbul Biennale; the 53rd Venice Biennale; and twice at the Whitney Biennale, New York.

Jones has produced several books including: Inside the White Cube (2012); “Killed”: Rejected Images of the Farm Security Administration (2010); and Is It Really So Strange? (2006). His writings can be found at: http://amberwavesofbrain.blogspot.co.uk.

Steven Cairns is Associate Curator of Artists’ Film and Moving Image at the Institute of Contemporary Arts, London. He recently coordinated the LUX/ICA Biennial of Moving Images 2012, curated Alma Mater (2011/12) a LUX annual touring programme of recent Moving Image from the UK and has contributed to numerous screening programmes and panel discussions. He is also a regular contributor to Artforum and Frieze among other publications.