Arrange Whatever Pieces Come Your Way 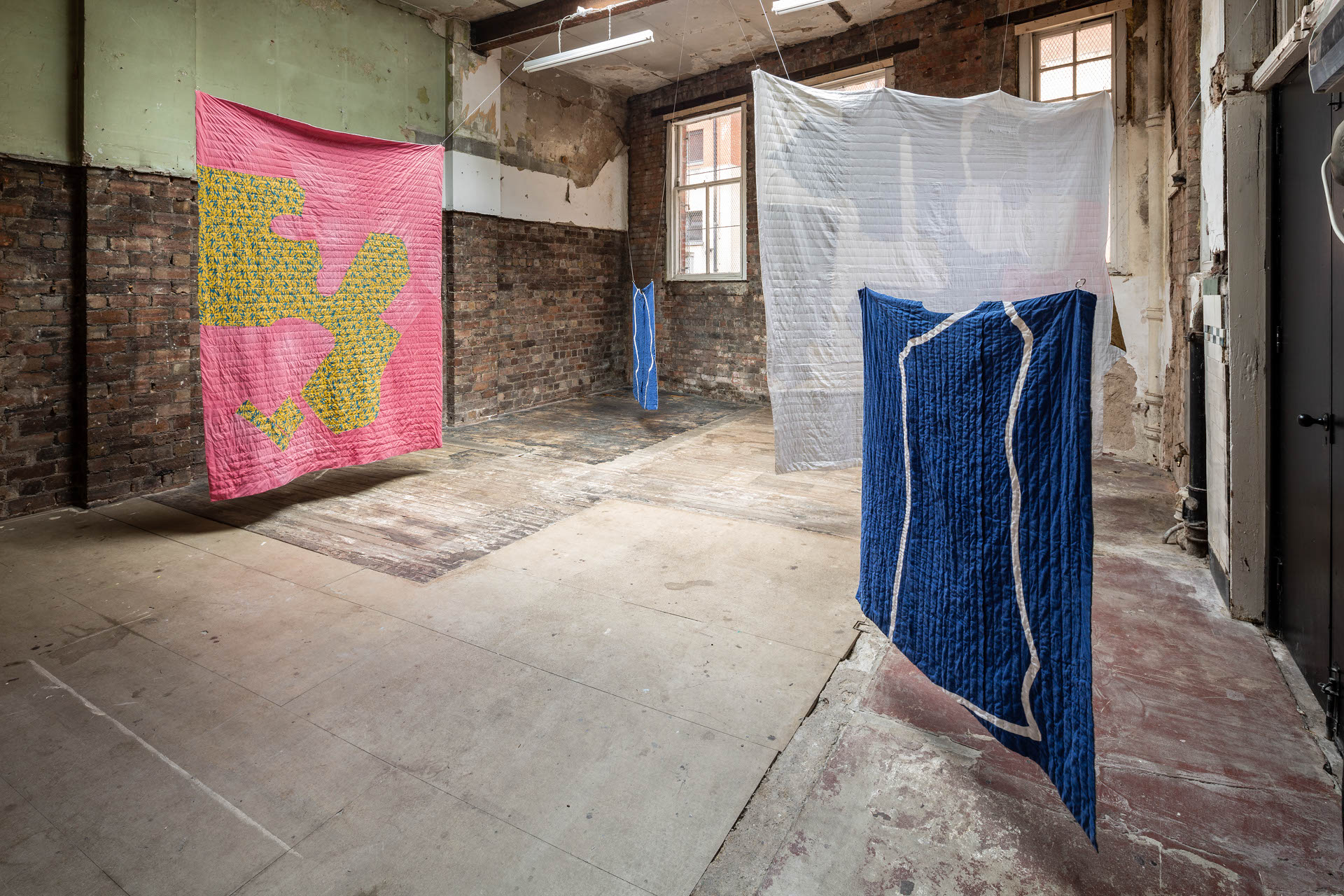 Arrange Whatever Pieces Come Your Way are a partnership between Sheelagh Boyce and Annabelle Harty, which celebrates their shared interest in architecture through the creation of handsewn quilts and reconstructed fabric works. Working with friends used clothing and drawing inspiration from iconic buildings, AWPCYW transform worn fabrics into physical forms that address and command space.

Quilt 37 and Quilt 38 are both constructed from the front and back of an Issey Miyake plantation dress, using the pattern of the clothing as the shape of the quilts. Drawing from neolithic architecture, the outline of two of the standing stones from Avebury’s stone circle is traced onto the blue fabric. These tokens of energy led AWPCYW to explore the architecture and significance of power stations. Reflecting on their interest in structures that are now demolished or were never constructed; the back of Quilt 37 portrays the building and chimney of Inverkip power station. The waist of the cooling tower at Pinkston, is depicted on the back of Quilt 38. The colours and tones of the fabrics reference the natural material and landscape of the stone circle.

Quilt 39 is an unpicked Nathalie du Pasquier shirt, combined with 3 pairs of gym shorts on the reverse. This is the first time AWPCYW have incorporated a patterned fabric, focusing on the quality and consistency of the print in contrast to the pink backing, tonally displaying the wear and use of the material. The geometry of the dissected shorts on the reverse focus on the space around the squares and the central line that connects the three garments.

Quilt 40 emphases the negative space, an exercise which has been executed in 2 previous quilts. Using workers jackets, unpicking the robes to see the visible sleeves, pockets etc, AWPCYW uses the colours, browns, oranges, blacks and whites to balance the space between each pattern. The back is constructed from Annabelle Harty’s father, Brian Henderson, nightshirts which are intricately pieced together, with a black dome at the bottom, a homage to the power station, Sizewell B, which Henderson designed.

These intimate stories are made tangible by meticulously abstracting and restructuring fabrics worn and loved by family and friends, the quilts are material tales narrating architectural structures and their historical sentiment to fabrics and their owners. Taking hundreds of hours to produce, each quilt is unique, and highlights the intimacy and craft of handsewn objects.

Sheelagh Boyce lives and works in Glasgow. She studied Education and taught in Primary Schools in Glasgow for 20 years. She lived in Berlin from 2005 – 2007. Boyce began quilting in 2013 and establishing Arrange Whatever Pieces Come Your Way with Annabelle Harty in 2016.

Annabelle Harty lives and works in London and Wiltshire. Having lived in Havana, Cuba for a year she moved to Glasgow to study Architecture at the Mackintosh. In her year out Harty worked for Martorell, Bohigas and Mackay in Barcelona on the Olympic Village, before returning to complete her Diploma in Florence and Glasgow. After graduating, she worked for Benson + Forsyth on the Museum of Scotland project in Edinburgh. She established Harty and Harty Architects in 1997 with Stephen Harty.