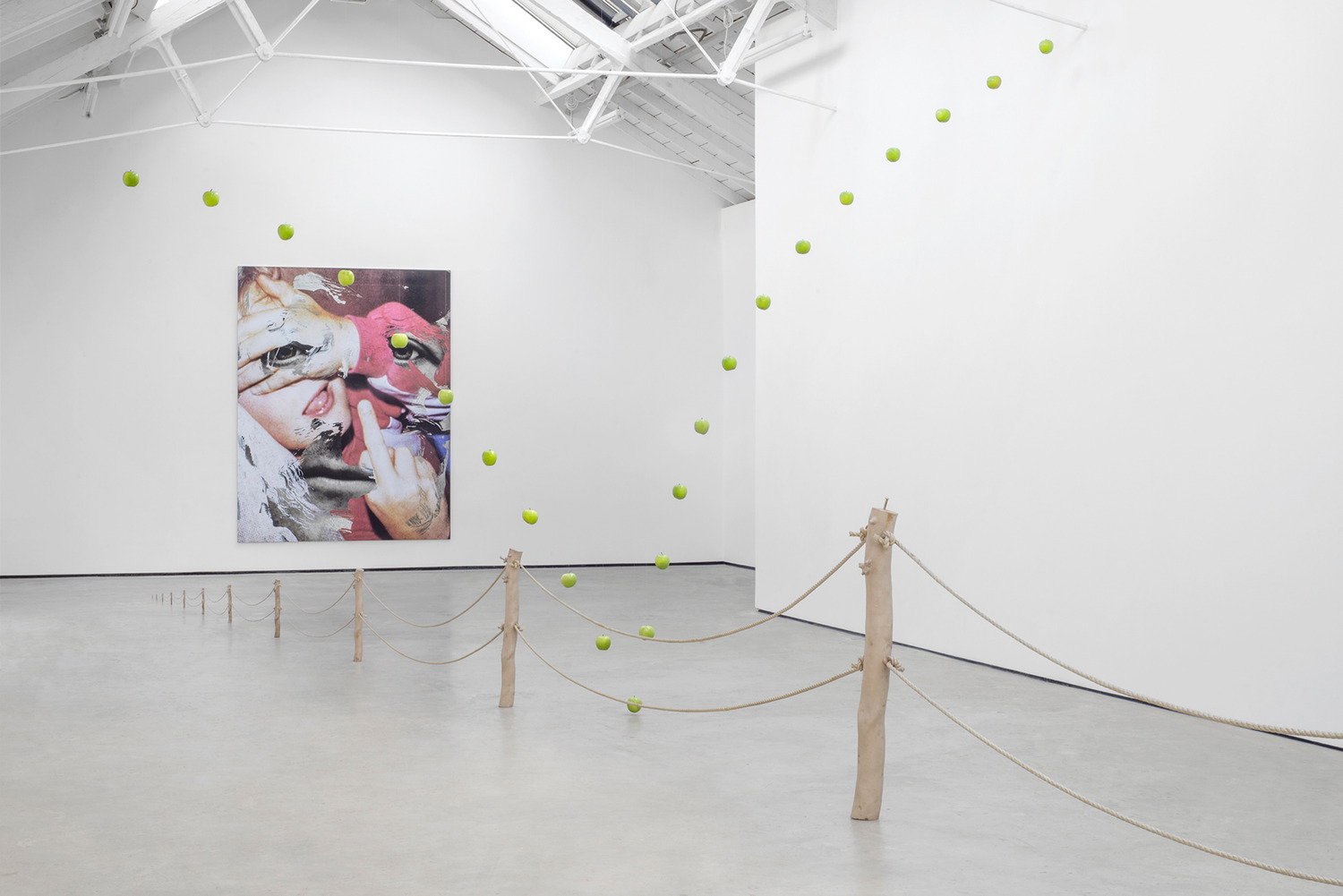 Through an exploration and extension of the possibilities of sculpture, painting and image production, Fischer’s practice grapples with notions of space and scale; interior and exterior; representation and reality. His work is characterised by an interminable diversity of materials, strategies, concepts, and images – drawn from everyday life. Fischer’s twist on ‘the real’ resonates with art historical movements such as Pop, Dada and Surrealism, all of which similarly toyed with the found image and the everyday object, to create new and unanticipated combinations, shifts of scale, and a sometimes ferocious collision of visual information.

For The Modern Institute, Fischer has produced a new sculptural piece which bisects the interior of the gallery space. Taking the form of a rope fence with wooden posts, typical of fences used outside to designate walkways and porch areas, Fischer’s sculptural representation is a cast bronze replica, which is exposed to slowly patina over time. Destablising the viewer’s sense of familiarity to the object, Fischer has manipulated its scale, starting at 125% life-size, the fence gradually decreases along its 15-metre length to a minute size of a few millimeters. This dramatic shift in scale represents a potential infinity; it is a variable that grows arbitrarily large or small, towards infinity. The shifting scale, play on perspective and finish makes Fischer’s cast fence jarringly distinct from that in the exterior world – an uncanny, destructed version of an existing object – while simultaneously, its exposure to accumulated changes in surface, texture and colour from its natural patination allow it to draw parallels with the real object in the outside environment. Further developing this line of enquiry, several green apples are suspended from the ceiling in the formation an imaginary, oversized ‘line of action’, as if tracing the movement of a ball, frozen mid-bounce. Turning the outside in – or the inside out, the organic objects appear cartoon like within the installation, emblematic of the fairytale-style surrealism that pervades Fischer’s practice. These works exemplify Fischer’s use of ordinary and simple forms to visualise the idea of simultaneity – two parallel types of experience, the before and after, the internal and external. Through this notion of simultaneity and the use of bravado, this piece invites comparisons with other earlier works, such as the expansive installation Horses Dream of Horses (2004) and subsequent pieces Vintage Violence (2004–05) and Melodrama (2013), which incorporate thousands of oversized, falling raindrops, suspended at varying lengths from the ceiling to create a singular overarching statement.

For the exhibition, Fischer has produced three new large-scale prints of identical size. Opposed to the shifts in scale within the other works, these serve to create a dichotomy of the finite and infinite. Hanging at opposite ends of the gallery space are two collaged images of the artist superimposed over one another amongst a scheme of digitally rendered paintwork – the older, murkier, slightly pixelated photograph of Fischer as a child almost completely envelopes the black and white headshot taken in the present day. Seeming to be identical, at closer inspection the digital and mechanical sleights of hand show the imperfections integral to the screenprinting process. The third, singular piece uses the same headshot of Fischer but appears to be overlaid by thick, abstract paintwork, streaking across the canvas in vivid spatters and squeegeestyle sweeps, partially obscuring the underlying imagery. The abstract overlay in this piece is in itself however a photographic illusion. The surface of the work has the pristine finish of a screenprint rather than the thick impasto relief we might expect when viewing at a distance: gestural abstraction has been supplanted by a gestureless simulacrum. Fischer in this way compels us to view these ‘paintings’ from a remove.

The process of obstruction within the three print works, recalls Fischer’s separate series titled Problem Paintings, which consists of classic movie star headshots (mainly photographic images from the golden era), overlaid abruptly by another, often jolting image (such as, a hovering slice of lemon, a bent screw or a half-burned cigarette). As with a defaced picture or painted-over billboard, only fragmentary glimpses of the underlying images remain. The space and depth of the finished piece is integral to the effect of the work, and the layering of the real and representational harks back to the street and the routine experience of object and image overlapping – the endless collage of things that surround us.

“It is possible to think about Fischer’s production in relation to types of space, both real and imagined, from which the work may have emerged or with which it may be closely associated. Three overlapping spheres can be defined: the studio, the exterior or public space of image and objects, and the realm of fantasy or the fictional. It is these three zones, or the treatment of something from one realm in the manner of another, that creates a liminal quality in Fischer’s work, where things, images, and materials seem not to behave as we might expect them to.”

– Jessica Morgan, ‘Inside, Outside, and Out There’, in Urs Fischer, Exhibition Catalogue, MOCA Los Angeles, 2013