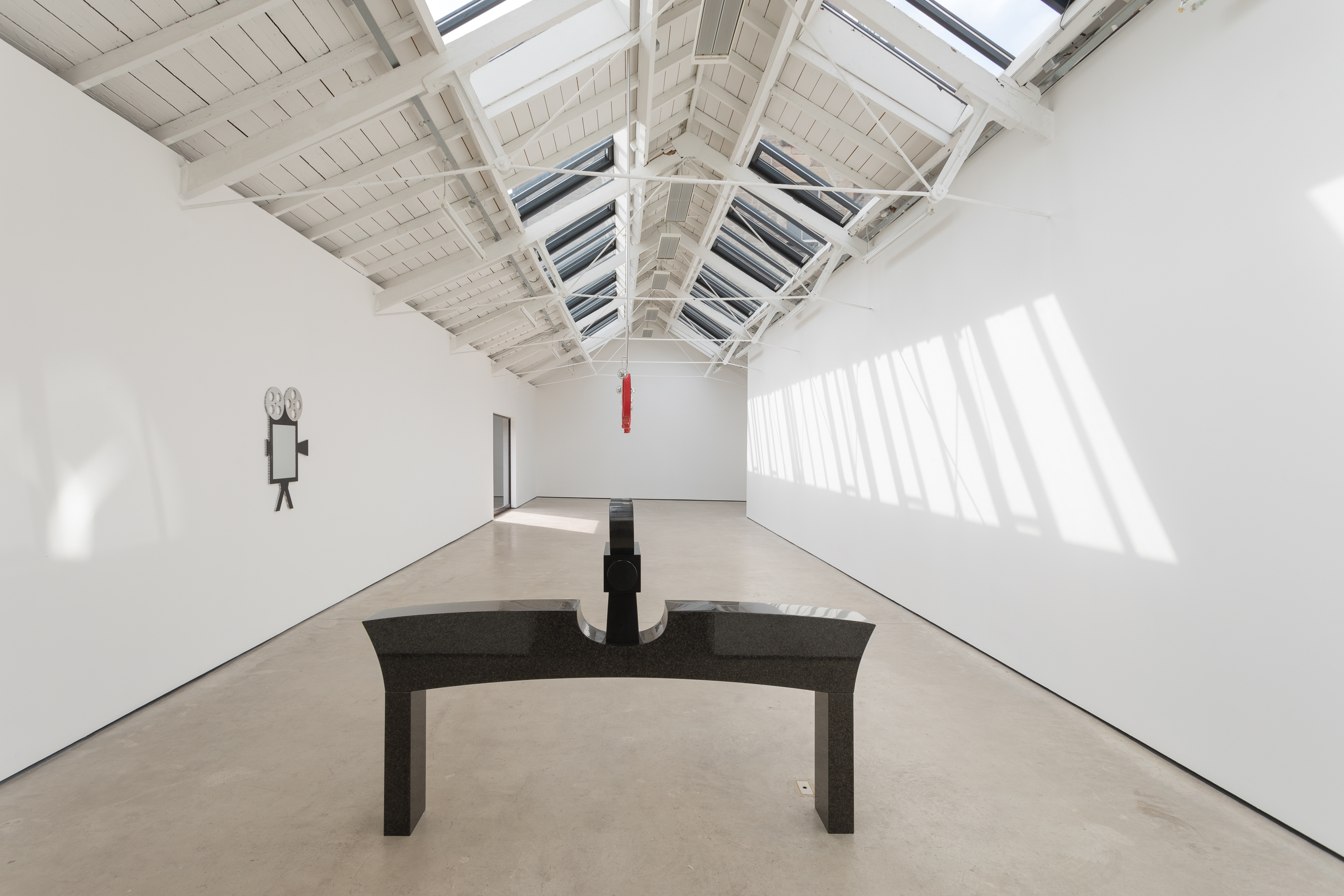 Andrew J. Greene’s exhibition Hope at The Modern Institute Osborne Street, presents a group of sculptures that reshape and recontextualize quotidian elements and artifacts to create disjunctive effects. Seizing on forms encountered by chance or drawn from the material culture of antique Americana, Greene stages an interplay of specificity and generality, the familiar and the strange. Evacuated tokens of pleasure or power are deployed in an investigation of the functions of ideology, taste, and meaning making in the realm of objecthood.


An illuminated, spinning, sign that displays “yes” on one side and “no” on the other side1 is affixed to the facade of the Osborne Street gallery.

Ten used toy vending machines2 are installed in the corridor beside the entrance of the gallery. Each vending machine displays a different collection of antique items.

A polished, black, granite sculpture depicting an antique film camera sits near the entrance of the gallery and points inward.3

A 48-foot-long aluminium railing is suspended from the ceiling in the centre of the gallery. The railing consists of (six) 8-foot sections, each of which is engraved with two phrases,4 one on each side. A doubled series of red, cardboard numbers, one to nine with zero at the end, hang from the railing.5 Small desktop fans are assimilated into the architecture of the railing and animate the numbers.

A mirror made to look like an antique film camera6 is centred on the back wall.

A motorised, life-size, swan decoy7 is mounted to the wall in the back corner of the gallery.

1 The sign enlarges an “executive” decision making coin that was gifted to Greene’s father at some point in the 1980’s.2 A once-ubiquitous feature of the American commercial landscape, toy vending machines were found outside of supermarkets and restaurants.
2 They were designed to appeal to children with bright colors and dispensed little tchotchkes and toys in plastic capsules.
3 The sculpture is a 1:1 translation of a portion of a headstone in Hollywood Forever Cemetery in Los Angeles, CA.
4 The phrases are appropriated from storefront signage, book titles, and radio advertisements.
5 Jack’s Candy, a wholesale candy outlet in downtown Los Angeles displays numbered piñatas along a tensioned cable near the entrance of the store causing them to occasionally sway in the breeze.
6 The mirror is a 1:1 translation of an existing mirror in the men’s bathroom of a Casablanca themed restaurant in Venice, CA.
7 A swan decoy is used to scare away smaller fowl and prevent them from nesting on private property.