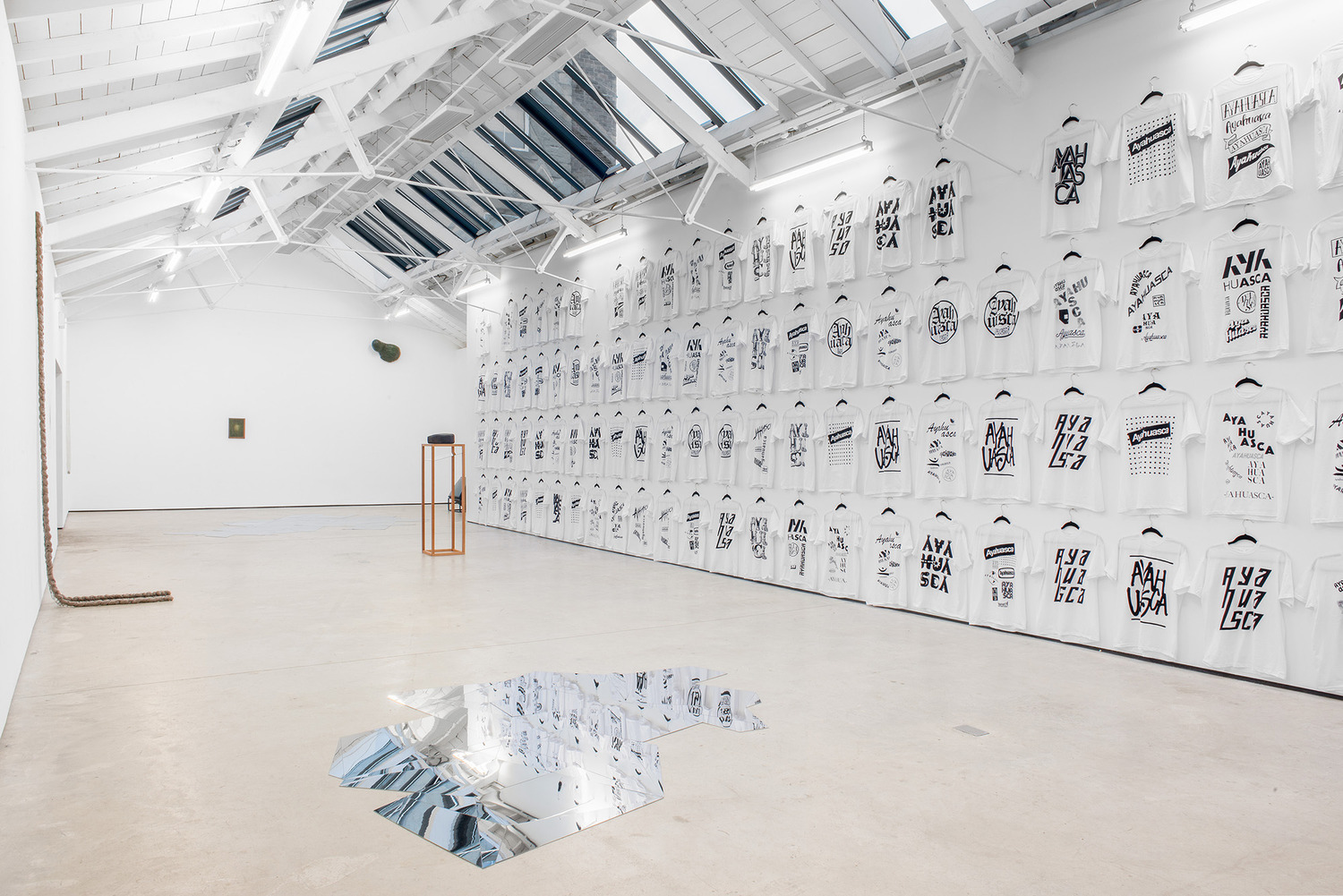 Kiti Ka’aeté is the second part of an exchange between The Modern Institute and Mendes Wood DM which began in April this year. The exhibition gathers 9 artists from Brazil, Mexico and Spain, and the works included span 40 years of artistic practice from Ana Bella Geiger’s 1974 video performance to Adriano Costa’s site-specific Ayahuasca installation, conceived in Glasgow. The loose, conceptual matrix underlying the exhibition is contained within its title – Ka’até is the Tupi-Guarani word for the deep forest, which is far away from the territory of men, unbroken by paths or inroads – it is the mythical place where gods and spirits live. To the indigenous tribes of Brazil, the Ka’aeté is the deep jungle, a place without history or concept where things are not fixed to form and where animals can metamorphose. Kiti means to cut with a sharp instrument, and implies the advent of technology. As a paradigm, it suggests the tension between eden and civilization, between the fluidity of the pre-conceptual mind and the rigidity of modernity; above all, it speaks of the problem of how to represent the mystery of nature, when we ourselves are part of the mystery we are trying to solve.

Lucas Arruda’s small and rigorous landscape paintings are the result of an abstract quest to create a detailed serialisation of all the possible circumstances of light. Painted from his imagination, they are as virtual as Mangrane_’s floor mirrors – and nearly as schematic – were it not for their intense air of psychological intimacy or personality. Arruda’s catalogue of landscapes is closer to a continuity of mental states expressed at the juncture of the deeply personal and the abstract. In difference to the mythological breadth of the other works included in the exhibition, Arruda’s two small paintings trace a path of the utmost subtlety from the universal and towards the individual.

Paloma Bosque’s restrained but highly emotive sculptures exist like material markers of time, punctuating the open space of the exhibition. Deceptively simple, their formal resolution is the result of a rigorous distillation and an overbearing concern with composition and equilibrium. Bosque_’s practice develops out of an investigation of materiality, structure and physicality in different media. Her sculptures are an outcome of the direct process of interacting with matter and researching its physical and symbolic relationships with space and the viewer.

With LEARN TO PRAY GUARANI & KAIOWA for the world doesn’t to finish, Paulo Nazareth participates in and films a night of prayer in the forests of Mato Grosso do Sul, where a small group of landless Guarani-Kaiowá people currently reside. According to a long-standing tradition, the tribe gathers regularly at nightfall to sing until sunrise in devotion to the divinity Ñande Ru, a primordial creative principle which sustains the balance of all things. The song, once begun, cannot be interrupted and its sound is considered to be sacred and energising. The video is significantly dark, image-less – giving privilege to the idea of intangible and invisible cultural expression. It speaks poignantly to the fragility of ancestral transmission, while at the same time affirming the cultural currency of the sacred in contemporary art discourse.

In Ayahuasca, an installation specifically conceived for this exhibition, Adriano Costa makes a humorous play on the commodification and distortion of indigenous cultural meaning. Ayahuasca, a hallucinogenic decoction of ritual and sacred value to various native people in the Amazon, has become popularised as a pseudo-spiritual, recreational drug. Costa’s grid of generic, white cotton t-shirts heaving under a variety of fonts and paginations, engenders the vertigo of a cheap souvenir shop. Characteristic of his work, the t-shirts can be placed and replaced at random to suggest a dynamic, ludic (and despairing) availability of entrances and exits: the expanding possibilities of the disposable, consumable, portable and new.

In a similar, if perhaps more scientific, examination of the transposition and decontextualisation of cultural meaning, Mariana Castillo Deball traces the history of Alfred Maudslay, a British explorer who travelled extensively in the Maya region in Mexico and Guatemala between 1880-1920. Maudslay played a crucial role in the understanding of Mayan hieroglyphic writing and in recording the monument’s inscriptions with drawings, photographs and plaster casts. The stone on view is a replica of a Mayan original used by Maudslay, and stands as a vacant image of attenuated source material, drawn through a series of scientific methodologies. Castillo Deball is interested in the trajectory of these objects, which depart from a direct contact with the original monuments and end up as negatives, positives, photographs and drawings.

Situated at the exhibition’s entrance, Ana Bella Geiger’s 1974 performance video Centroterminal is from a period of radical experimentation in her career which spanned the early 1970’s, problematising ideas of agency, limitation, and the impossibility of centrality in a universe of centres. Using only the surface of the earth itself as a medium, the performance suggests Geiger’s dual spiritual and political relationship with nature and a frenzied excitement with the open-ended nature of creative action.

Celso Renato was a significant, yet idiosyncratic contributor to the Brazilian Neo-concrete movement which called for greater poetic feeling in concrete art . His delicate, prismatic paintings on wood and architectural salvage in the 70’s and 80’s represent a union between the formalist concerns of concrete art and a poetic engagement with the material world around us. The work on view in the exhibition is from the last year of his life and is strongly representative of his practice of harmonising composition and found objects.

Solange Pessoa has worked primarily as a sculptor and painter over the last three decades. Her range of materials, include: earth, blood, hair, clay, bronze and natural pigments, come out of a sustained interest in the primordial in artistic practice. She often remarks that the first material of human manufacture in pre-history was a bonding agent of bone and clay, and similarly all of her works are issued from a world of limited material choices, with a formalisation indicative of ritual or use-value. Another facet to the work is Pessoa’s strong physical identification with her practice, her treatment of objects as an iteration or an extension of her own body, distorted and reconfigured. In the exhibition, her two bronzes occur like fruits, flesh or mineral accretions near the ceiling.

Daniel Steegmann Mangrane’s work often speaks to the extreme aesthetic rigor, both latent and manifest in natural expression -his floor mirror fractals suggest his interest in the encounter between conceptualised or constructed geometries and natural patterning. The meticulous geometrical construction in mirrored plates suggests a virtual grid, or an atomic structure that involves and underlays all visual phenomena – problematising the idea of an artist’s agency as individual or as an extension of a natural project.