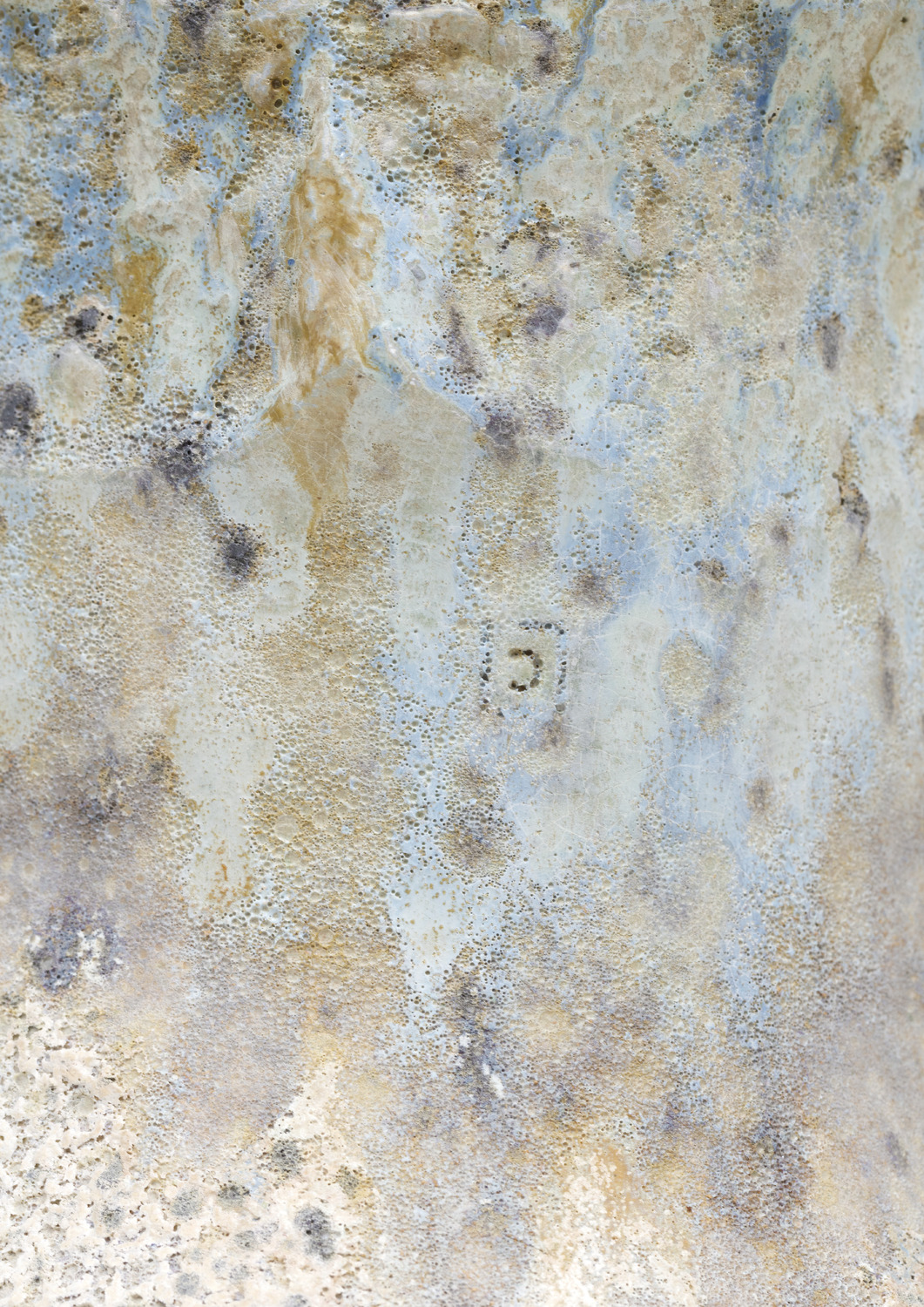 ‘Alas! why does man boast of sensibilities superior to those apparent in the brute; it only renders them more necessary beings.’
– Frankenstein, Mary Shelley

Presenting throughout the entirety of The Modern Institute’s Aird’s Lane is Liz Larner’s new sculptural exhibition. Expanding on her ceramic works, Larner is surveying clay as a medium, and brings together navigations of geological structures as well as highlighting the parallels in creation, science, and revulsion.

The title of the exhibition and artwork “____” references how Frankenstein’s Monster is titled in the first theatre production of Mary Shelley’s Frankenstein in 1823. This use of the grammatical symbol alludes to something bigger than a nameless invention; it leaves space for the relationship between evolution, idea, and discomfiture that is yet to be understood.

In the main space of Aird’s Lane Larner exhibits her oval-shaped wall- works. The cracks and the disruptions in the ceramics are all made by the kiln. Larner accepts change and distortion in the firing process, embracing and working from the forms and uses the segments to emphasise their fissures. ‘Better for the loss’ takes the shape of the broken-off part from the left side and repeats the ripple outline throughout the work, it is overlapped, noting the geological process of subduction where tectonic plates converge. ‘More than nothing left behind’ uses kintsugi, (a Japanese technique for mending the areas of breakage with golden lacquer) elevating the kiln’s coincidences. The sculptures, which embody both anthropomorphic and geometric forms, have a visual density that contradicts their scale.

Two Asteroid works sit within the Bricks space. These free-standing ceramics capture earthy clay and minerals from which they illuminate the heavenly properties of asteroids. This series formalises the known and unknown bodies moving in our solar system and the possibility of impact. ‘Nyx’ is described as a Goddess, originally born from chaos and her name means ‘the mother night’. As a creator goddess, she laid a silver egg that produces the gods responsible for the creation of the world. Larner reproduced this beginning, glazing in white gold and noting asteroids and motherhood in the texture and drippings on the surface. ‘Siren’ another of the dark Goddesses, are figures with enticing voices resembling birds, fish and women. Larner has transformed this representation into an object expressive of a piece of the sky that asks us to ponder our connection and disconnection to the unknown. Larner is investigating the relationship and reaction to the obscurity and the horror in the unfamiliar.

Liz Larner (b. 1960) received her BFA from the California Institute of the Arts in 1985. She lives and works in Los Angeles. Larner’s work recently was the subject of a solo museum exhibition at Sculpture Center in New York in January 2022 and Walker Art Center, Minneapolis in April 2022. A solo presentation of her work opened at Kunsthalle Zurich in summer 2022. Previous solo and two-person museum exhibitions include Aspen Art Museum (2016); Art Institute of Chicago (2015); Two or Three or Something: Maria Lassnig, Liz Larner, Kunsthaus Graz, Austria (2006); Museum of Contemporary Art, Los Angeles (2001); I Thought I Saw a Pussycat, MAK—Museum of Applied Arts, Vienna (1998); and Kunsthalle Basel (1997).