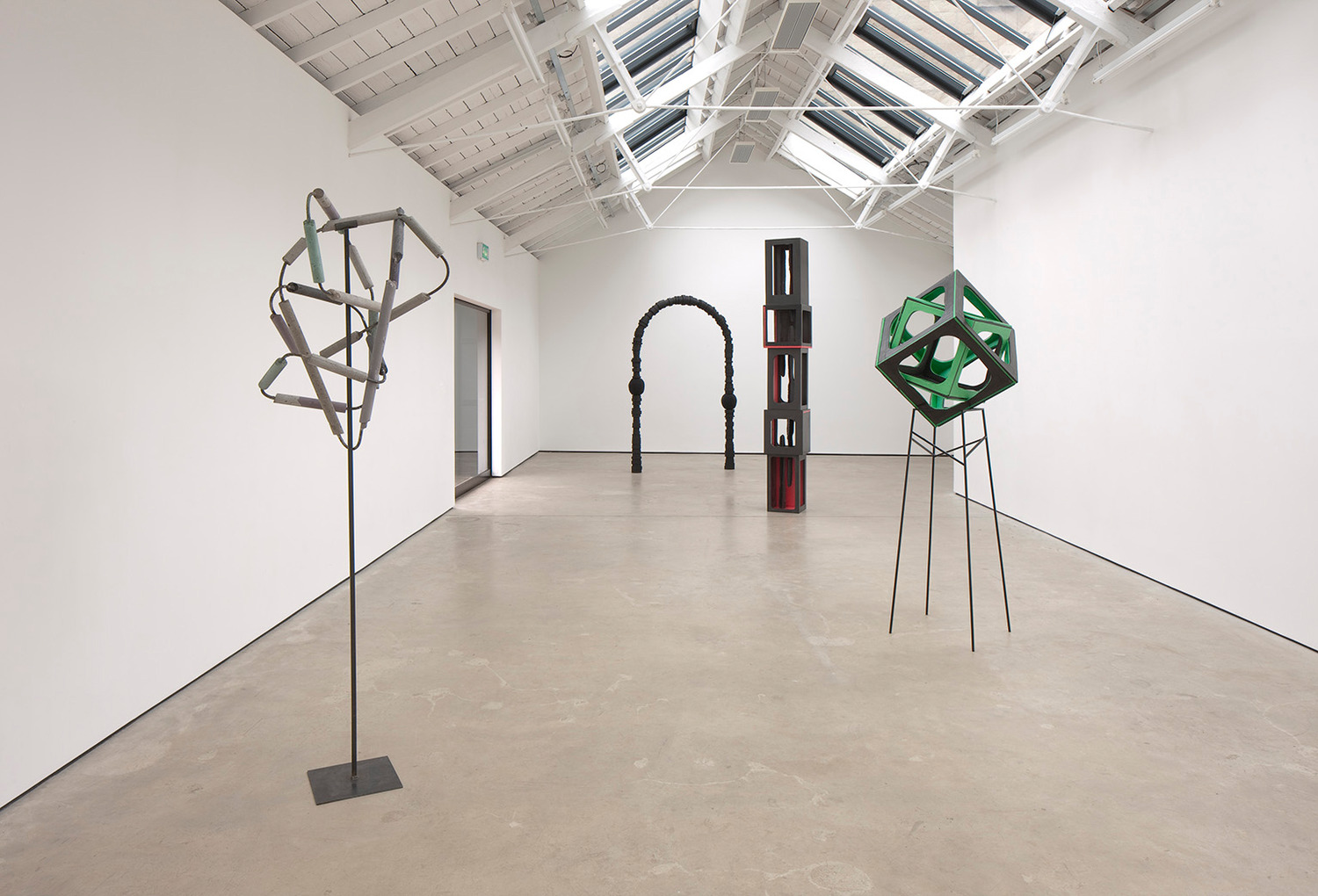 The Modern Institute is pleased to announce a solo exhibition by Eva Rothschild. Predominantly incorporating cast objects, the works exhibited include a number of motifs common in Rothschild’s work, such as beading, geometric shapes supported on metal stands and columns aswell as the use of a particular colour spectrum. Brought together the installed works are in direct dialogue with the volumes of the gallery space.

Exhibited works include Felix, an afghan rug coated in resin, its wool fringes still visible. The new work, Romans is a freestanding arch, constructed from rolls of various tape cast in jesmonite with two beaded heads. Lasso, resembles a coiled rope hung on the wall, and is hooped in green, red and black. Tombstones, a tower of jesmonite pyramidal casts, are balanced end to end, with coloured felt in between each volume, and The Lady Vanishes is a pillar of cast cubes containing cast cactus.

Creating works in the tradition of minimalism, Rothschild adds and then pares back references to culture, history and symbol, to build ‘complex webs of precedents and associations’ in which we all share and recognise, but that can also be odd and disconcerting. Her works balance, stack, wrap and knot, materials around geometric shapes and structures, and occasionally include recognisable motifs. Rothschild has described her quest for ‘intrinsic rightness’ and ‘presence’ equally when making works and exhibitions of works; balancing shapes and materials within sculptures, and sculptures within architectural space and volume. Simon Wallis, Director of The Hepworth Wakefield has written – “Interlocking, stacked and floating forms create a magician’s sense of theatre, or evoke a game whose rules we don’t yet understand, as if we were children once again.”

Solo exhibitions include Hot Touch, the inaugural exhibition at The Hepworth Wakefield (2011) and Kunstverein Hannover, Hannover (2011 – 2012); South London Gallery, London (2007); and Kunsthalle Zurich, Zürich (2004). In 2010 the Public Art Fund, New York presented Rothschild’s work Empire at Doris C. Freedman Plaza, Central Park, New York and in 2009 she was invited to make a Duveens Commission at Tate Britain, London (Cold Corners). Group exhibitions include Unmonumental: The Object in the 21st Century, New Museum, New York (2007) and Half Square, Half Crazy, Villa Arson, Nice, 2007. Her work is included in the collections of Carnegie Museum of Art, Pittsburgh; Irish Museum of Modern Art, Dublin; and Tate, London. Born in 1972 in Dublin, Rothschild now lives and works in London.