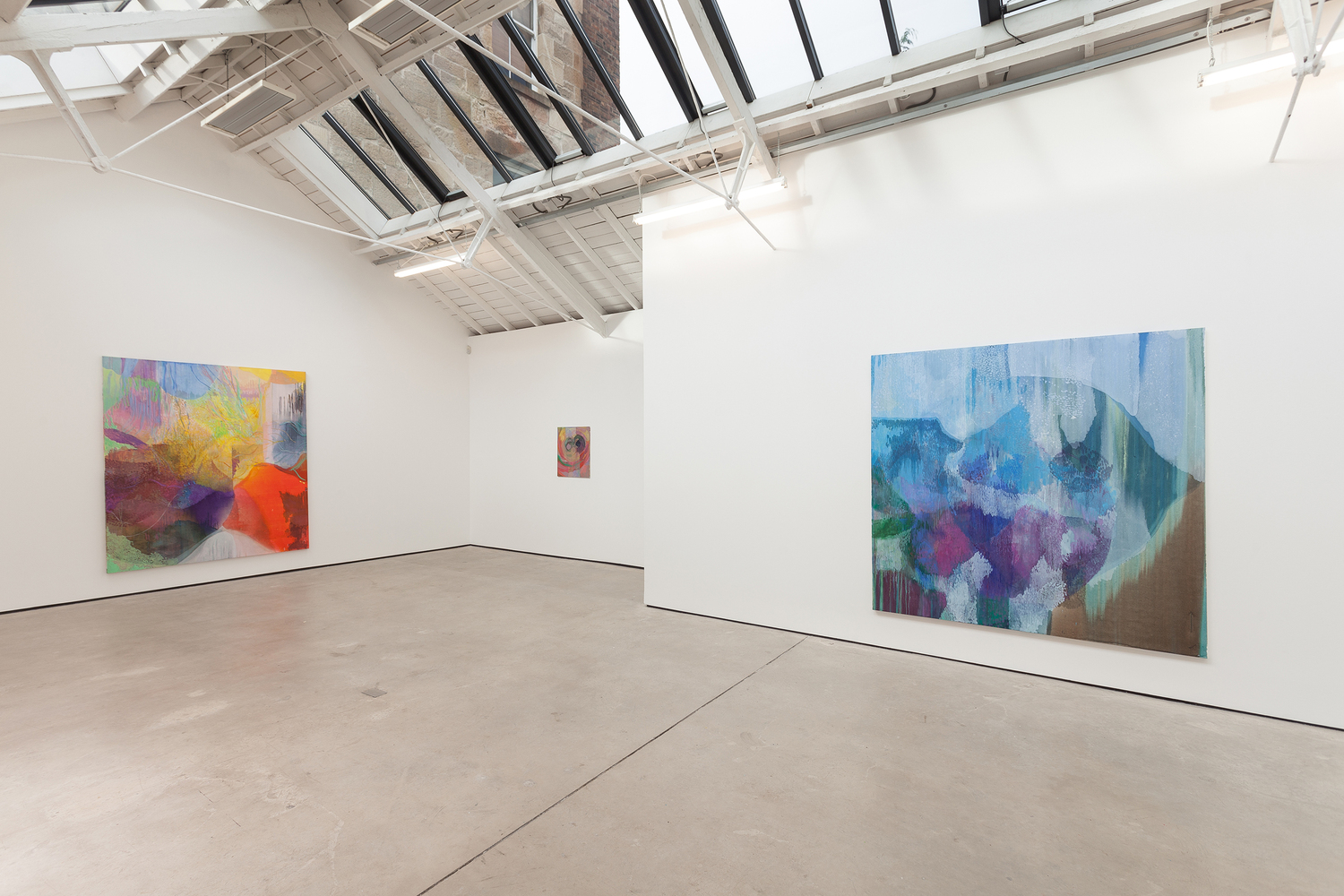 The physicality radiating from Victoria Morton’s luscious, almost hallucinogenic surfaces is inescapable – from precise applications of paint in her forthright smaller works, to bruised, evaporated zones of overlapping colour in her large canvases – her stern examination of material and commitment to process is unwavering.

Gestural, animated drawings offer indications of form, only to be consumed by the drip and soak of pigment and turpentine – a corporeal tension between opposing methods of application that transmit the palpable psychological situation driving her performative painting. Unconcerned with painterly cues of perspective and traditional figuration, Morton allows her actions to circulate, assemblages of colour and line tracing shape and space, building surfaces that vibrate with narrative potential and direct energy. Distilled and composed, the canvases are designed to unfold over time, expanding the space and structure of the painting into the mind of the viewer.

In her latest exhibition ‘Treat Fever with Fever’ at The Modern Institute’s Osborne Street gallery space, we encounter new paintings that expand upon Morton’s enduring investigations of nature, biology, desire, and loss, alongside meditations on musical composition, deep colour perception and memory – stimuli that enable her to articulate and understand the complex personal narratives of lived experience. Depicting the space and experiences of the body in a non-singular manner.

Living and working between Italy and Scotland, Morton’s practice unifies the distinct influences of these two locations. Many of these works that began in Morton’s Italian studio emit the intensity of summer, yet – displaced, reworked and combined over a Glaswegian winter – Morton creates a tangible temporal shift that permits space for reflection and alters the conditions of realism. Indeed, although bound to the context of their production, Morton’s visual language allows her to convey memory of place and time as it truly is: a non-linear accumulation of imagery and forms that fragment and morph over time – akin to the layering and reworking of paint on canvas.

Morton’s paintings pulse with opposing physical sensation, from the liberated movement of ‘The Opening Sex’ (2019) and ‘The Daughter Cell’ (2018) to the blue hues and nebulous forms of Place of no Sun’ (2019) and ‘Broken Waveform’ (2019) that evoke a more contemplative emotive response. It is this palpable bodily presence within Morton’s painting that claims space for the externalising process of her practice – her ability to shed light on the internal psychology of self – that which over time, becomes articulated forms.

In October 2017, The Perse School Cambridge installed Morton’s completed tapestry, which was gun tufted over 8 and a half months based on one of her paintings. In 2018 she undertook a short residency at Hospitalfield, Arbroath, which further developed her musical interests as part of her wider practice. Morton is currently working with Hospitalfield on a new textile commission for Hospitalfields’ new accommodation building as part of their Future Plan capital development.