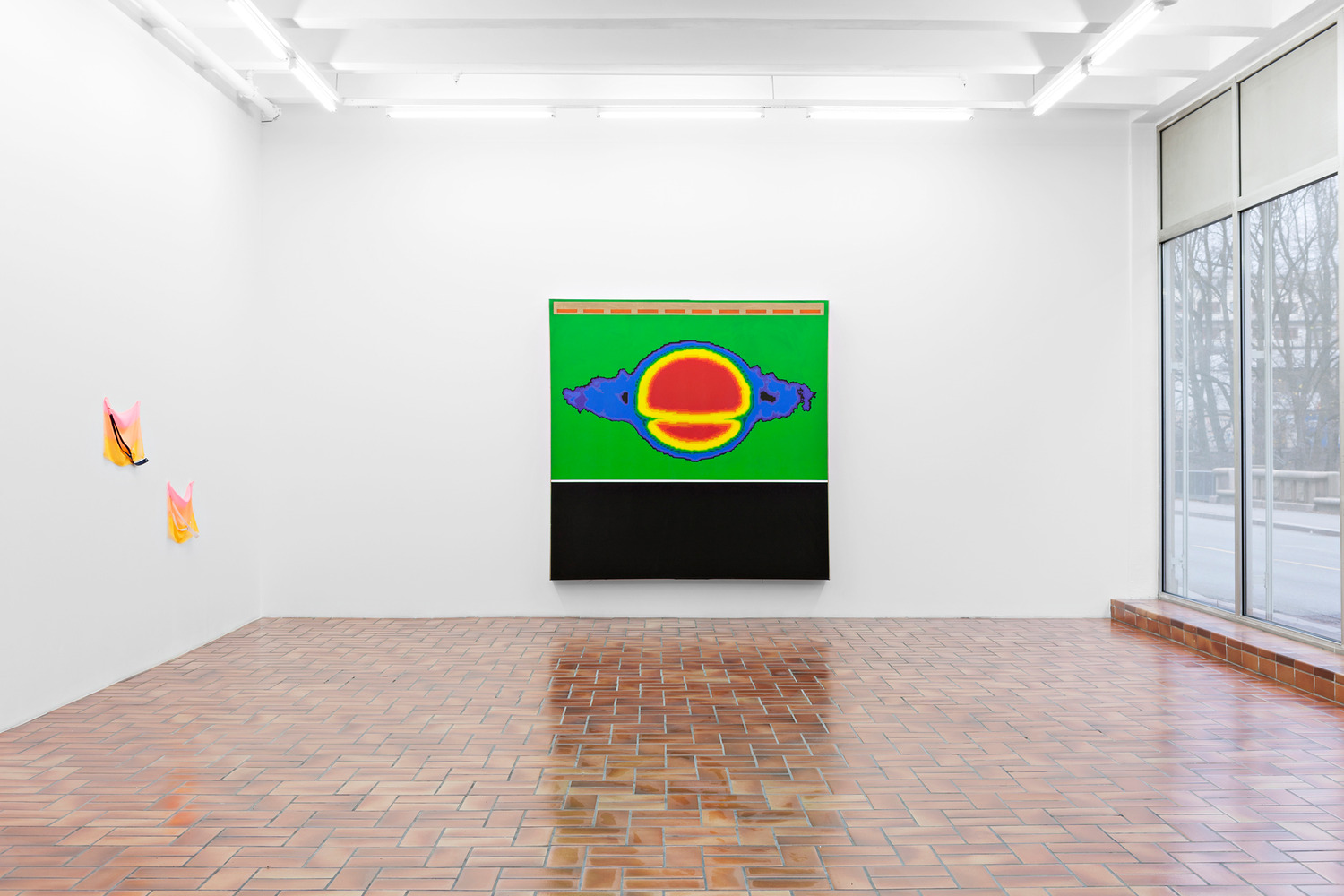 “We must not, therefore, wonder whether we really perceive a world, we must instead say: the world is what we perceive.”
– Maurice Merleau-Ponty: Phenomenology of Perception, 1945.

“Obviously the strip [film strip] lends material expression to the gaze as function: its scansions, its off-screen spaces, its excesses, its lacks. Proceeding by variations, it forms and formulates the same, unceasing question: How far can one go in showing less to see more? How much of the visible can be anticipated, guessed, extrapolated, concealed, so that its share of absence can be reconstructed from the fragments of its presence?”
– Raymond Bellour, “The Form My Gaze Goes Through”, 1986

It is almost impossible not to consider it as an act of compensation, the first work when entering the exhibition space. Simon Starling’s “Three Day Sky” is offering what is becoming a constantly more rare sight in Oslo during these autumn days: a blue sky. While it may only be a painting onto the gallery ceiling, it is nonetheless reminding one of an alternative to the led grey lid permanently resting on top of the town for still many months. Out of time, one would claim, and out of space, one would equally have the right to claim; the source for the work by Starling is to be located more than 3.000 kilometres away. As opposed to Oslo, the Tabernas Desert in Andalucia, Spain, will most likely offer sun today. Here, in what is in fact the sunniest spot in Europe, a solar panel has charged the battery that was used to power the airbrush kit while making the painting. In the utmost of circular logic the sun has sourced the depiction of itself. Not only does the work offer evidence of Starlings’s particular interest in conditions of circulation or recirculation, but also in terms of translation of vision. While the stolen and stored battery energy may not suffer any loss with distance and time, the memory attempting to recapture the sensation of the sunlight is far more porous.

The limitations to our senses, and more specifically those concerning the act of seeing, are also at the core of the work by Jack Goldstein. The untitled painting, dating back to 1986, is rendering what could be a particle collision or a galactic explosion. While such an image has long since been made familiar by countless of science journals and documentaries, it is regardless one not possible to witness by the human eye unless aided. Rather, Goldstein’s interest was with how computer technology – back then as is the case now – would serve as an extension of the human eye and provide this sort of new imagery. The bright and bold colours employed, attempting to capture the phenomenon as it would appear on a computer screen, reveals as much of an interest in the supporting structure needed to observe as what is being observed. This digital artefact would be further enhanced by Goldstein attempting to erase traces of the human hands involved in the production of the painting: making use of airbrush and elaborate stencilling, removing pencilling outlines, and sanding down after each layer of paint.

Seeking a far more firm if not more factual quality are the two adjacent works by Martin Boyce and Eva Rothschild. The work of the former, entitled “On the Other Side of the Glass – a Storm”, takes the shape of a grey horizontal slab interrupted by a circular window, in which a sheet of perforated steel partly prevents and partly permits a view through the work. Equally, the relation between obstruction and transparency becomes a central concern with the work by Eva Rothschild situated in the window sill facing the street. The glossy rectangular frame – cast in aluminium, fiberglass and jesmonite – is resting up against the window pane, making the centre of the sculpture something between a void and venue of changing scenery. As is the case with the sculpture by Boyce, the work is located between discretion and condensation – their geometric abstraction effortlessly picking up on elements of the 1930s architecture of the gallery building while suggesting something far more arbitrary than the techno-economical concerns primarily associated with building. In his discussion of Boyce’s production, writer Caoimhín Mac Giolla Léith makes use the term “condensation” and finds within these works a “Freudian sense of a dream image drawn from several disparate dream-thoughts, and contamination, the adulteration of the object or image by material extrinsic to it”. Imagination – with the subconscious as much as the conscious act of seeing – completes the image.

The arbitrary remains part of what we gather as facts. The Brazilian poet Augusto de Campo, recognized as the founder of concrete poetry, summarized its essence as: “tension of things-words in space-time”. In the works by Sue Tompkins the tension is at its most delicate, a simple safety pin holding sheets of fabrics together. The impermanence and imperfection of these compositions pointing towards the film installation next door, “Leader As Gutter”, a collaboration between Luke Fowler & Toshiya Tsunoda. Onto a stack of sheets of Plexiglass a 16 mm film is projected – the image distorted by the rough edges of the sheets and the light of the projector bleeding onto the wall behind – giving a peripheral sliver of light and sliver of sight. The field recordings – echoing sounds and scatterings of light (we continuously think and perceive things in both time and space) – are adding to an already vast archive of space / time fragments retained in our consciousness, to be experienced once again, in relation to a different layer of time.