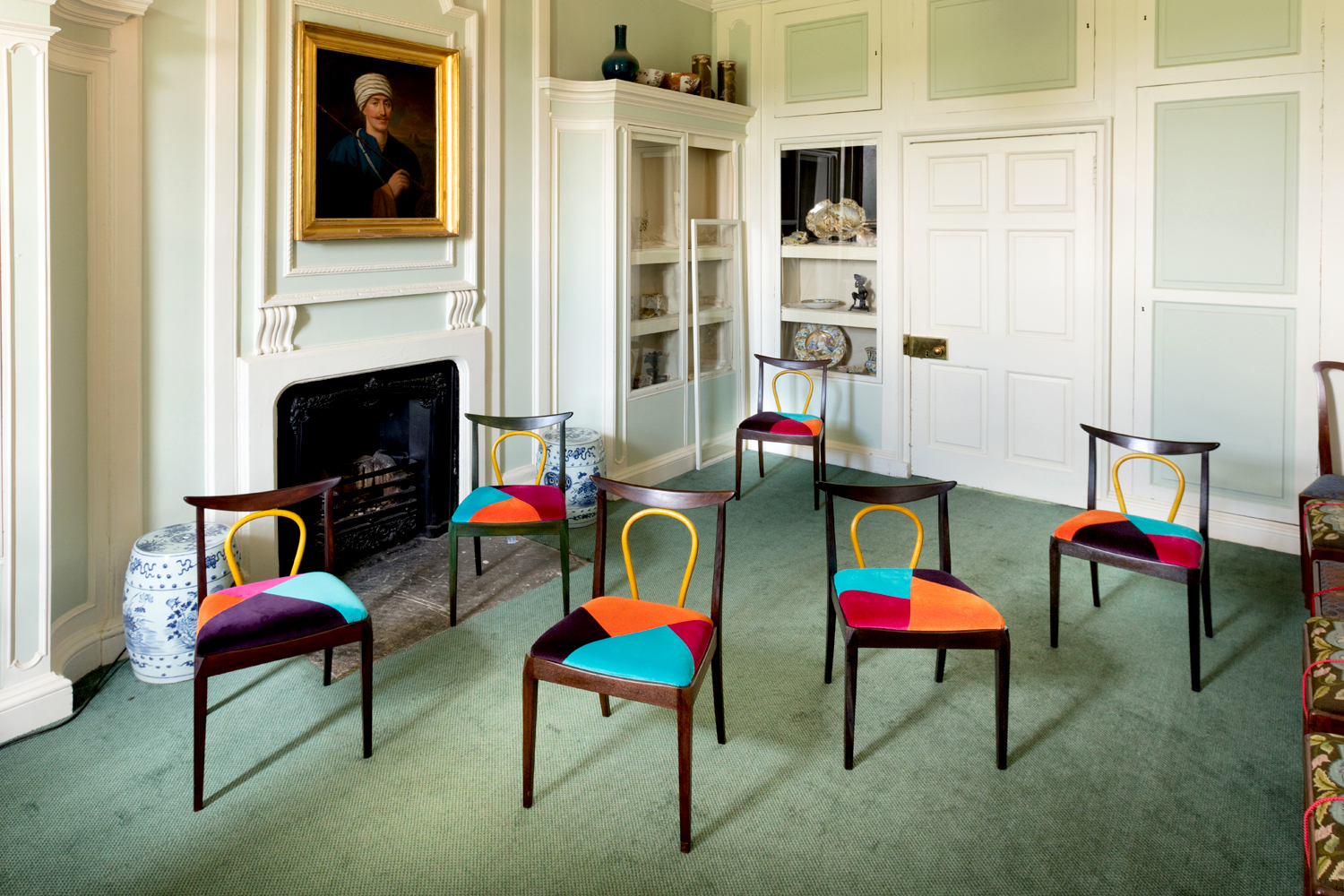 ‘Middle Chair’ is a project presented by The Modern Institute taking place within Pollok House, which brings together chairs made by Italian designer Martino Gamper, installed throughout the 18th century stately home.

Replacing several of the chairs in the house’s interior collection, Gamper’s intervention places his contemporary design pieces as a central part of the existing display and function of the publicly accessible house. Contrasting the period furnishings, Gamper’s uniquely built chairs are hybridised forms using found pieces of furniture, cut and assembled with new materials. Intended to assume the roles of either display chairs, within the collection exhibits or as chairs for use by invigilators and visitors. Gamper’s chairs can be found as a main part of a room’s display set up, as if part of the originally operational house – a desk chair in The Morning Room, or a dining set around the existing table in The Dining Room. Gamper’s chairs can also be found on the edges of the corridors and rooms, amongst the many not-in-use chairs within the house’s collection, as well part of the current functioning chairs, replacing the stackable modern chairs in daily use.

Martino Gamper (b. 1971, Merano, Italy) lives and works in London, UK. Starting as an apprentice with a furniture maker in Merano, Gamper went on to study sculpture under Michelangelo Pistoletto at the Academy of Fine Arts, Vienna, and product design in Vienna under Matteo Thun. He completed a Masters in 2000 from RCA, London, where he studied under Ron Arad.
Working across design and art venues, Gamper engages in a variety of projects from exhibition design, interior design, one-off commissions and the design of mass-produced products for the cutting edge of the international furniture industry.

Gamper was the recipient of the Moroso Award for Contemporary Art in 2011, and the Brit Insurance Designs of the Year, Furniture Award in 2008 for his project 100 Chairs in 100 days. Gamper has produced the ‘Vigna’ family for Italian design company Magis.

Located within Pollok Country Park on the Southside of Glasgow, Pollok House is the ancestral home of the Maxwell family. Originally built in the mid-18th century, Pollok House was extended in the early 20th century, and was given to the City of Glasgow in 1966. Displayed within the house is a large, private collection of Spanish paintings, as well as glass, silverware, porcelain and antique furniture. National Trust for Scotland was founded in Pollok House in 1931, the house has been managed by the trust since 1998.

The Modern Institute would like to thank the National Trust for Scotland for their support in the realisation of this project.