Jesse Wine ‘Carve a hole in the rain for yer’ 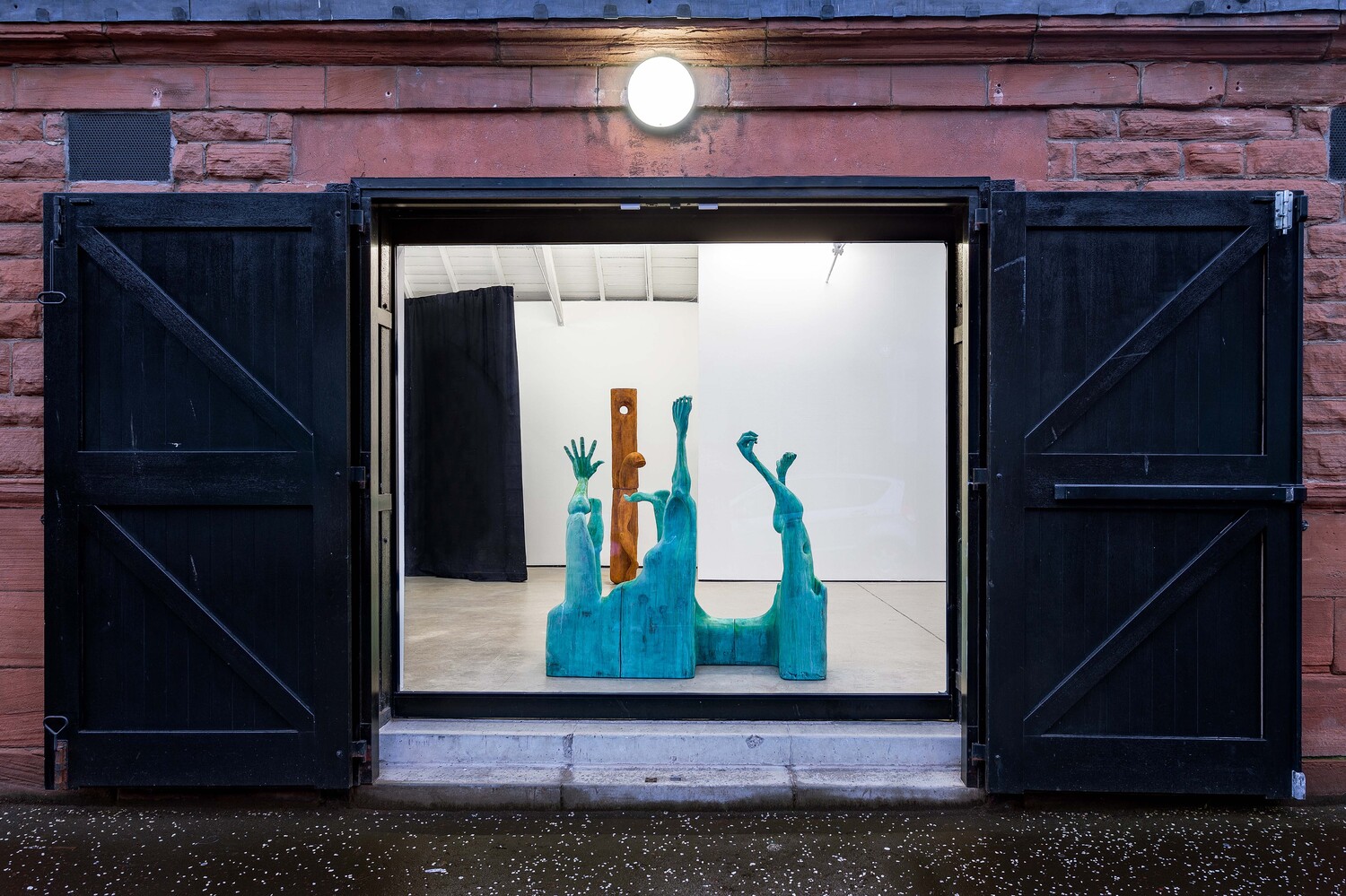 The Modern Institute will be presenting New York-based, British artist Jesse Wine’s first solo show with the gallery. In this new series of works, Wine continues to demonstrate his intuitive engagement with sculpture through themes of autobiography and existentialism, with a touch of surrealist humour. From familiar objects to larger-than-life abstracted figures, for this iteration we see Wine pushing the ruminative sensitivity in his bodily ceramic works.

Wine’s work entices: we first enter a curtained lilac bedroom wherein lies a mattress, an ever present and viscerally sensitive object in art history, calling to mind Gian Lorenzo Bernini’s Sleeping Hermaphroditus. Emerging from it: an outstretched arm, two legs, one foot firmly planted and the other daintily stepping off, and an indented pillow, establishing the presence of a semi-existent being. At the sight of these life-sized hands and feet, a sense of heightened self-awareness is roused as we become more conscious of our own limbs, connecting our body with the work and environment presented.

Next, strewn in the second domain are three disembodied glass heads, resting on their sides with closed eyes they appear to be asleep. Objects spill from an opening in the cranium, as if alive with tangible thoughts. Informed by the semi-body on the mattress, these floating heads suggest the dreams or subconscious wandering; which begs the question of whether the work is activated by the viewer or already sentient.

A series of curtained divisions pace and isolate the experience of each sculpture. As we gradually progress the sculptures embody a taller, solitary agender frame and become increasingly fragmented. Some are pared down to a single leg and cylindrical torso, conjuring impressions of ancient ruins and artefacts. However, rather than posed in tranquility, the forms peel away from their individual pillars, its leg ready to run. In Item of mortality, though the pronounced foot is facing into the structure, remnants of fingers form a half-hand, pinching the skin of the sculpture — presenting a notion of existential questioning. Similarly, On time tears itself in two, its split torso facing in opposite directions as its classically modelled lower half remains steadfast in posture. Furthermore, this upright figure stands on a round base, reminiscent of a clock, its title proposing that the sculpture is physically standing on time.

Wine’s sculptures are tantalising and laden with references: the hole in The smell of sculpture can be interpreted as a direct relation to the show’s title, taken from the Mark E Smith/Fall track that was composed for Michael Clarke and Charles Atlas’s Hail The New Puritan, its sensory choreography imitated by the motions of hands and feet evidenced throughout. The hole simultaneously acknowledges the orifices typical in esteemed British Modernist sculpture by Henry Moore and Barbara Hepworth, whilst playing with its own modernity in its rusted and decayed state. In opposition, For the time been becomes a monument to the past in a much gentler manner, its organic, moss-like surface, reminiscent of an untouched surface preserved by nature, unlike its rusty counterpart.

In the window, the jostling limbs of Presently, reach up and out towards the viewer and the sky. Whether these body parts are autobiographical, fictional or a mirror of our own, of the dance-like flourishes one particular gesture is reminiscent of Michaelangelo’s Creation of Adam, suggesting that the viewer’s presence has activated life in the sculpture, or returning to the consideration that perhaps life already exists. The blue-green oxidised copper surface evoke associations of weighty and aged civic monuments and architecture but Wine’s frenzy of elongated, near absurd forms, emphasise its human essence in contrast: once again, returning the focus to the universal body. In all of Jesse Wine’s sculptures, in mimicking the human form it mimics human behaviour; thus activating themselves and, despite its subtle preternatural, acephalous forms, its pronounced limbs succeed in communicating real human emotion: striving to be seen, to be.