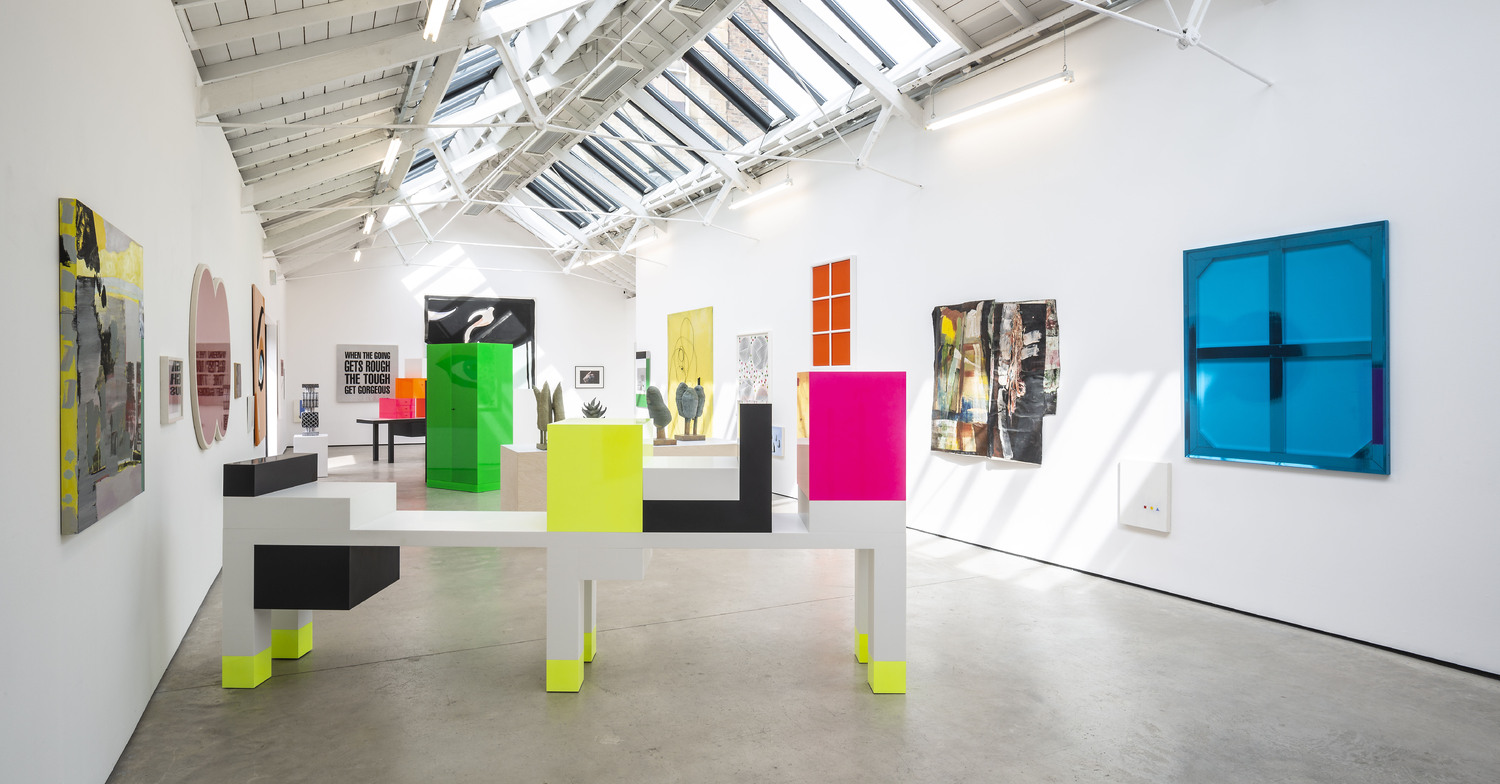 EXPLOITS
accompanying text by Will Bradley

The word ‘exploit’ has a technical meaning to computer programmers. It’s not a bug in the code that sends everything haywire, and not a hack, which is a forced break-in. It’s not even a feature, which is a bug that does something pointless but non-destructive. An exploit is a flaw in the design, a gap in the structure, an open door where there should have been a wall. It lets you go somewhere you’re not supposed to go.

Mescaline and LSD are exploits in human perception. They make it possible to get inside the system. For a long time it was believed that hallucinogenic drugs accessed other worlds beyond this one, that they were the key to knowledge from outside, visions that were powerful but unreliable and had to be interpreted, decoded, revered. These days we know that the psychedelic experience is a manifestation of the very structure of our perception, it’s inside our heads. These days it’s the world we see when we’re straight, the real world, that’s somewhere outside, uncertain and mediated, and not to be trusted.

If we had to figure out the meaning of everything we saw or heard or felt from first principles we’d be useless as babies, overwhelmed by information, stunned by all the pretty lights. Luckily we learn, and we take short cuts. When we see the back of someone’s head we can assume there’s a face on the other side and most of the time we’re right. When we get the hang of it, we can watch ten minutes of a film, read a paragraph of a book, have a five minute conversation with a stranger, hear the first eight seconds of a Madonna single and we think we know what to expect. Even better, we have ways to cut out the donkey work. We read reviews, we take advice, we only go to certain clubs, or cinemas, or cities, or countries. We learn to rely on received interpretations.

Since the mid-1960s it’s been accepted that the meaning of art, or of most things, is a moving target. Everybody knows that an artist can’t control the way their work is received – that everyone who sees a given artwork will have a different experience and will give it a subtly or wildly different meaning that will also change from day to month to year. But once a work gets given its place in the canon of art history, in the museum or the catalogue, most of those unique interpretations are reframed as wrong, or ill-informed, or just no longer relevant. We get the shortcut version. The work becomes the emblem of its own significance, and that’s the thing that strangles it, traps it in a well-maintained dead-end.

Jorge Luis Borges suggests a way out. In the essay ‘Kafka and His Precursors’, he lists several unrelated texts: Zeno’s famous paradox against movement; a paragraph written in the 9th century by Han Yu; Kierkegaard’s religious parables; Browning’s poem ‘Fear and Scruples’; a story by Leon Bloy; and ‘Carcasonne’ by Lord Dusany. He explains his choices by saying: ‘If I am not mistaken, the heterogeneous pieces I have enumerated resemble Kafka; if I am not mistaken, not all of them resemble each other. This second fact is the more significant. In each of these texts we find Kafka’s idiosyncrasy to a greater or lesser degree, but if Kafka had never written a line, we would not perceive this quality; in other words it would not exist … His work modifies our conception of the past as it will modify the future’. If you follow Borges’s argument through, it doesn’t rely on Kafka for its effect. Everything that happens alters our conception of the past, and our desire for the future is to remake the past, to justify it. But this isn’t confined to the distant past or to lost literature. It applies just as well to very recent events. All of history that we know or understand is implicated in this two-way communication, because we experience it all right now – there is no other way.

Sometimes it feels like a mystery why artists should struggle – and some of them do definitely struggle – to make more things when the world is already overflowing with things. Objects multiply. A sword creates a shield, the car designs the highway, the process repeats; things agglomerate, lock together. Artists can’t compete in these conditions. The desire to remake the world is the megalomaniac impulse of a dysfunctional personality, futile and irrational. Given the world we’ve got, though, it looks sane and even necessary, but artists can’t do it by themselves. Even art can’t be redefined by artists alone.

Sometimes, looking at an exhibition of art, you can get the feeling that the objects it contains want to get out, to break free of the containing order and run wild. But they need assistance. A radical aesthetic isn’t necessarily a convulsive revolution, an assault on convention or a dive into obscurity. It’s anything that can lead you into a reassessment of formal language, a refusal to accept orthodoxy. It’s the fake, the pastiche, the unfashionable. It’s the handmade, the forgotten, the substitution of an obvious lie for a false claim of truth. It’s industrial production understood as politics, or the idea of beauty as something specific that cannot be transferred. It’s a pathological sensitivity to ideological content and context and, above all, it’s deliberate misreading.

Most ideas in the history of art can be usefully misread, mirrored, turned upside down. Minimalism, for example, the most Modern of formal movements, is a reiteration of ancient forms and structures. Its simplicity is pure mannerism, a performance for the art world, elaborate and contrived. Because it denies realism, the works it produced are perhaps the most allusive and romantic ever made – they’re kaleidoscopes, mathematical baroque, ecstatic visions. They imply that the infinite, the sublime has not been lost, but is only trapped by its own image, its own reflection. Expressionism, in contrast, has an aesthetic of absolute precision, because it aims for the creation or transfer of specific meanings and sensations. It’s method-acting, a denial of the conditions of representation.

Historical forms and ideas can be reused not as inspiration or quotation but as raw material. Functionalism becomes ornament, decoration becomes ideology, buildings are designed to leave beautiful ruins. Objects seem to hallucinate themselves, caught between the basic physical attributes that enable them to function and another set of forms that are trying to somehow materialise in the space they occupy and take them over completely. Order and disorder are exchanged. In the rigid confines of modern society it’s necessary to introduce disruption, confusion. In the wreckage of modern civilisation, there are moments of balance and harmony that need to be preserved, given space.

It’s possible that this openness, these exploits, will be short-lived. For all the talk of the disposability of contemporary culture, art these days is built to last. Artists have acid-free papers, glues and sizes, light-fast pigments and permanent dyes, non-corroding alloys, archival tape, lossless and infinitely copyable digital recording media. Art is made in the light of the uncertainty of history for a precise future. No more will future generations have to struggle to interpret a weathered Neolithic cup-mark that has somehow survived three and a half thousand years on the back of a fallen stone in a field on an island in the North Atlantic. There won’t be any ‘Last Supper’- style controversy over colour schemes, no painstaking reconstruction of faded manuscripts. Our culture will live on, because we have created not only the artefacts themselves but the means of their preservation for future generations. It’s likely, however, that this won’t help at all.

At the end of human history – which I’m assuming is at some point in the distant future and not just around the corner, though it’s easy enough to make the opposite case – there’s a museum that contains just about everything that survived until the sun burnt out, or everybody left the planet, or we all turned into lizards, or we just stopped caring too much about the past and we threw it out. Somewhere in the museum, which is massive and labyrinthine and takes many months to journey through, is a department that holds everything now contained in all the museums on earth. It’s a small department, in comparison – because even now more people are living than have ever died and more history is being made than has ever existed – but it’s important, because it contains the primitive beginnings of the race. Somewhere in this department is a tiny sub-section which is the section of art, and somewhere in there is a sub-sub-section devoted to the twentieth century, the era in which the category of art began to disintegrate. It causes conflict among the curators of the museum. Some of them want to organise the exhibits according to contemporary ideas, so the audience can better understand them; others want the displays to reflect the values of the ancient world. This second group argue that the artefacts cannot be comprehended without an understanding of the environment in which they were originally made. But the second group are also opposed by a third group whose research has led them to believe that the function of the artefacts was never precisely understood or agreed upon even at the time of their creation. There is evidence that, in some cases, even the original makers were reluctant to elaborate their meaning or purpose, and that for every interpretation it is possible to find a refutation or opposite reading. Some even venture to give this last suggestion the status of a historical law.