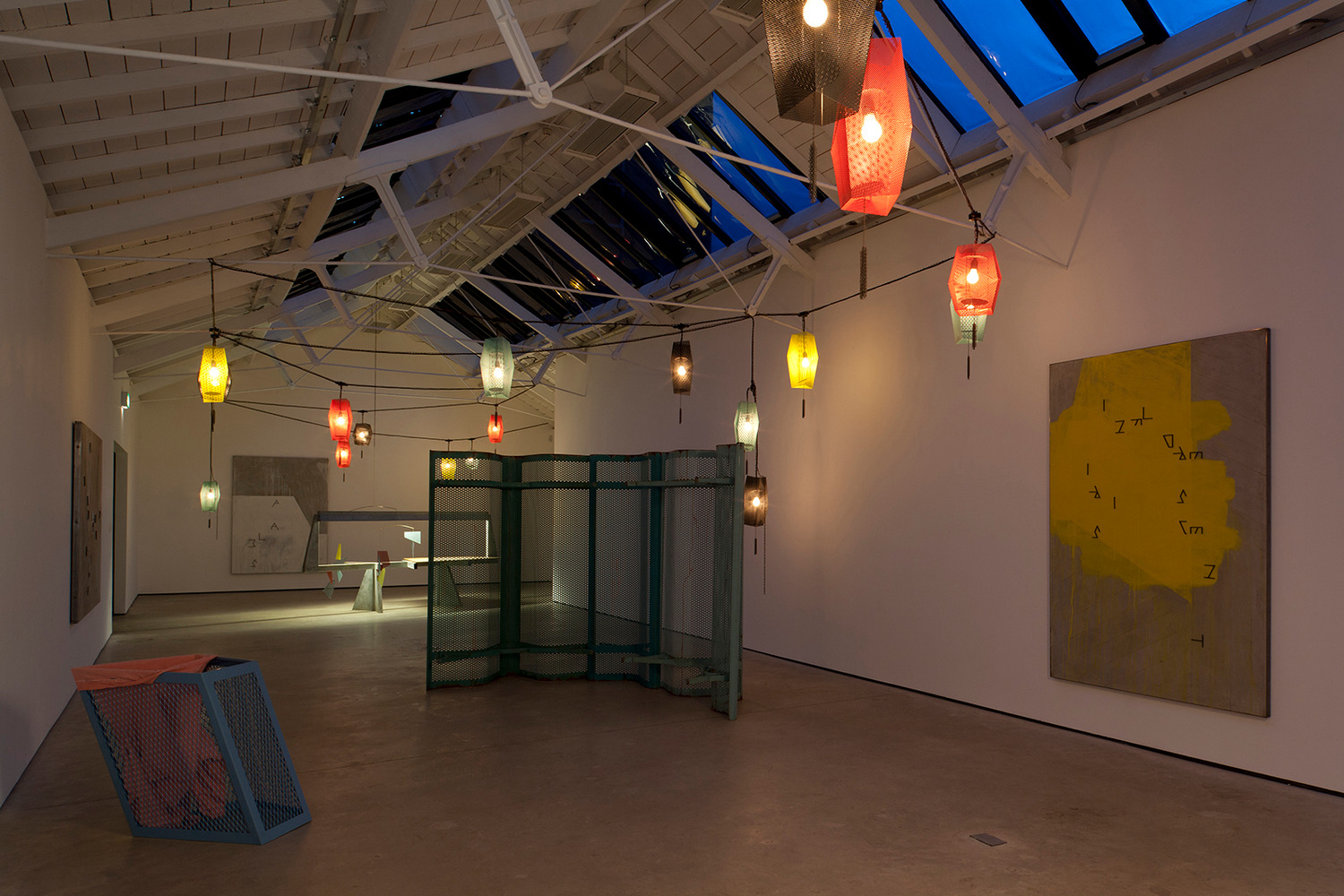 The Modern Institute is delighted to present an exhibition of new work by Martin Boyce. Boyce’s work generates ideas of exterior landscape within the gallery space, creating imaginary spaces which could be considered as moments frozen in memory, or as he has said, ‘allow the possibility to step inside a glimpse’.

For The Modern Institute, the darkened gallery will be delineated by chains of perforated steel lanterns, which will illuminate a series of wall panels and sculptures. The wall panels support texts in Boyce’s own typography and the sculptures include a displaced library table, presenting itself as an illuminated manuscript and steel park benches which create an undulating screen.

In the upstairs gallery a set of photographs from Boyce’s photo archive will be exhibited for the first time. Many of the photographs record pattern within landscape.

Martin Boyce’s work engages with the urban fabric and the legacy of urban forms to create atmospheric installations, evoking landscape through precisely explored sculptural details. His work is often constructed from a complex visual language of historical furniture that importantly position themselves in relation to the present rather than the past. Boyce is interested in the production of these pieces and how their original, political and aesthetic ethos has changed over time. His meticulous sculptures bear out his imaginings for the alternative lives these objects might lead if they were somehow imbued with a psychological makeup.

The Modern Institute is pleased to announce that Martin Boyce has been nominated for the 2011Turner Prize. The nomination reflects the stature of Boyce’s practice and the critical acclaim and recognition it continues to receive. His work will be shown at Baltic, Gateshead from 21 October 2011 – 8 December 2012. The prize-winner will be announced on 5 December 2011.

night terrace – lantern chains – forgotten seas – sky is Boyce’s third show at The Modern Institute, Glasgow; other solo exhibitions include Out of This Sun, Into This Shadow, Ikon Gallery, Birmingham (2008); For 1959 Capital Avenue, Museum fur Moderne Kunst, Frankfurt (2002); and Our Love is Like the Flowers, the Rain, the Sea and the Hours, Tramway, Glasgow (2002). Boyce’s work has been included in numerous group exhibitions such as Modern British Sculpture, Royal Academy, London (2011), The New Décor, Hayward Gallery, London (2010) and We Burn, We Shiver, Sculpture Centre, New York (2008). In 2007 he presented work in Skulptur Project Münster, and in 2009 represented Scotland at the 53rd Venice Biennale with No Reflections.