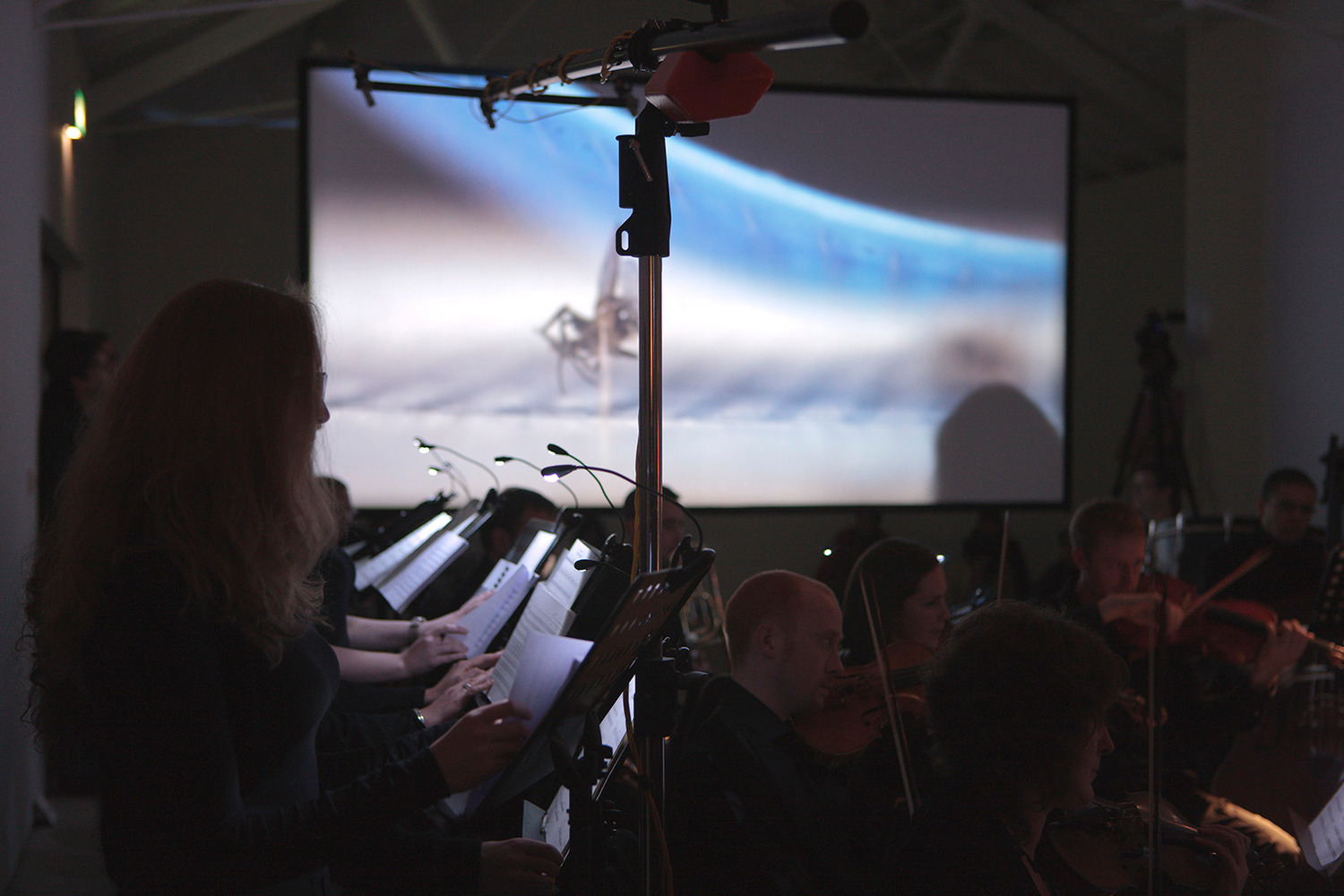 The Modern Institute is delighted to present Henrik Håkansson’s new work ‘The End’. This 35mm film depicts in extraordinary detail, the life cycle of a fly. On the evening of the 25th November, the film’s score, composed by John Coxon, and conducted by Jessica Cottis was played live by an amassed group of musicians and singers. Evidence of the event remains in the gallery, alongside the film, the score and a documentary film.

Håkansson is a naturalist who has repositioned his fascination with nature into the art world, over time becoming an accomplished amateur expert. Focusing on the minutiae of nature, but often presented on grand scale, his projects combine the interests of a biologist, an ethnologist and an artist, recalling the nineteenth-century explorers who documented the natural and cultural riches of then little-known lands and unknown environments. His new work investigates in a poetical and philosophical way man relates to nature. Like Håkansson’s other sound and light installations, The End is based on traditional scientific approach to analysing a subject, by using observation and registration.

In 1995, he played electronic music to tree frogs, recording their response; and ten years later arranged a concert at the Royal Academy of Music in which a single goldfinch performed live to the audience. His work makes apparent elements of the lives and routines of animals, insects and plants, that are not profiled or explored by traditional scientists. The apparatus used in gathering images and sound are often present in his installations, making clear Håkansson’s role, and his close proximity to his subjects.

Henrik Håkansson (b.1968) is a Swedish artist based in Berlin. Håkansson has a prolific history of exhibitions, recent solo shows include MIMA Sound Space, Middlesbrough (2009); Contemporary Art Gallery, Vancouver (2007); ‘Three Days of the Condor’, Kettles Yard, Cambridge (2007); The Dunker Culture Centre, Helsingborg (2004) and Bonner Kunstverein, Bonn (2003). This year his work was included in the Yokohama Triennale, Yokohama; in 2005 The Bird Concert Part 1 (Carduelis Carduelis) was presented at Frieze Art Fair; and in 2003 he participated in the Sao Paulo Biennale and in ‘Utopia Station’ at the 50th Venice Biennale. Group shows include ‘La carte d’après nature’ 2011; and ‘Radical Nature’, Barbican, 2009.