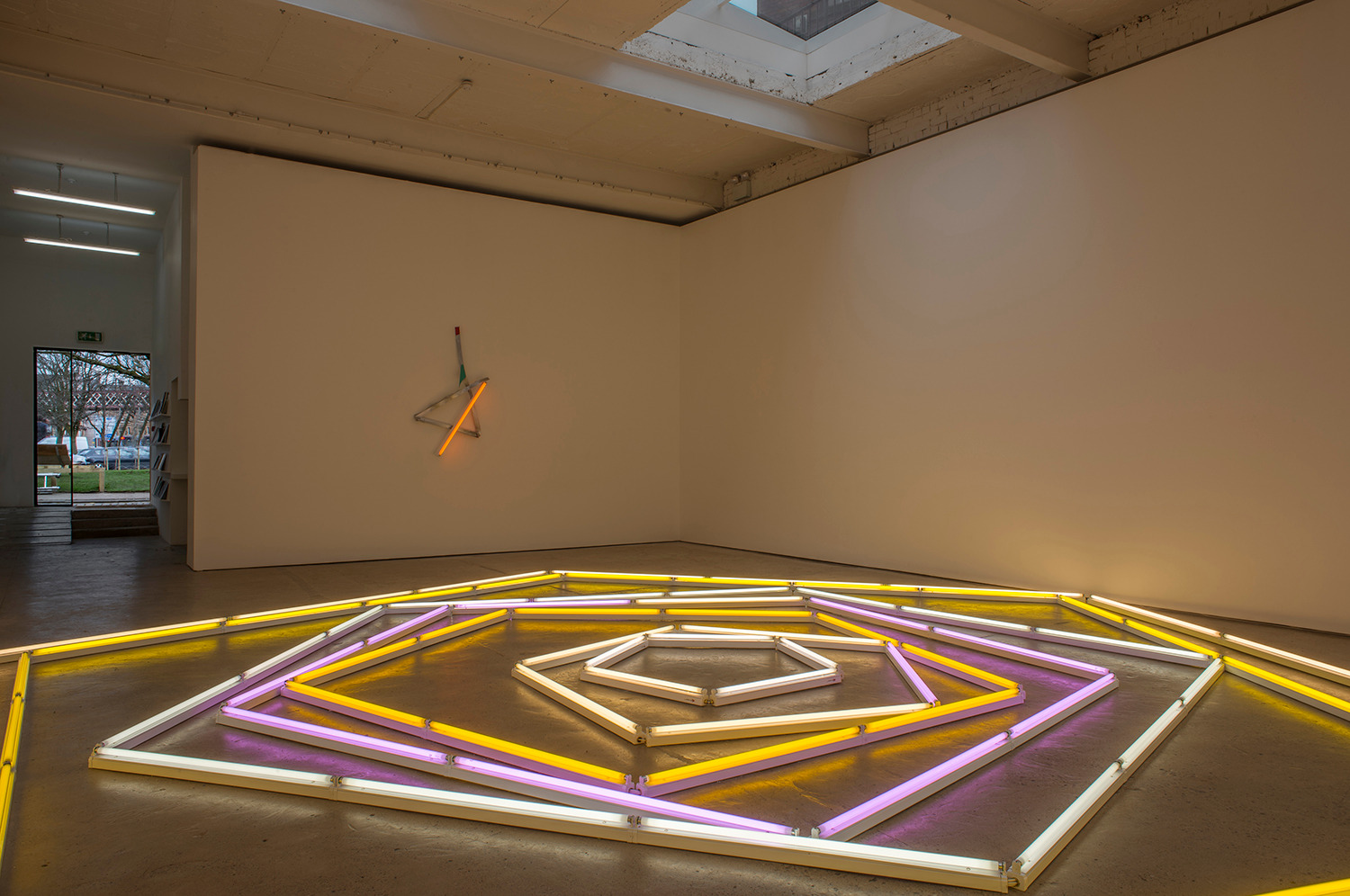 The Excentric Circle, a major new light installation, is an immersive landscape which occupies the central floor space of the Aird’s Lane gallery. This oversized, complex formation of fluorescent light tubes ranging in tone and colour from fluoro-violet to electric and straw yellows, as well as cool and warm light hues, takes the form of eight staggering pentagonal rings. Drawing on both the haphazard fractal beauty of a rose and the titular plan view of The Pentagon in Washington D.C. (a building which is itself is a set of pentagonal rings each trapped within the others), the geometric forms here spin and crash. With the centre point askew and everything revolving around it, the rational geometries grind into each other and against the walls of the room. The shapes are stuck, and at the same time imply a desire to spin beyond the limits of the available space.

“I like the immersive nature of landscape, of being fully within an experience. The physical sculptures hold place within the room, they expand the plane of the light drawings out and forward. By definition you find yourself at the center of any landscape. When you’re looking, the moon is always centre stage…” – Mark Handforth

The mystical, artificial glare from the floor sculpture is counterpointed by a series of three smaller, collage-based, illuminated sculptures mounted on the walls of the gallery – jaunty, kinetic, star-like forms. Each object pointing us in a multitude of directions – we become a part of the motion. These objects stimulate the space by allowing us to have a sense of our own presence and poetically link to the outside world, the cosmos; they speak of the in between, the natural and the artificial, the inside and the outside, the real and the existential.

Handforth has consistently worked within the public realm, and to coincide with his exhibition at Aird’s Lane produced two outdoor pieces that will become part of the greenspace directly opposite the gallery. Under the protective canopy of the trees, an oak bench zig zags between the trunks to form a communal seating area. Claiming a center to this landscape like an errant Maypole, The Twist, a gestural totem for this little green urban island, is an knotted, painted aluminium rod, which arcs and crumples its way to a height of six meters. This anthropomorphised metal pipe, slowly bending, curving, blushing, twisting and tying itself in knots it becomes something like another body on the green; fleshing itself out, both ethereal and grounded.