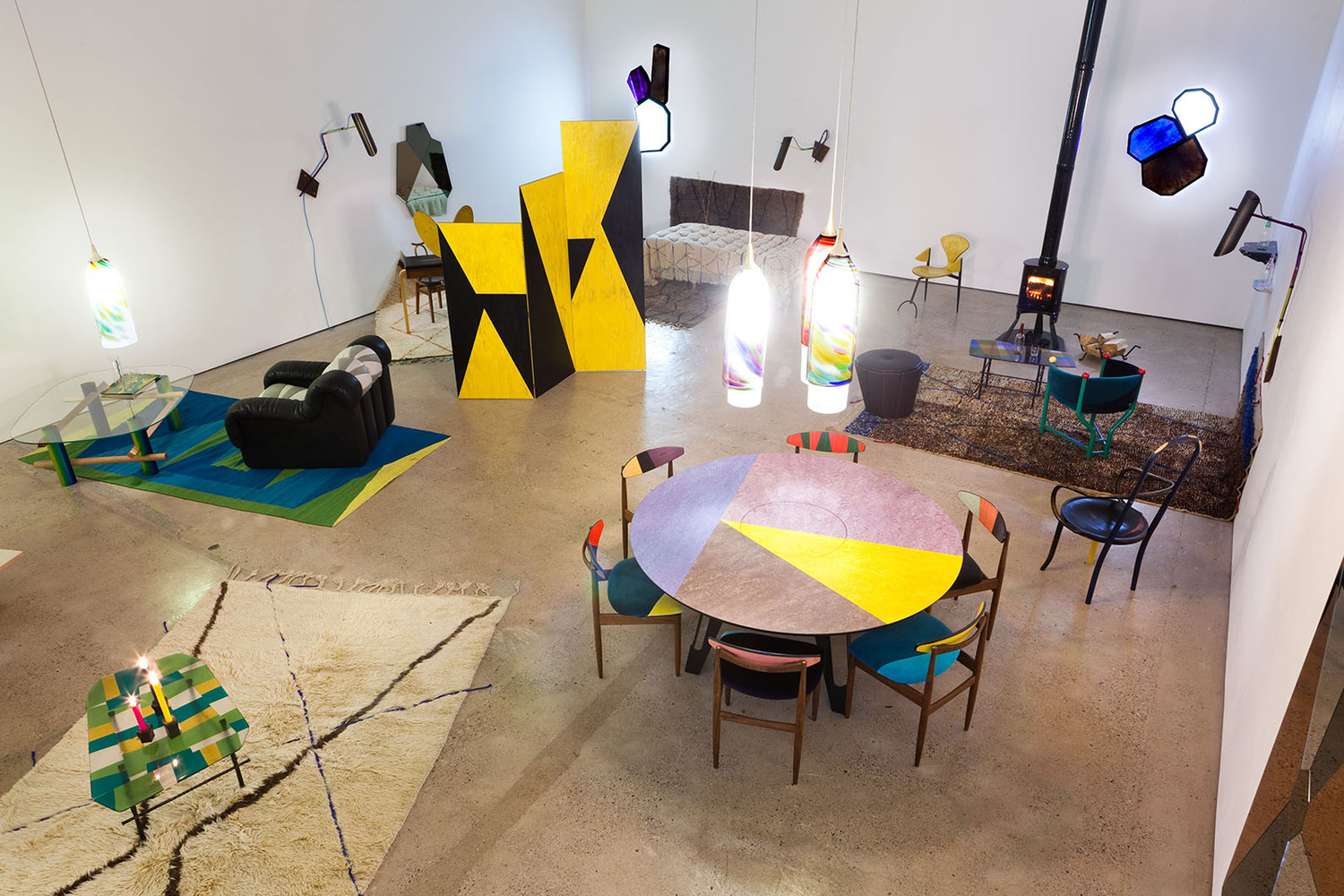 The Modern Institute are delighted to present ‘Tu casa, mi casa’ the first presentation in Scotland of the work of Italian designer Martino Gamper.

Gamper’s practice is infused by spontaneity and a refined ease for working with a variety of materials and processes. While incorporating faithfulness to the history of Italian design, Gamper’s work encompasses artisanal ‘one-off’ pieces, industrially produced design, and design for both social and exhibition contexts.

‘Tu casa, mi casa’ addresses Gamper’s interest in the psychosocial connotations of furniture and use of space. Opposed to a typical gallery presentation, where objects appear stark and decontextualised, Gamper has created an environment within which we are welcomed. The gallery is used a hybrid living space, complete with a wood-burning stove, day bed, table, chairs, carpets and lamps. Gamper’s house is a beautiful homage to craft, design, and domestic functionality.

Inspired by the notions of space explored in Le Corbusier’s drawing Elements and determined indeterminate (‘Proposal for a Living Habitat’, c. 1959), ‘Tu casa, mi casa’ presents an open plan area, separated only by room dividers, creating small islands of furniture symbolising rooms. Gamper has incorporated a variety of materials and distinguished techniques to produce his furniture and objects, such as: glass blowing and fusing, woodcarving, cabinet making, carpet embroidery, blacksmithing and wrought iron processes, marquetry, and enamelling. This amalgamation of techniques references both Arts and Crafts, as well as more industrial methods of construction. Central to the exhibition is Gamper’s systematic adaption of existing objects. Sourcing Moroccan carpets; these have been embroidered and re-configured with geometric lines, allowing them to take on a new unification of pattern and form. An essential element within the space is a circular table (‘Fragmental Dinning Table’), made from linoleum, wood board and powder coated steel; the top presenting segments of colour, which resembles a pie-chart formation. Completing this set are six appropriated teak chairs, titled ‘Friends #1-6’, carved into the back of each comprises the sentence: “The Ornaments in this house are the friends who frequent it”. Appropriating this phrase from one found in an antique shop in New Zealand, Gamper uses it to suggest the thematic underpinning of the exhibition.

Presenting a graphical aesthetic and a disparate use of material, method and re-appropriation of objects, ‘Tu casa, mi casa’ is predominantly a space, which encourages social interaction – a space designed to be functional and communal.

Martino Gamper (b. 1971, Merano, Italy) lives and works in London. Starting as an apprentice with a furniture maker in Merano, Gamper went on to study sculpture under Michelangelo Pistoletto at the Academy of Fine Arts, Vienna, and product design in Vienna under Matteo Thun. He completed a Masters in 2000 from RCA, London, where he studied under Ron Arad.

Gamper was the recipient of the Moroso Award for Contemporary Art in 2011, and the Brit Insurance Designs of the Year, Furniture Award in 2008 for his project 100 Chairs in 100 days. Gamper has recently produced the’ Vignaʼ family for Italian design company Magis.