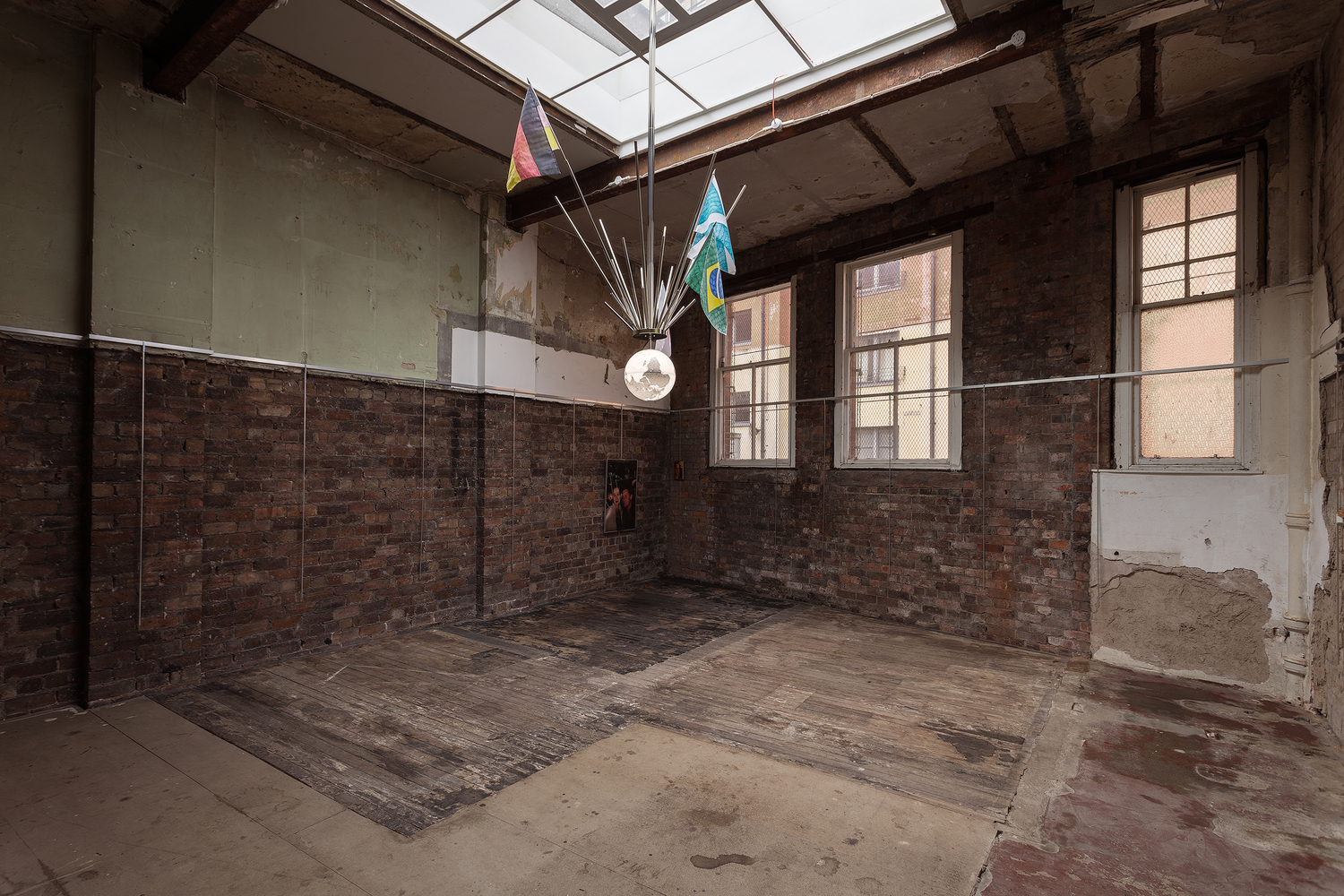 For his first solo exhibition in Europe, Unconditional Surrender, Andrew J. Greene has produced a series of photographs that will be presented on a sprawling commercial display system installed throughout The Modern Institute’s Bricks Space.¹ Taken with his cell phone, each of the images document head-shots and candid fan photos of celebrities found in various Los Angeles bars and restaurants. Printed in the four standard poster sizes offered by the instant photo service at his local pharmacy, the photographs will be displayed on each of the system’s twenty-four vertical aluminum rods.

Hanging in the center of the gallery, Greene has installed a commercially fabricated illuminated globe which is adorned with chrome tubing and national flags that have been hand drawn by the artist in permanent marker. The sculpture, titled Unconditional Surrender, shares its name with the exhibition–which, among other things, references a term describing a military loss so great and decisive, that no guarantees are given to the conceding party.²

The aforementioned sculpture is a 1:1 translation of an existing light fixture found at The Red Lion Tavern, a Bavarian-themed pub in the artist’s neighborhood in Los Angeles. Originally designed to display flags from the 24 countries represented in the World Cup finals, it is now used to hold an array of flags collected from customers visiting from North America, South America, the UK, Europe, Asia and the South Pacific.³ Greene has reproduced each flag.⁴

The exhibition will be accompanied with a text by Los Angeles based writer Olivian Cha.


¹ The hanging system, manufactured by Walker Display is used in schools, offices, libraries, and community centers. It’s designed to securely display and rearrange artwork and pictures without damaging walls.
² The most notable Unconditional Surrender was by the Axis powers at the conclusion of World War II.
³ The light fixture at The Red Lion Tavern was produced prior to the World Cup final’s 32 team expansion in 1998.
⁴ There are flags from Armenia, Australia, Brazil, Canada, China, Denmark, France, Germany, Ireland, Italy, Japan, Lithuania, Mexico, Monaco, Netherlands, Norway, Poland, Portugal, Russia, Scotland, Spain, Sweden, the UK, and the US.


Andrew J. Greene (b. 1988, Chicago, Illinois; Lives and works in Los Angeles), studied at School of the Art Institute Chicago.