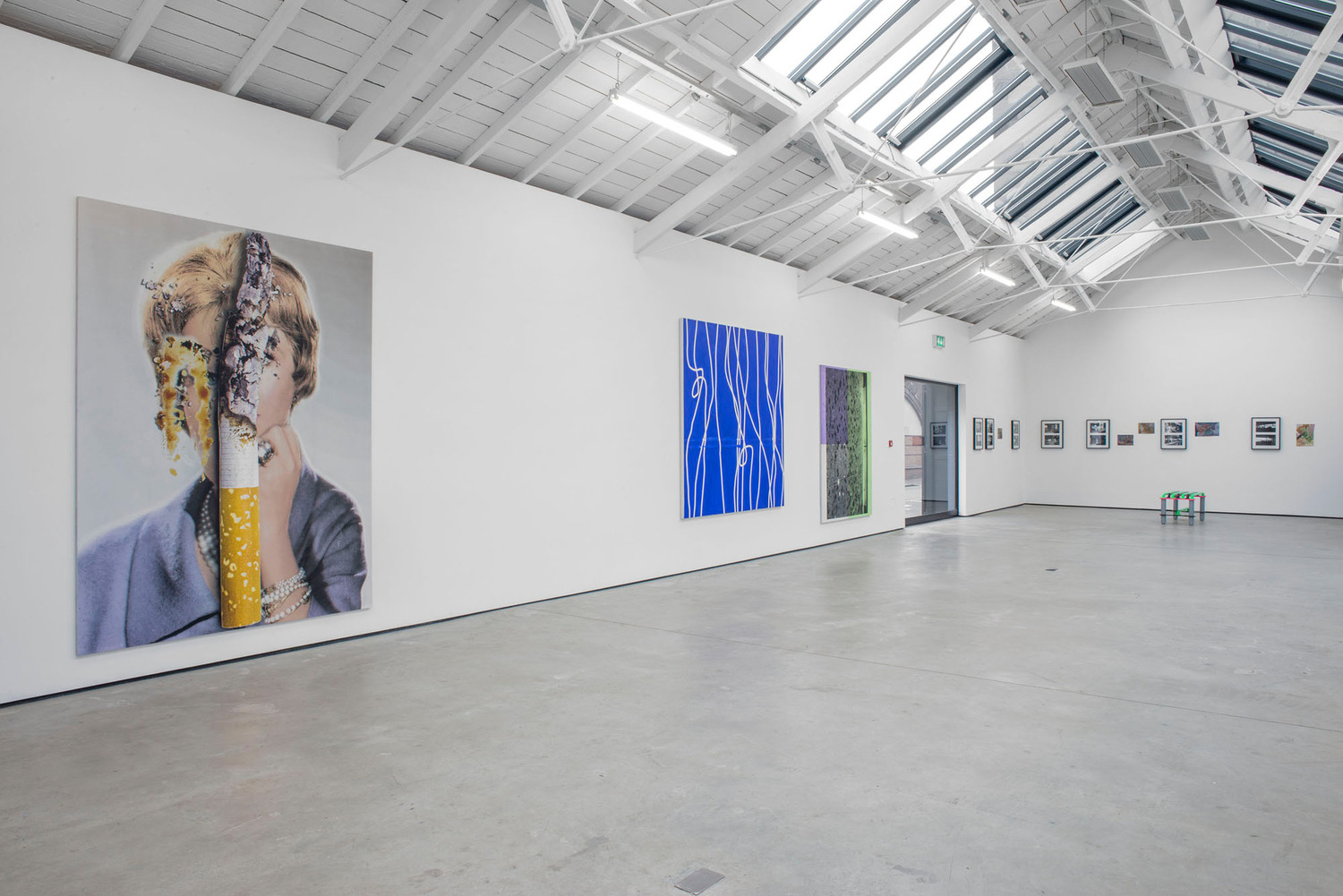 A group of works that describe the similarities between the eye of the painter and photographer – whilst the realisation of the work appears quite different in technique.
Each of the works resonates its matter with the next, helped by the sound created for the show. Nothing is static, it’s all alive, and each appear to dance through the rhythmic vibrations within their constructed category, whether it be high definition ink jet print or ink painted on canvas.

For ‘In NO time’ Jonnie Wilkes has produced a limited edition vinyl ‘German Pizza Party’, released by The Vinyl Factory, London and The Modern Institute.

Matt Connors (b.1973, Chicago) lives and works in New York. Connors graduated with an MFA from Yale University School of Art in 2006. He has exhibited throughout Europe and America, recent solo exhibitions include those at: Cherry and Martin, Los Angeles (2014); Herald Street, London (2013); MoMA PS1 (2012); and Kunsthalle Düsseldorf, Germany (2011). Connors has an upcoming solo exhibition at CANADA, New York in 2014.

Luke Fowler (b.1978, Glasgow; Lives and works in Glasgow) is an artist, filmmaker and musician. Fowler was awarded the inaugural Derek Jarman Award in 2008 and nominated for the Turner Prize in 2012. He has shown his work internationally within exhibitions, film festivals and screenings. Selected solo exhibitions include those at: The Hepworth, Wakefield (2012); Inverleith House, Edinburgh (2012); CCS Bard Galleries, New York (2011); and Serpentine Gallery, London (2009). Fowler will be presenting work at the National Portrait Gallery, Edinburgh in 2014.

Isa Genzken (b.1948, Bad Oldesloe, Germany) lives and works in Berlin. Genzken is currently the subject of a major retrospective in the US, which is the first comprehensive overview of her body of work in an American museum, spanning the last 40 years of her practice. ‘Isa Genzken: Retrospective’ opened in MoMA, New York in 2013, the exhibition is touring to several major museums in America throughout 2014. Genzken began exhibiting in the 1970s and has shown work in numerous museums and galleries worldwide. Genzken represented Germany in the 52nd Venice Biennale in 2007.

Sue Tompkins (b.1971, Leighton Buzzard) lives and works in Glasgow. Tompkins has been involved in a variety of exhibitions and performances in Europe and America, including recent solo exhibitions at: GoMA, Glasgow (2014); The Modern Institute, Glasgow (2013); Portland Museum of Modern Art, Portland (2013); and Midway Contemporary Art, Minneapolis (2013). She has performed within numerous exhibitions and recently presented her new work ‘Orange Brainwash Tribute’ live for BBC Scotland. In 2014 Tompkins will present a new sound piece with Inverleith House, Edinburgh, as well as works in the National Gallery, Edinburgh and a performance at Tramway, Glasgow.

Jonnie Wilkes (b.1967, Belfast) lives and works in Glasgow. Wilkes has been involved in exhibitions within the UK and Europe, including those at: The Modern Institute, Glasgow (2009); Kiasma Museum, Helsinki (2000) and CCA, Glasgow (1997). Since 2001 Wilkes has predominately worked as a DJ and electronic music producer, and is one half of the DJ duo Optimo.

The Modern Institute would like to thank Klipsch UK, Loud & Clear, Glasgow, and on behalf of Luke Fowler, Cathlin Macaulay and the School of Scottish Studies Archives.