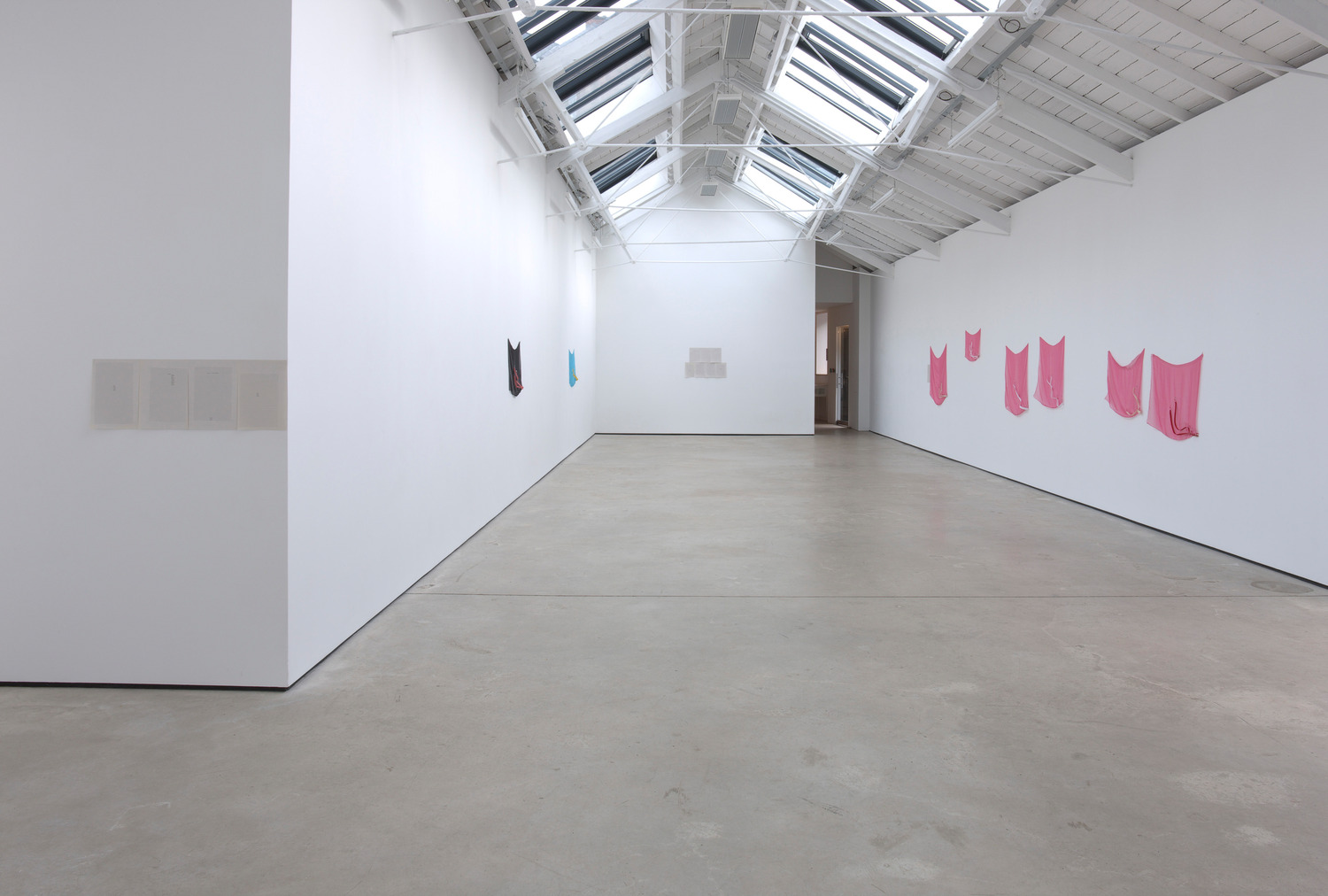 The Modern Institute is delighted to present an exhibition of new work by Sue Tompkins. For the artist’s third exhibition at the gallery, Tompkins will show a series of typed text constructions on paper, chiffon fabric works and performed ‘Hallo Welcome to Keith Street’. Tompkins’ performances have been described as “strung-out exercises in associative free thought: performance poetry that moves from the page to the voice, from speech to song, from song to signal, from signal to pure sound.” Familiar with being on stage, as lead singer with now disbanded post-punk group Life Without Buildings, Tompkins’ translates her personal experiences with disarming emotional immediacy and excitement.

Working with fragments of language written and gathered from everyday encounters and experience, familiar phrases are disguised and odd unions are made through repetition and intonation. The words Tompkins’ selects are charged with emotion and humor as well as melancholy and pathos. On the page the words communicate as language but also as objects inhabiting space, as concrete poems. When performed, her meticulously gathered and edited texts are delivered with pauses, stresses and repetitions, which build a vivid, emotional and personal atmosphere with the audience.

The new series of chiffon hangings, titled Odyssey, are fragile, ephemeral objects, which hint at transcendence between worlds and times. Each chiffon piece is sliced by zips attached by safety pins. Each zip, generally placed in the lower right-corner is a different colour, with some pinned in place open and others closed. Tompkins has suggested that each zip attempts to describe the process of making a decision, the zipper being the moment where a choice becomes necessary. The formal qualities of these pieces contain a sense of possibility, always inherent when a new choice is made, securing it at a point in time.

All Tompkins’ works contain repeated and ritualistic, patterns and actions – undertaken alone when she is in her studio, they can be traced in her text and fabric works, and are then accentuated in her live performances.

Tompkins is working on a forthcoming online project, ‘My Kind Book’ with Dia Art Foundation, New York (2011). She has had solo exhibitions at galleries including Inverleith House, Royal Botanic Garden Edinburgh (2011), mima Soundspace, Middlesbrough (2010), The Showroom, London (2007) and Spike Island, Bristol (2007). Her work has also been shown as part of the 29th Sao Paolo Biennale, Sao Paolo (2010), ‘In the Days of the Comet’,British Art Show 7 at the Hayward Gallery, London and touring (2010-11), ‘The Malady of Writing. A project on text and speculative imagination’ at MACBA, Barcelona (2009), ‘Poor. Old. Tired. Horse.’ at ICA, London (2009), ‘Heaven’, the 2nd Athens Biennial (2009), ‘Word Event’ at Kunsthalle Basel, Basel (2008), ‘Learn to Read’ at Tate Modern, London (2007) and ‘If I can’t dance, I don’t want to be part of your revolution’ at De Appel, Amsterdam and Artists Space, New York (2006). She was short-listed for the Beck’s Futures prize at ICA, London (2006). She has recently produced her first book, LongHand with LemonMelon. She was born in Leighton Buzzard, and currently lives in Northamptonshire.